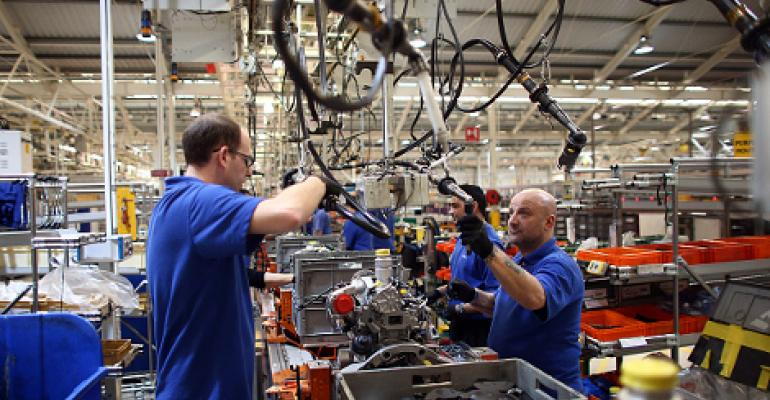 An employee works on an engine production line at a Ford factory in Dagenham, England, 2015. (Photo by Carl Court/Getty Images)
Design

Micro-Data Centers Out in the Wild: How Dense is the Edge?

As places like factories, big stores, and logistics warehouses get increasingly instrumented and automated, demand for computing capacity to process the data those instruments generate in real-time is growing, fueling the rise of micro-data centers, which provide a relatively simple way to extend the edge of the corporate network to these facilities.

This beast is different from the edge data centers built by companies like EdgeConneX, the relatively large colocation facilities, where the networks of content providers like Google and Netflix end, their traffic picked up by last-mile ISPs who take it to their end users.

The micro data center on the factory floor, for example, is the edge of the network whose core is the enterprise data center, often located far away from the plant. Data collected from factory equipment gets processed at the edge, and only a small fraction of it is sent back to the core.

How big are these edge deployments, and what is their power density? By most industry accounts they will only grow in number, so those are important questions to ask. For answers, we turned to Alex Pope, director, unified infrastructure, at Vertiv (formerly Emerson Network Power), who’s seen firsthand many micro data center deployments by the company’s customers, under its previous and current brand. (Disclaimer: the company was still Emerson at the time of the interview.)

At least today, power densities in most edge deployments are similar to average densities in enterprise data centers. According to Pope, edge nodes in telco central offices tend to be higher-density, while edge computing infrastructure in office buildings, retail outlets, and manufacturing facilities ranges from 3kW to 6kW per cabinet, in rare cases reaching as high as 10kW.

In offices, micro data centers run corporate applications locally and support connectivity to central enterprise server farms. Typical density is 2kW or 3kW per cabinet, and most deployments are single cabinets, which is low enough to require no dedicated cooling capacity. “It’s small enough that if you do the room right you don’t need active cooling,” Pope said.

His assessment is that we’re in the early days of micro-data centers in offices, and that this category of edge deployments will be the last to see substantial increases in compute requirements.

Retail outlets on the other hand are growing their in-store computing capabilities. Pope and his colleagues often see multiple networks in a single store, where security systems, registers, and inventory management will run on separate networks.

There’s also growing use of big data analytics in stores, as retailers try to identify shoppers who walk in in real-time and offer them discounts or advertise products they’re most likely to purchase, making the brick-and-mortar shopping experience more like shopping online.

Some retailers will even provide more or less network bandwidth to your device based on how important of a customer they think you are, Pope said. Someone who’s likely to make a big purchase will have faster WiFi, for example, while a child watching Netflix will see grainy video on their screen.

Probably the biggest growth driver for compute capacity in stores today is security, as retailers install more and more surveillance cameras that generate more and more data that needs to be stored and processed, he said.

While typical edge data center power density in these locations is 3kW to 6kW, Pope has seen deployments at 8kW to 10kW. Total capacity per site ranges from 40kW to 80kW.

In the Distribution Warehouse

Take one hop back on the travel path of a consumer product – to the distribution warehouse – and you’ll see more edge compute capacity. As retailers compete with Amazon, they’re stepping up their home delivery game, which means putting more distribution centers closer to where customers are (many former stores get converted to warehouses for this purpose).

And distribution centers need compute power to manage transactions, inventory, and shipping data to ensure you get your orders as quickly as possible. Onsite systems that manage this can total anywhere from 40kW to 200kW, with power densities in the 6kW to 8kW range.

On the Factory Floor

Shifting attention from the distribution warehouse to the manufacturing floor, you will see computing systems of density similar to that in retail outlets: 3kW to 6kW. There can be anywhere from five to 15 cabinets per plant, Pope said.

Factories often use the hub-and-spoke architecture, where distributed networking equipment around the campus collects sensor data and passes it along to a centralized computing room for processing. “Most of the production is run by those centralized compute rooms,” he said.

The Edge of the Telco Cloud

Computing rooms are also what many telo central offices are becoming. As telcos transform their networks to support virtual network services and automate network management using software, a telco network becomes a cloud, while the central office becomes a cloud edge node.

This is where you’ll see some of the higher-density micro-data center deployments, in the neighborhood of 8kW to 10kW per cabinet. Like retail distribution warehouse edge nodes, central office data centers range from 40kW to 200kW total per site.

While there are energy efficiency benefits to these self-enclosed, bite-size bits of IT infrastructure, the main reason micro-data centers are popular across the aforementioned edge computing use cases is simplicity of procurement and deployment, Pope said. Customers pick from a menu of configurations and get a single product, including everything from power and cooling equipment to fire suppression.

Capacity of the edge nodes is expandable, and vendors design them with the expectation that customers may eventually want to add UPS battery capacity, cooling, or racks. Pope noted that he sees more customers planning for expansion at the edges of their networks. “We see that absolutely being part of the plan,” he said.