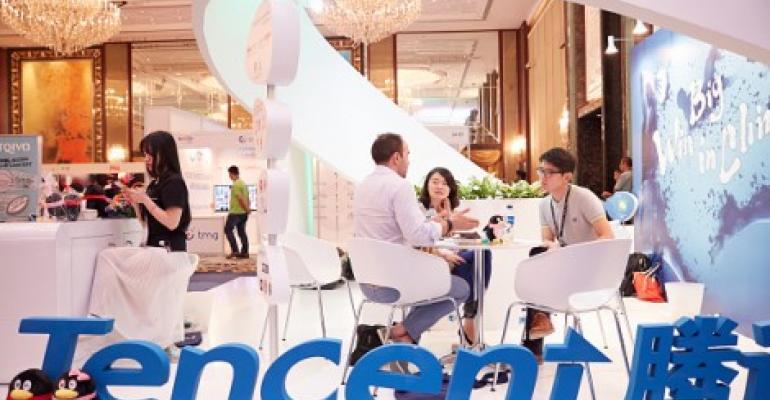 Visitors and exhibitors network at the Tencent booth during the Sportel Asia Conference in March 2016 in Singapore. (Photo by Sean Lee/Getty Images for Sportel)
Cloud

As conducting business in China grows increasingly challenging for American technology companies, Silicon Valley rolled out the welcome wagon for the country’s internet behemoth Tencent, which just announced the opening of its first data center in the US.

Tencent Cloud joins another Chinese giant, Alibaba, and Chinese data center provider 21Vianet, both of whom have computing facilities in the sprawling technology hub.

For Tencent, the expansion to Silicon Valley illustrates the $233 billion company’s commitment to growing its cloud services client base in the US— where Amazon Web Services owns about 40 percent of the market, more than juggernauts Microsoft, Google, and IBM combined, according to the Synergy Research Group.

Although Tencent faces stiff competition, if IDC’s prediction that the public cloud market will double in just three years to $195 billion by 2020 comes even close, there’s certainly potential to capture its share.

Tencent has its cloud sights set on more than the US, though. The company also announced plans to open data centers in Frankfurt, Mumbai, Seoul, and Moscow. The new data centers serve Chinese companies looking to go overseas, as well as international companies expanding their businesses in China or other parts of the world. The company’s cloud revenue more than tripled year-on-year in 2016 as both the number of enterprise accounts and usage of existing accounts increased substantially, according to a press release.

“We want to enhance our overseas cloud capability to meet the rising demand from companies around the world as they look for fast, reliable, secure and cost-effective services during the global expansion and migration to the cloud era,” Rita Zeng, vice president, Tencent Cloud, said in a statement. “I am confident that we can meet their needs with our technical capability, global network, as well as experience accumulated in serving the massive user-base in our home market.”

Tencent’s main revenue producer is its social platform, which has 90 percent penetration in China. It is also the top provider of online games, owning 100 percent of Riot Games and 84 percent of Supercell.