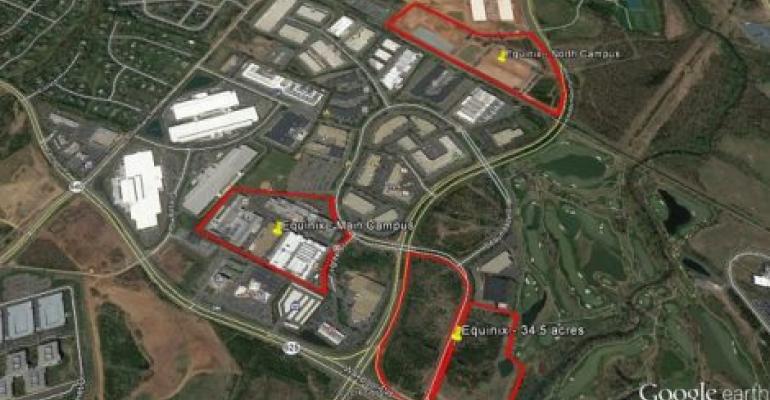 Land near the main Equinix data center campus in Loudoun County, Virginia, core of the Northern Virginia data center market, is now more valuable than ever, as evidenced by a recent land deal in the area by the colocation and interconnection giant itself.

Equinix has expanded its Ashburn land holdings by paying $34.5 million to acquire four land parcels totaling 34.5 acres, according to county records. This resets the high bar to $1 million per acre for land adjacent to the campus that housed the original MAE-East "Network Access Point." MAE-East was a carrier-neutral peering point that interconnected long-haul fiber backbones to help create the internet as we today know it.

The price is a record high for large, data center-scale parcels in Ashburn, Allen Tucker, managing director at the Tysons Corner office of the real-estate brokerage Jones Lang LaSalle, said in an interview with Data Center Knowledge. Tucker, a Mid-Atlantic region data center expert, said the deal reinforces Northern Virginia's position "as the premier data center market given its excellent internet connectivity with more fiber than any other global market."

The property is adjacent to the main Equinix campus, at the corner of Waxpool Road and Beaumeade Circle, near Loudoun County Parkway. (Source: Loudoun County records)

By purchasing land suitable for a future "Equinix 3.0" data center campus, the company is placing a defensive pin in the map of the Northern Virginia data center market. Equinix is widening its moat by preventing a competitor with deep pockets from opening next door.

The company is now adding a third property to its existing pair of Boardwalk and Park Place-like campuses, high-end hotels for data.

The $1 million-per-acre sale price equates to just under $23 per square foot for the land, or even higher if you consider the cost of carrying the land on the balance sheet for several years.

This transaction could also have implications for data center design trends in Loudoun County, which is facing a supply shortage for land parcels big enough for data centers. A typical single-story data center footprint might cover just 35 percent of the land. The high price of land in Loudoun County may begin to accelerate a trend toward two-story or three-story data center designs, which would help new development compete, since higher floor area ratios, or FARs, help reduce cost per square foot.

New developments by CyrusOne, Digital Realty Trust, Equinix, and others are using multi-story designs to help pencil out competitive deals while still generating the double-digit returns on invested capital that shareholders have come to expect.

Growing Up in Ashburn

"The company has been adding a new data center in Northern Virginia every 18 to 24 months since it built its first facility there," Howard Horowitz, global head of real estate at Equinix, told DCK in an interview in 2015. “And I don’t anticipate that changing.”

Read more: Equinix Doubles Down in One of Internet’s Most Important Locations

It appears with the secular tailwinds of cloud computing, SaaS, streaming content, the Internet of Things, and virtual reality, Equinix's growth in the Northern Virginia data center market will not be changing any time soon.