Small to medium-sized cloud providers only make up 18 percent of the overall public cloud services market, according to the latest data by Synergy Research Group, as Amazon Web Services (AWS) continues to hold the lion’s share of the public cloud market.

According to the latest numbers, Amazon Web Services (AWS) has more than 40 percent of the public cloud services market, with Microsoft, Google and IBM accounting for 23 percent of the total public IaaS and PaaS market. The growth of these cloud behemoths is coming at the expense of smaller cloud providers, whose market share has dropped four percent in the fourth quarter of 2016 compared to the same time last year.

Synergy estimates that quarterly public cloud infrastructure service revenues, which include both public IaaS and public PaaS, have reached over $7 billion, and continue to grow at the staggering rate of almost 50 percent per year. If managed private cloud services are included, that quarterly revenue number balloons to over $9 billion.

Last week, Amazon released its financial results for the fourth quarter of 2016, where its cloud division AWS reached $3.53 billion in revenue, up 45.8 percent year over year, with all customer segments contributing to the growth. 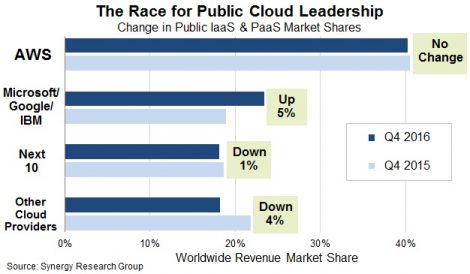 In the managed private cloud space, IBM and Rackspace lead the pack. But companies like Rackspace rely on the growth of AWS to some extent, as newly appointed Rackspace president Jeff Cotten said that its managed AWS business was the fastest growing area of business the managed cloud company has ever had.

“While a few cloud providers are growing at extraordinary rates, AWS continues to impress as a dominant market leader that has no intention of letting its crown slip,” John Dinsdale, a Chief Analyst and Research Director at Synergy Research Group said in a statement. “Achieving and maintaining a leadership position in this market takes huge ongoing investments in infrastructure, a continued expansion in the range of cloud services offered, strong credibility with the large enterprise sector, consistently strong execution, and the wholehearted and long-term backing of senior management. AWS is checking all of those boxes and any serious challengers need to do likewise.”