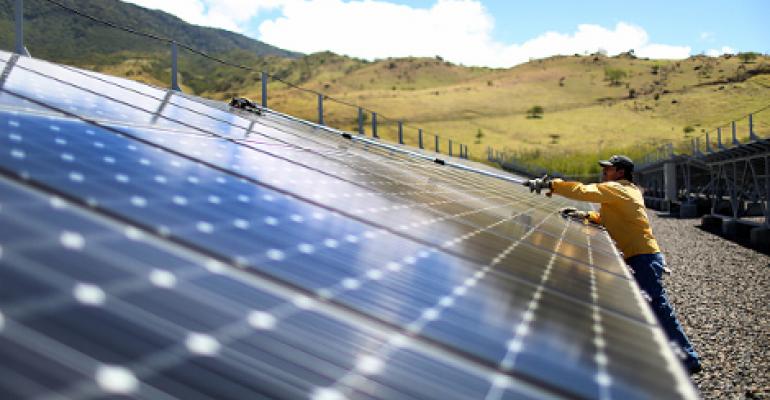 Apple has entered into a joint venture with the utility NV Energy to build a massive solar plant in Nevada to power the Apple data center campus outside of Reno, the companies announced this week.

Along with companies like Google and Facebook, Apple has emerged over the recent years as one of the leaders among large-scale data center operators in terms of the amount of investment and effort put into adding renewable energy generation onto the portions of the electrical grid that supply its data centers.

Like the other global-scale web platforms, Apple has committed to operating on 100 percent renewable energy, and as it continues to expand the infrastructure that supports its platform, it has to continue investing in renewables to deliver on that commitment.

Nevada is a heavily regulated energy market and as such presents a number of challenges in sourcing renewable energy at utility scale, which is the scale required for mega data centers like the ones Apple builds. Apple’s first solar project in the state, the 20 MW Fort Churchill Solar PV, was financed and built by Apple, but NV Energy operates the plant and manages its energy output.

It’s unclear what the arrangement will be for the new project, but NV Energy said it plans to seek permission from the state utility regulator to sing a power purchase agreement for the future plant’s output.

It is difficult to circumvent the utility and buy renewable energy directly from a producer in Nevada. A company that wants to do that has to apply for regulatory approval and can be blocked if the regulators decide it will have negative effect on the utility’s other customers. It took Switch, operator of massive data center campuses in Las Vegas and Reno years of negotiations and court battles to untangle itself from NV Energy and buy renewable energy for its data centers, although its “exit fee” may be as much as $27 million.

Apple has taken a different route, choosing to go in on a joint venture with the utility.

The future solar plant’s capacity will be 200 MW. The companies expect it to come online by early 2019. Up to 5 MW of its output will power a future solar subscription program for residential and commercial customers the utility apparently has in the works.

The Apple data center campus in Reno Technology Park continues expanding. Before it had a chance to complete building out the first set of data centers, collectively referred to as Project Mills, the company applied for permits to build another adjacent complex.

According to the most recent data the company has made available, it was 93 percent renewable worldwide as of one year ago.

To offset the energy use of its Maiden, North Carolina, data center, Apple uses a combination of its own solar plants (almost 60 MW total), a biofuel-powered Bloom Energy fuel cell plant, and solar energy it buys from the utility, Duke Energy. Energy consumed by the Apple data center in Newark, California, is offset by energy generated by wind farms in the state. To offset consumption by its data center in Prineville, Oregon, Apple mostly buys wind energy from the local utility, while about 10 percent of its load is generated by micro-hydro systems the company built to harness energy from water flowing through irrigation canals.

The company expects to launch a data center in Athenry, Ireland, this year, which it said will run on 100 percent renewable energy sourced from turbines that harness wave energy along the coast. Another Apple data center coming online this year is in Viborg, Denmark. The company has not yet specified renewable-energy plans for that facility.

Its most recently announced data center project is in Mesa, Arizona. The company said that site will also be fully powered by renewable energy (primarily solar).

In addition to operating its own data centers, Apple leases space from third-party data center providers. The company says it is working with those providers to get them to 100 percent renewable energy too.

One of those third-party data centers is in Singapore, where real estate constraints don’t allow any kind of utility-scale solar installations. To address that problem, Apple partnered with a local company to source power (about 32 MW) from rooftop solar panels on more than 800 buildings in the tiny island nation. According to Apple, that capacity is enough to compensate for energy consumption of its offices in Singapore and its footprint in the data center.