How Cloud is Changing the Colocation Data Center Market

As they suck smaller workloads away from colos and lease up wholesale space, public clouds are causing tectonic shifts in the market

The global colocation market size reached $33.59 billion in 2016, including both retail and wholesale services, Structure estimates. The firm expects it to grow 15.2 percent this year. 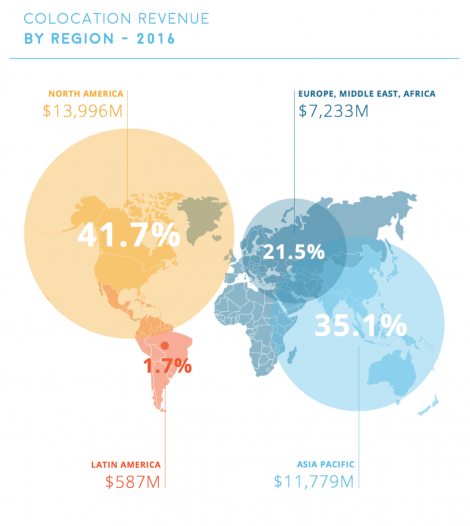 Numerous factors are responsible for the changes in growth rates between wholesale and retail, but the role of massive-scale public clouds by the likes of Amazon and Microsoft is the biggest one, according to Structure. Microsoft, for example, last year signed leases totaling more than 125 MW of data center capacity in the US alone, according to the commercial real estate firm North American Data Centers.

In its attempt to catch up to rivals, Oracle leased more than 30 MW in seven wholesale data center deals in the US in 2016. While nowhere near the capacity Microsoft took down, this was a lot more than Oracle had leased in the past. The company recently launched cloud availability regions in Northern Virginia, London, and Turkey, following the launch of its first region in the Phoenix market. Each region starts with a multi-megawatt two- or three-site deployment, and Oracle is nowhere near being done with expanding the geographic reach of its new cloud platform.

About two-thirds of the nearly 30 largest data center leases signed in 2016 in North America were signed by hyperscale cloud service providers, according to NADC. In addition to Microsoft and Oracle, they included Salesforce, IBM SoftLayer, and Box.

Growth Slowing Down for Smaller Players

The trend doesn’t mean the retail colocation data center market is declining, Structure pointed out. It remains a healthy market that’s “on a positive growth trajectory.”

Most of the growth, however, is concentrated at the top of the market, driven by the largest providers, Jabez Tan, research director at Structure, who co-authored the report, said in an interview with Data Center Knowledge. The bottom and middle of the market are seeing growth slow down as cloud providers chip away at the overall retail colocation revenue.

The addressable market for smaller colocation providers who aren’t operating at multi-region scale is shrinking, as they are essentially targeting local small and mid-size businesses, and those businesses are prime candidates for moving applications to the cloud. Many smaller providers have been trying to accelerate revenue growth by adding more sophisticated managed services capabilities, Tan pointed out, but “a lot of them are not growing as fast.”

Another major change being forced by the cloud is a shift of focus from carrier neutrality in colocation data centers to cloud neutrality. As more and more enterprises move workloads to the cloud, data center companies expect them to want to use multiple cloud providers, so offering easy access to as many clouds as possible has become a big part of the strategy for colocation providers.

Some providers (especially Equinix) have been talking about the need to enable multi-cloud strategies for data center customers for several years now. However, there is no evidence that actual multi-cloud deployments are taking place en masse. For now, multi-cloud appears to be more of a table-stakes effort for colo providers. “I’m seeing it in very early stages,” Tan said. “It’ll start to develop over time.”

Another future development Structure is projecting is that Asia Pacific will soon outgrow North America in terms of colocation data center market share.

China will continue driving most of the growth, but the region is replete with emerging markets, such as Malaysia and Thailand, feeding on the momentum in mature markets, such as India, Japan, Singapore, and Australia, Tan explained. This combination will result in Asia Pacific outgrowing North America’s colocation data center market share by 2020, according to Structure’s projections.

Here’s how Structure estimates the balance of power in the global colocation market will shift over the next three years: 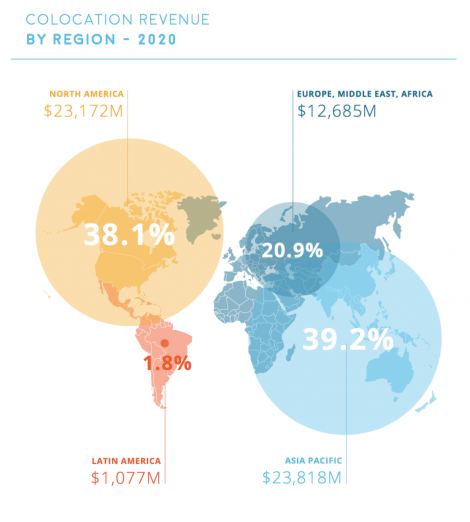