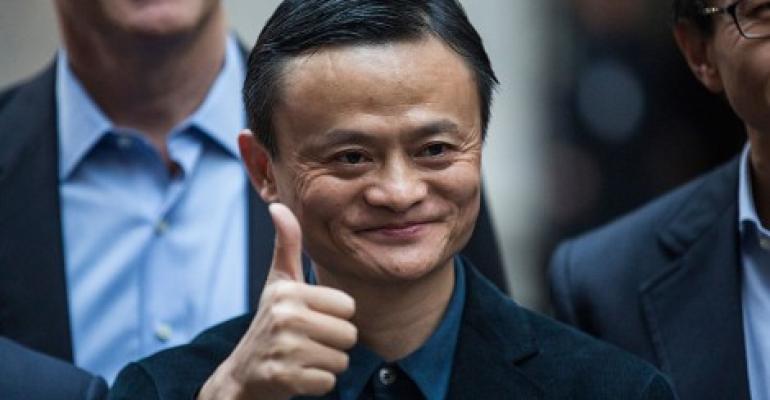 (Bloomberg) -- Alibaba Group Holding Ltd.’s deal to sponsor the Olympic Games through 2028 is worth $800 million, according to a person familiar with the matter.

The agreement, the biggest in the Olympic movement’s history, would help the Chinese e-commerce giant gain exposure across the world, putting it on the same footing as a dozen or so “ TOP” Olympic partners, like Coca Cola Co. and Samsung Electronics Co. in the highest rung of sponsorship. Alibaba will provide online computing services and data analytics for the sporting contest, while creating a marketplace for official merchandise. It will also help develop an online video channel for viewers in China, the world’s largest consumer market.

“This is so much more than about marketing or sponsorship," said Michael Payne, a former marketing head of the  International Olympic Committee who was part of a team that put the deal together with Beijing-based sports consultancy Shankai Sports. “It is potentially the single biggest, groundbreaking partnership the IOC has done to date.”

Neither the IOC nor Alibaba disclosed the size of the agreement. Alibaba declined to comment on the reported financial terms and the IOC didn’t respond to an e-mail seeking comment.

Alibaba becomes one of the few Chinese sponsors, such as Lenovo Group Ltd., to pay for the right to sport the iconic five-ring logo. The agreement also makes Alibaba the first Chinese company to sign on as a partner for the 2022 Winter Games in Beijing. The company typically eschews costly marketing, but is keen to showcase its nascent cloud computing business on an international stage while reaching out to consumers around the world. For the IOC, its involvement spells greater Chinese engagement and, potentially, revenue.

"It’s an insightful deal by (Alibaba founder) Jack Ma, in the sense that it makes Alibaba instantly as credible as a company like Coca Cola, Visa, or McDonald’s,” said Rick Burton, a professor of sport management at Syracuse University and a former U.S. Olympic Committee chief marketing officer. “For Companies in the U.S. like Amazon or Google or Facebook, it’s symbolically launched Alibaba as an international player to be reckoned with.”

The IOC’s sponsorship agreements are typically part cash and part service, with companies providing their expertise to help put together Olympic Games. In return, the companies get the biggest platform to showcase their skills, according to Tim Crow, chief executive officer of London-based Synergy, a sports-marketing consultancy that supports Olympic sponsors.

For Alibaba, the partnership also adds pressure on the company to fight sales of counterfeit merchandise. In December, the U.S. Office of the Trade Representative added Alibaba to its "notorious marketplaces" list of companies that violate intellectual property rights.

As host to more than 12 million businesses that sell more than a billion items, policing such a vast digital world is difficult, Alibaba’s Ma said in a press conference at the World Economic Forum in Davos, Switzerland, when asked about seemingly counterfeit Olympic memorabilia on the site.

The company has roughly 2,000 people working on the problem and is adding new technology to better scrub its sites, Ma said. "It’s difficult to clean all the dirty things in one night," he said.

It’s been almost a decade since Chinese enthusiasm for the Olympics peaked with the 2008 Beijing Summer Games, when the country emerged as a dominant athletic powerhouse. The nation’s medal showing at the Rio de Janeiro games last year, however, was criticized back home.

Major Chinese businesses have started investing heavily in sports amid a call from the country’s government to grow the sector. A national plan announced in 2015 contains the audacious goal of spurring an industry worth 5 trillion-yuan ($747 billion) by 2025.

Since then Chinese companies, led by some of the country’s richest men including Ma and Dalian Wanda Group Co. Chairman Wang Jianlin, have secured assets at home and abroad. Wanda in 2015 became the first top tier sponsor of soccer governing body FIFA.

Alibaba will kick off its Olympic tour in Tokyo in 2020. Companies including Canon Inc., Nippon Life Insurance and Fujitsu Ltd. are already paying upwards of 15 billion yen ($125 million) for their own partnerships, according to Japan’s Kyodo News.

The move dovetails with its long-term ambitions. Alibaba wants to get half its revenue from outside its home country, yet as of 2016 three-quarters of sales still come from China. It’s been touting that dominant home-market share to try and get U.S. merchants to use its sites to sell to Chinese consumers -- a way to offset slowing growth at home -- but Alibaba remains an unfamiliar name to many.

Its cloud business -- modeled on Amazon.com Inc.’s AWS -- is its most international and, though just a few years old, is already close to breaking even. Alibaba has now placed cloud at the heart of its global expansion, eyeing top share in Japan in two years and beefing up its presence from the Middle East to the U.S. The service already hosts more than a third of China’s websites.