Digital Realty Signals the Gloves are Coming Off in 2017

After two years of austerity, the REIT is planning to spend up to $1B on data center construction this year

Digital Realty Trust appears ready to step on the gas in 2017.

After a two-year focus on leasing up finished inventory and limiting speculative development, the San Francisco-based data center REIT's outlook for 2017 includes spending up to $1 billion on new data center construction.

Digital, one of the world's largest data center landlords, released its initial guidance after the bell on January 3, prior to presenting the next morning at the Citi Internet, Media and Telecom conference. Its upbeat presentation described a one-two punch: first flexing the company's considerable balance-sheet muscle to ramp up development in 2017 and then staking out its claim as a low-cost provider in the wholesale data center market.

When Bill Stein took the reins as CEO back in 2014, he immediately put a halt to speculative development of powered shells and focused on leasing up existing inventory to drive higher returns for shareholders. There has also been an initiative underway to dispose of non-core properties, which is winding down.

Last year at the Citi conference the emphasis was on partnering with customers like IBM and AT&T to land enterprise customer hybrid cloud deployments. (More on that here: Digital Realty Leans on IBM, AT&T to Hook Enterprises on Hybrid Cloud)

During 2016 there were many large data center deals signed with hyperscale cloud providers, who were (and still are) looking for speed to market and attractive pricing for 10MW-30MW deals. Digital didn't sign as many of those deals as some of its competitors did in the first half of the year.

This year its Citi presentation had an underlying drumbeat of a more flexible development program in top markets with an eye toward "longer-term value creation." This was in addition to capital being deployed to support overseas expansions, including phase-one developments in Frankfurt and Osaka.

The company's CTO, Chris Sharp, also emphasized the evolution of Digital's higher-margin colocation and interconnection offerings, including the Service Exchange initiative, which can provide scalable, elastic private access to public cloud providers. Digital is leveraging a partnership with Megaport to provide this "connectivity as a service."

All of these projects are encompassed in the $800 million to $1 billion CapEx guidance for 2017. 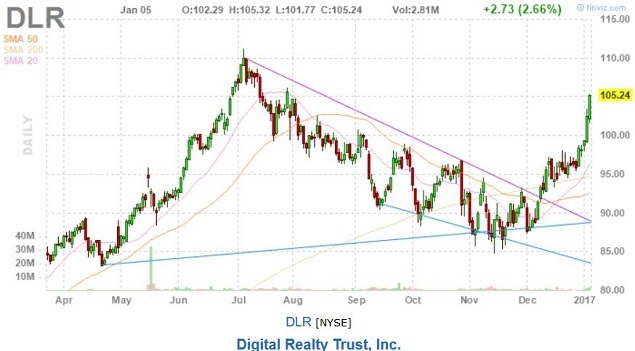 At this point, with the exception of finding a scale location in Tokyo, Stein feels that the existing portfolio has sufficient pins in the map to support Digital's global strategy.

While some of data center provider Interxion's assets in Europe were described as attractive, any acquisition still has to meet the criteria of being: 1) strategic; 2) accretive to shareholders on a risk-adjusted basis; and 3) capitalized on a leverage-neutral basis.

Digital has been trying to solve the Tokyo riddle for several years. So it did not sound like M&A would be factoring into the equation, at least during the first half of 2017.

There was a lively discussion surrounding confusion regarding "all-in" costs per MW not being apples-to-apples across the industry.

Stein was quite direct in his discussion of Digital's 13-year history of optimizing supply chain with vendors and having a clear cost of capital advantage compared with REIT peers. Another point emphasized was that build-to-suits for single-tenant hyperscale 10MW-30MW requirements are cheaper than developing multi-tenant data centers.

Digital suggested that analysts and investors need to look at what is included on a consistent basis. Is it just the cost of IT load, or is the full redundancy included? What about land, carry cost, and leasing commissions?  Digital includes all of the hard and soft costs on a consistent basis, according to Stein.

CFO Andy Power addressed the elephant in the room when he said that Digital builds the lowest cost product. I suspect this topic will be revisited multiple times during 2017.

Despite the rising interest rate environment Digital expects to be able to issue $400-$600 million of long-term debt in mid-to-late 2017 at rates of 3.75-4.25 percent. This last point supports the Digital Realty assertion that it can be a low cost provider of wholesale data centers.

Leasing from a trusted third-party like Digital Realty can provide a time-to-market advantage for the massive public cloud, IT services, and software as a service providers.

However, one lesson learned from record cloud leasing during 2016 was the need to have adjacent land entitled for future development and powered shells where data halls can be built-out rapidly, in order to capture some of this "lumpy" demand. On the other hand, capital need to be deployed prudently in order to generate adequate returns for shareholders.

A "new normal" continues to evolve regarding what the net-absorption will be for large-scale deployments in major data center markets including: Northern Virginia, Dallas, Chicago, Silicon Valley and Portland/Seattle.