As it continues to pursue the opportunity to provide data centers enterprise IT shops move their on-prem infrastructure into, Equinix also has its eye on the cloud data center needs of the biggest hyperscale players.

The implication was that the retail colocation and interconnection specialist would consider signing a large-scale wholesale lease with a strategic partner to act as a magnet to attract regional and local colocation and interconnection customers in new markets. It's not unheard of for Equinix to do the occasional wholesale deal with a strategically significant customer.

When asked if public cloud was "friend or foe," Smith replied that "colo and cloud are natural allies." He expects enterprise customers to utilize small colocation deployments to take advantage of secure access to the Big Three and other cloud providers at Equinix IBX data centers.

Speaking at the Citi Internet, Media, and Telecom conference in Las Vegas, Smith reviewed a busy 2016 and went over highlights of the company's near-term strategy, which included catching "the next wave of cloud deployments," a focus on access to submarine cables, catering to the growing Internet of Things market, enabling new use cases for enterprise ecosystems, developing Software Defined Networking technology for WANs, and managing growth and culture of a company that's rapidly increasing in size. Over the last two years, Equinix acquired TelecityGroup in Europe, Bit-isle in Japan, and finished 2016 with the announcement of its blockbuster $3.6 billion acquisition of a broad portfolio of Verizon data centers in the Americas.

A consistent theme throughout a Q&A discussion with Smith at the conference was what he saw as the need to preserve the Equinix culture, with "the house growing taller and wider." Over the past two decades, the company has invested $19 billion to build out its global network and grown through 13 M&A transactions.

Post-Verizon, it will operate 175 data centers in 42 metros spanning 22 countries across Asia-Pacific, EMEA, and the Americas. Equinix today finds itself at an inflection point where the company is getting more complex to run, Smith said. While wanting to keep bureaucracy out and the organizational chart flat in hopes of retaining flexibility and speed, he also expects to continue to run selling, general, and administrative expenses at 22 percent -- the highest in the industry -- acknowledging that it was "part of the model."

Last year at the Citi conference, Equinix announced a goal of trippling its customer base over the following five to 10 years, with the majority of new customers expected to come from a dozen or so different industries. During the third quarter of 2016, for example, Equinix saw record bookings with financial services firms, which was partially due to adding the insurance vertical into that category.

The company says it has over 9,000 global customers, including one-third of the Fortune 500 and one-quarter of the Global 2000. Notably, 2,700 of them are companies that provide various technology infrastructure services, such as network and IT services, private and public cloud hosting, and managed services.

According to Smith, 55 percent of Equinix's revenue comes from large enterprises with infrastructure deployed in its data centers across all three regions: Americas, EMEA, and Asia-Pacific.

On average, the company adds 150 to 200 new logos per quarter with 60 to 70 percent of those falling into the enterprise bucket. However, there are between 300,000 and 500,000 small and medium enterprise customers who collectively spend more than $1 trillion each year, representing an enormous opportunity for a company like Equinix.

Bookings in the top urban markets around the world led the way for Equinix in 2016. In the US they were New York, Northern Virginia, Chicago, and Silicon Valley; in Europe they were Paris, Frankfurt, and London; and in Asia-Pacific they were Sydney, Singapore, Hong Kong, and Shanghai.

Read more: Why Equinix is Buying Verizon Data Centers for $3.6B 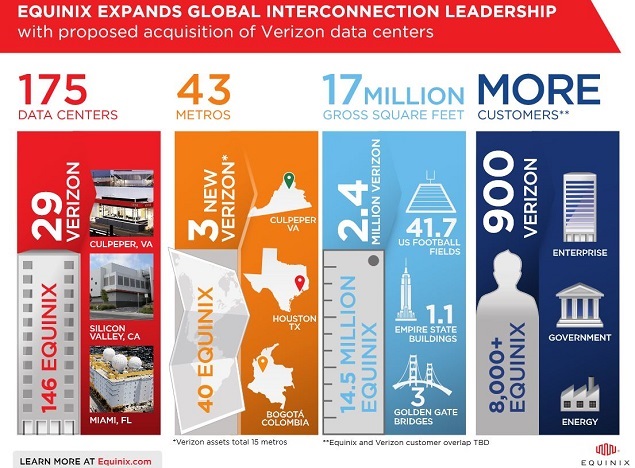 While acknowledging that there is certainly "competition around the edges," Smith believes that Equinix data centers, located at key control points, "can cover almost any enterprise requirement from its existing footprint."