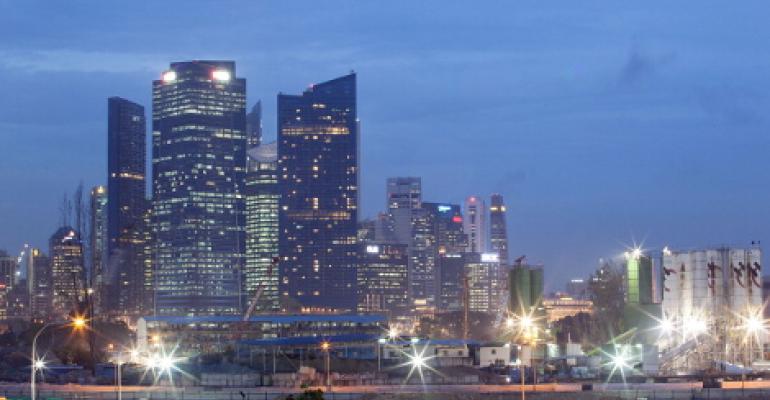 While Singapore has for years been the default data center location for US and European companies wanting to serve clients in Asia, the rise of the mega-clouds is changing market dynamics there as it has done in other major data center markets around the world.

Companies like Microsoft and Google have built their own data centers in Singapore and leased capacity from data center providers there. Social networks LinkedIn (now owned by Microsoft) and Facebook occupy leased data center space on the island. There’s also demand from Asian mega-clouds, such as Alibaba.

As they do elsewhere around the world – in places like Northern Virginia, Dallas, Chicago, and Dublin – these companies are generally after big multi-megawatt data center leases, driving more demand for wholesale data center services in Singapore than there has been historically.

That’s according to recent data on the Singapore data center market from Structure Research, which says the market profile has shifted to “one that is increasingly geared to wholesale deployments.” Most of the 150 or so megawatts of new data center capacity that would be coming online in 2016 and 2017 was being built for wholesale deals, Jabez Tan, research director at Structure, told us in an interview.

As Tan notes in an article for Data Center Knowledge that also ran this week, the trend toward wholesale can be observed in all major Asia-Pacific markets.

The Singapore data center market has been growing steadily over the last several years, but the analysts’ data shows its next phase of growth is being driven primarily by wholesale data center demand from cloud giants, pushing providers to build data centers at massive scale. That 150-plus megawatts would be delivered across only eight data centers.

Structure expects the Singapore market to generate $811 million in revenue in 2016 and grow 9 percent in 2017. The research firm projects the market will reach $1.6 billion in size by 2020, growing at a compound annual rate of 9 percent.

In addition to being one of Asia’s primary commercial and financial hubs, Singapore is a hub for international connectivity, with landing stations for submarine cables linking it to major Asia-Pacific markets in India, China, Japan, and Australia, as well as the numerous emerging markets in the region, such as Thailand, Vietnam, Indonesia, and Singapore’s next-door neighbor Malaysia. In short, if you want network access to virtually all Asia-Pacific markets from one place, that place is Singapore. The city-state’s robust infrastructure, political stability, and a business-friendly government also help.

There are 45 data center providers in Singapore as of 2016, with 53 unique operational data centers, according to Structure. Together, their critical power capacity is 240MW. The two top providers in the market are local telco Singtel and the Redwood City, California-based colocation giant Equinix. The two companies have a combined share of 55 percent in the Singapore data center market. Other top providers are Digital Realty Trust, Keppel Data Centers, Global Switch, and NTT Communications.

Not all demand for data center capacity in Singapore is coming from cloud giants of course. There are plenty of examples of smaller companies, such as system integrators and other IT service providers from China and elsewhere overseas, taking data center space in Singapore to serve clients throughout AsiaPacific.

Some of the recent examples include Retarus, a Munich-based messaging service provider, which announced a new data center in Singapore last month. The company lists Adidas, Bayer, Sony, and Honda as its clients. Another one is Fpweb.net, a St. Louis, Missouri-based managed cloud and security services firm, which announced a data center in Singapore earlier this month, promising it would reduce latency for its clients in Southeast Asia.

While data center providers building in Singapore are mostly after the lucrative multi-megawatt cloud deals, they generally don’t pigeonhole themselves into being strictly wholesale or strictly retail providers. A company may prefer wholesale deals but it will sign retail colocation deals as well, Tan said. It goes the other way too. Equinix, for example, a company that specializes in retail colocation inside its network-rich facilities, has done some wholesale deals in Singapore, he said. Equinix usually makes the exception if a major strategic customer wants a wholesale deployment.

Tan was not confident there would be enough demand for all the new wholesale capacity coming online in the 2016-2017 timeframe. Lots of empty facilities and only so many deals to go around usually means pricing for wholesale data center space will come down. “It’s pretty aggressive in terms of chasing after deals in Singapore,” he said.