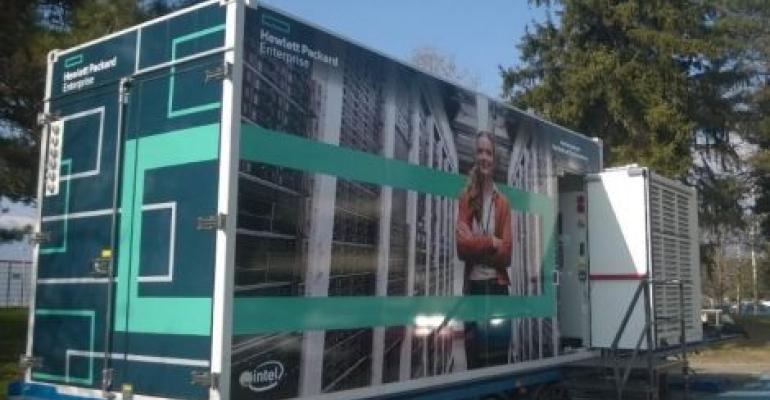 HPE and Schneider Electric to Partner on ‘Micro Datacenters’

The trend toward decentralizing data center resources gets a major collective endorsement, as the infrastructure provider and the leading server manufacturer produce a joint architecture.

Industrial automation provider Schneider Electric and Hewlett Packard Enterprise plan to announce a partnership on a templated, pre-configured architecture for what is being described as “a micro-modular data center for distributed IT and edge computing.” The announcement is set to come Monday afternoon during the data center, infrastructure, and operations management conference in Las Vegas Monday sponsored by analyst firm Gartner,

That product is being made available to HPE customers immediately, according to the company.

“HPE is announcing what they’re calling their Micro Datacenter,” stated Steven Carlini, Schneider’s senior director for data center global solutions, in an interview with Data Center Knowledge.  “They’re partnering with us for delivering this solution.

“What’s less interesting to the IT guys is physical infrastructure.  The enclosures, the VDUs [video display units], the cooling, the environmental monitoring, the door-open and door-closed security monitoring, that kind of thing.  Schneider is partnering with the IT OEMs, helping them deliver these smaller solutions easily and cost-effectively to the customers – what we call, drop-in-place micro data centers.”

HPE told us its role in the partnership will be to provide the base server hardware, which in this instance will come from its Converged System product line including its Hyper Converged servers, plus its new Edgeline servers.  The server maker has been recently marketing ConvergedSystem servers to customers that require large amounts of data be stored in close proximity to their operations – for example, to natural gas producers conducting seismographic operations at remote sites.

Schneider’s Carlini paints a picture of a complete drop-in-place, modular unit that can be assembled and deployed in a matter of a few days, with HPE hyperconverged servers and HPE management software ready-to-go, but also with operations management tools for Schneider’s drop-in-place infrastructure also pre-provisioned.

“This hybrid IT solution integrates data center infrastructure management (DCIM) with HPE OneView IT infrastructure management to provide a single management interface with a converged view of IT and data center facility from a customer’s centralized operations,” reads a statement from HPE Monday morning.  “In addition to pre-configured architectures, the HPE Micro Datacenter also supports custom configurations to the customers’ business requirements.”

“At Schneider, our goal is to be the standard physical infrastructure supplier,” remarked Carlini, “for all these next-generation micro data centers.  So we are working and partnering with the IT vendors’ office, and we’re designing some solutions that are going to have packaging to enable the IT vendors to integrate and ship their solutions within our micro data center solutions.”

Power, cooling, monitoring, and security will be Schneider’s contribution to the architectural platform, he said.

We asked Carlini whether Schneider’s expectation is that these drop-in-place modules will be customized for Internet of Things-related applications, especially given that HPE’s Edgeline servers will be among the options.

He told us that certain models will come equipped with gateways ready to be bridged with IoT sensors.  “There’s different packages from the vendors that are IoT specific, that we will put into the micro data centers,” he added.

Carlini’s phraseology – particularly referring to partner vendors in the plural – suggests that HPE is not the only server vendor who will be producing a modular micro data center infrastructure in the near term.