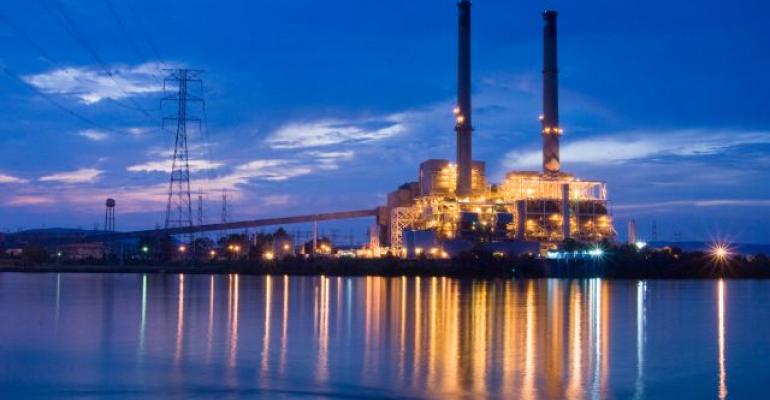 (Tennessee Valley Authority)
The Widows Creek fossil plant in Jackson County, Alabama, back when it was in full production. [Courtesy TVA]
Companies>Google (Alphabet)

An ambitious effort by Google to repurpose the Tennessee Valley Authority’s old Widows Creek power plant in Jackson County, Alabama, just across the Tennessee River from Chattanooga, does not appear to be proceeding on schedule.  Travis Leder, a reporter for the local ABC-TV affiliate, may not have been the first to notice, but he was the first to say that if Google intends to begin reconstruction as scheduled during 2016, there’s only one month left.

“We anticipate starting construction in 2016,” reads Google’s project page, even now.  Roden’s reporting cites the Bridgeport, Alabama, Chamber of Commerce president as saying Google has not been in touch with him about an operating schedule, since having told him it’s working out details about electrical power.

“They just don’t tell us a lot,” he told Roden.

Electricity should not have been the project’s big problem.  The Widows Creek Fossil Plant was a major coal-fired power production facility, so much of its electricity infrastructure is expected to be repurposed.

“Thanks to an arrangement with Tennessee Valley Authority, our electric utility, we’ll be able to scout new renewable energy projects and work with TVA to bring the power onto their electrical grid,” wrote Google senior manager for Data Center Energy Patrick Gammons, in a company blog post last year announcing the project.  “Ultimately, this contributes to our goal of being powered by 100% renewable energy.”

But Rosen’s reporting is just the tip of what would be considered a very long iceberg, if it weren’t coal black.  The old power plant, now completely retired, was one of the world’s major polluters.

A decade ago, the State of North Carolina sued the TVA, claiming that pollution flowing over state lines caused a public nuisance.  But a U.S. Fourth Circuit Court of Appeals ruling in 2010 found that the court system was too risky and problematic a place for states to settle the issue of who’s polluting whom.

“No matter how lofty the goal,” the Appeals Court’s decision read, “we are unwilling to sanction the least predictable and the most problematic method for resolving interstate emissions disputes, a method which would chaotically upend an entire body of clean air law and could all too easily redound to the detriment of the environment itself.”

But the lawsuit had already started an investigation into the extent to which the U.S. Environmental Protection Agency may have been missing vital clues that could help it protect public health.  In their joint 2011 report [PDF], the environmental advocacy group Earthjustice and the Sierra Club issued results of their scientific investigation, showing that water sampled from Stevenson, Alabama, in the vicinity of the Widows Creek plant, had tested with over 5,000 times the safety levels for the carcinogen hexavalent chromium (Cr(VI)) recommended by the State of California (which, of course, are not enforced in Alabama, but were used here as a benchmark).

Cr(VI), you may recall, is the same chemical that was the subject of the famous case that propelled crusader Erin Brockovich to fame.

Despite the final ruling in the TVA’s favor, the existence of the dispute and the findings of the Earthjustice report had already added to the TVA’s pressure to shut down the Widows Creek facility.

But just because the plant is shut down does not mean a residual threat to the water supply is no longer present.  And just because the TVA won the lawsuit, may not mean it remains wholly liable for cleaning up any public health threat that may remain to the local area, after Google takes full possession of the facility.