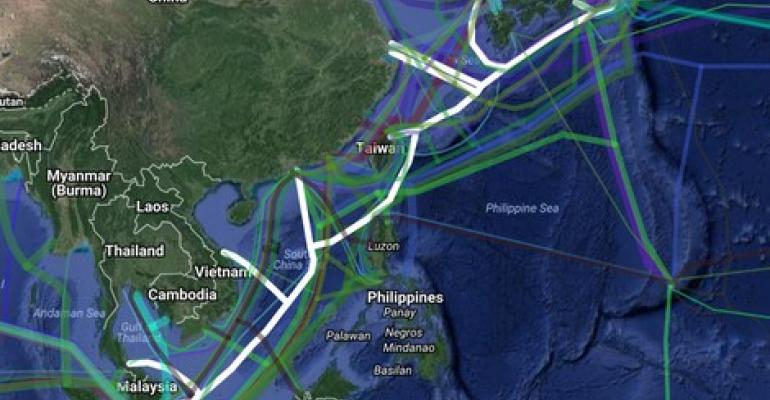 There would be a ribbon-cutting ceremony, except you’d need scuba divers:  One of the world’s most ambitious optical network connection projects is now officially complete, and beginning the process of opening itself up for business.  Japan’s NTT Communications, representing a partnership of major telcos in nine Asian countries, announced this week the commencement of service over the Asia Pacific Gateway (APG), a 10,400-kilometer span of fiber optic cable.

NTT boasts a theoretical capacity for APG of 54 terabits per second — much higher than the partnership’s original goal of 40 Tbps.  However, Greg’s Cable Map, which depicts live data for submarine cable operations worldwide, lists its operational capacity at 38.4 Tbps.

Still, the news will have already sparked celebrations in Vietnam, whose Internet service has been plagued by service problems ever since the Asia America Gateway cable (AAG) was launched in November 2009.  AAG has suffered from numerous ruptures, and finally efforts to repair it were indefinitely canceled last March, after repair crews reported they could not find the rupture point.

Southeast Asia Gets a Boost 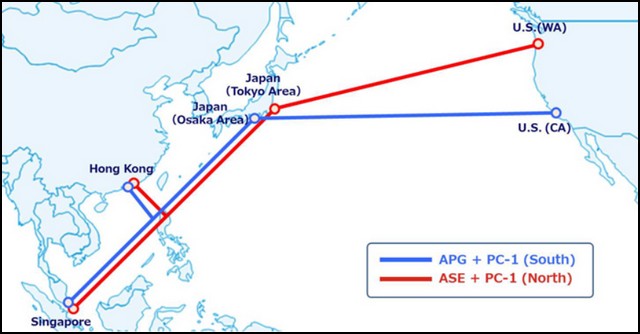 APG will link Da Nang with both Osaka and Tokyo.  From both points, NTT will manage junctions to the existing PC-1 loop, a 640 Gbps cable connecting Grover Beach, California, and Harbor Pointe, Washington.  Still, PC-1 has been in active service since 2001, and sub-terabit speed is not perceived as broad enough to support an Asia-based video service to North America.

Since South Korea will be the host country of the 2018 Winter Olympics, KT has an interest in being able to deliver multiple channels of live, Ultra-HD resolution video, capable of reaching all points of the globe at 5G speeds.

Three years ago, the Southeast Asia-Japan Cable (SJC) became operational, thanks in no small part to a considerable investment by Google.  Theoretical capacity for SJC is 23 Tbps.  But while it links Japan with China, Brunei, Singapore, and the Philippines, it skips over Vietnam and South Korea.

Facebook made an investment — albeit of undisclosed value — in the construction of APG in 2012.  Whenever Facebook gets into a new industry, either it immediately sparks controversy, or someone finds a controversy and attributes it to Facebook.

In this case, a regional tech publication speculated at the time whether Facebook had specific designs on the Asian market.  Had Facebook secured a special agreement with the Chinese government to sidestep its national firewalls and censorship boundaries, for instance?

One of these conspiracies has since been put soundly to rest: the question of why Facebook would invest in a cable project with no ties to America.  As we noted, NTT will handle the junction between Osaka, Tokyo, and two points on the American West Coast.

But last May, Facebook teamed up with Microsoft to invest in the construction of an all-new submarine cable across the Pacific Ocean.  Dubbed MAREA, this first new cable will be operated by Telxius Telecom, a new division of Spanish telco Telefónica.  In its announcement at the time, Telxius boasted an incredible capacity goal of 160 Tbps, some 256 times greater than PC-1.

And just last month, Facebook and Google were named as co-investors in a separate submarine project, a 120 Tbps line dubbed PLCN.

But one of the many 2012 Facebook conspiracies actually does still hold water, if only a few ounces:  Is Facebook interested in ensuring its Internet traffic across the Pacific steers clear of Russia, or perhaps Africa?

It sounds like the basis for an Ian Fleming novel, were he still with us (some say he’s gone into hiding), but it is a surprisingly legitimate question.  For the last decade, Russia has put forth proposals to the U.N.’s International Telecommunications Union that would put a consortium of state-run telecom regulators in an oversight role over Internet traffic.

While countries participating in a 2014 meeting mostly decided not to take that route, ITU study groups, operating under the auspices of Smart Cities and Internet of Things initiatives, are managing to raise the issue yet again.  And at an ITU conference in Tunisia just last week, the African Telecommunications Union raised the issue once again, in the form of proposed regulations for the makers of phone apps that could potentially be played on over-the-top (OTT) digital TV tuners.

Russian telecom officials are on record as supporting the rights of nations, as Internet stakeholders, to impose tariffs on certain types of traffic entering their territories — for example, taxing servers that spam citizens’ browsers.  Were such tariffs to become enforceable as law (not an impossibility, given the apparently cozy relationship between one U.S. presidential candidate and Russia), theoretically, Facebook could become liable whenever a Facebook user posts material that a Russian regulation defines as “spam.”

It would give a firm with the resources and capital of Facebook (or Microsoft, or Google) good reason to devote extra resources to hard-wiring the Internet, bypassing countries that would impose such tariffs.  The irony here is that China, in such a scenario, would be cast as the hero of free speech rights.  In any event, it’s not a bad reason, and at the very least a good excuse, to open wider channels of digital transactions across the Pacific.