CyrusOne released its Q3 2016 earnings print prior to the market open on Monday, and its shares initially took a nose dive, prior to the earnings call which was held midday.

Halloween got off to a spooky start for data center REIT CyrusOne shareholders after the company reported Q3 earnings on Monday, before the bell. However, CyrusOne's solid earnings, raised guidance, strong leasing, and massive pipeline of new deals appeared to be overshadowed by uncertainty surrounding the revelation of an unexpected CFO change.

CyrusOne shares were crushed in early trading prior to the start of the conference call held at 11:00 ET on Monday.  In what can only be described as a bipolar trading day, CONE shares initially plunged to a low of $40.82, or a drop of ~8 percent. This loss was halved during the conference call. By the end of the trading day shares had bounced back to within half a percent of Friday's close of $44.83 per share.

Here's what appeared to be driving this white-knuckle rollercoaster ride for investors.

In addition to the scheduled earnings release, CyrusOne's simultaneous announcement of a CFO change caught analysts and investors flat-footed.

CEO Gary Wojtaszek summed it up succinctly, "These things are never good…" answering a question on the earnings call regarding the sudden CFO transition. However, he immediately clarified his comment, pointing out that "Greg [Andrews] has done a masterful job here…" Notably, there will be a charge taken in Q4 for CFO Andrew's severance, another indication of an amicable parting of the ways.

The sting of this announcement was also mitigated by having already hired Diane M. Morefield to assume the CFO role. She is coming aboard in mid-November, which should provide time for an orderly transition. Morefield has an impressive resume, including extensive experience successfully managing the balance sheet of large, growth-oriented REITs.

Wojtaszek pointed out that CyrusOne now counts seven of the Top 10 cloud service providers as customers -- up from having none as tenants just 24 months ago. 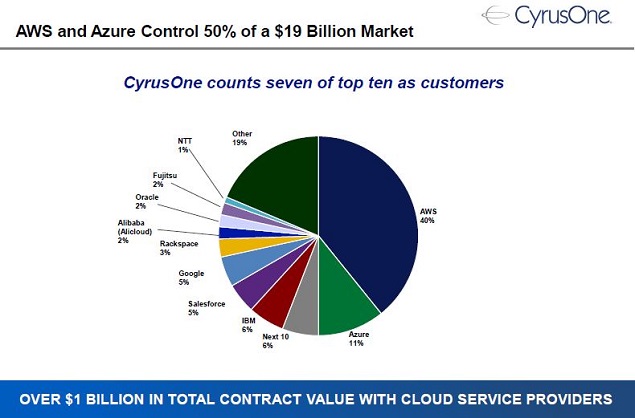 Wojtaszek said on the call that CyrusOne's late-stage deal funnel has almost doubled in size since reporting results for the quarter ended June 30, 2016.

Here are some of the highlights from the Q3 earnings report:

Subsequent to the end of the quarter, CyrusOne leased up 100 percent of the second expansion phase at the Chicago - Aurora I facility.

Wojtaszek confirmed the CME Aurora II expansion was already underway on 15 acres acquired as part of the $130 million deal earlier this year. This massive data center expansion is expected to be up and running by Q2 2017, according to Wojtaszek.

One challenge facing the publicly traded data center REIT during the second half of 2016 will be tough comparisons going forward, due to record leasing reported over the past year. Investors and analysts are trying to understand if the success of the past few quarters is the "new normal," or if the enormous wave of cloud service provider deployments will begin to taper.

One concern voiced by a few industry insiders after CyrusOne announced record leasing for Q2 2016, was the question of "giving away the business," in order to sign this barrage of large cloud deals.

Wojtaszek addressed this "innuendo" head-on in the presentation slide deck. He made it clear during the earnings call that the recently completed 30 MW Sterling II build-to-suit was developed at a 16 percent ROIC. 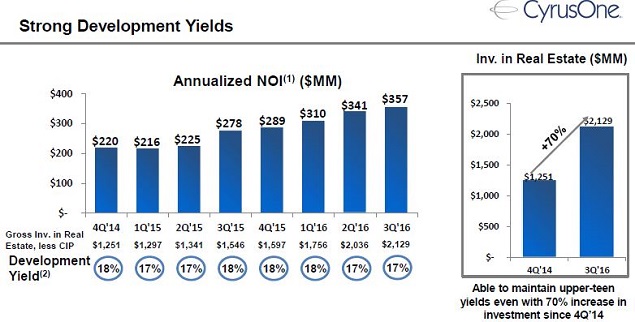 This is consistent with CyrusOne's stated targeted range of 16-19 percent, and significantly higher than the 10-13 percent range reported by some publicly traded peers for wholesale deals.

During the quarter, CyrusOne acquired 29 acres of land in Phoenix and 23 acres of land outside of Chicago to support growth in those markets. CyrusOne also has an option to acquire 46 acres in the Pacific Northwest; plus land and shell for development of a fully pre-leased data center in Northern Virginia.

In the US, CyrusOne is looking at West Coast markets, and is actively trying to acquire a Santa Clara site in order to target technology firms. Nevada was also raised as an expansion possibility. Additionally, CyrusOne is looking to plant the flag in Southeast, with Atlanta and Florida mentioned as markets of interest.

Wojtaszek also acknowledged that CyrusOne will have to expand internationally in order to better serve its core Fortune 1000 customer base. In fact, CyrusOne wrote off expenses in Q3 related to M&A talks that did not bear fruit. It was unclear if those aborted acquisition attempts were domestic or global.

CyrusOne continues to voice one of the strongest cases for the continued growth of data center outsourcing and enterprise cloud migration.

CEO Wojtaszek explained that the hyperscale cloud providers which are disrupting the IT world have much better uses for their capital than owning expensive data center assets. He emphasized that CyrusOne has now proven to its existing enterprise and cloud customers that it can build data centers faster and cheaper.

It appears another strong quarter of leasing and operating results, a boost in full year guidance, and a growing pipeline of prospects, were the proverbial "treats" which turned around a scary Halloween morning for shareholders.