CenturyLink’s plan to acquire Level 3 Communications in a blockbuster $34 billion deal that if closed will shake up the enterprise telecommunications market will not have a substantial impact on CenturyLink’s ongoing review of its data center strategy, which may result in a sale of some or all of the company’s data center assets, CenturyLink CEO said in a call with analysts Monday.

The Monroe, Louisiana-based telco’s biggest business is providing wireline phone and internet services to businesses and consumers around the US, but it also operates a global network of data centers, where it provides everything from colocation to cloud and managed services. As wireline revenues declined and as the cloud and colocation markets became increasingly competitive, dominated respectively by the likes of Amazon and Equinix, CenturyLink’s management last year kicked off a strategic review of its data center assets, explaining it by a desire to reduce the amount of capital investment the segment demands.

The data center strategy review continues, and “we expect to successfully complete our process … during the fourth quarter,” Glen Post, CenturyLink CEO, said on the call dedicated to the Level 3 deal.

While Level 3 has many data centers around the world – 350, according to its website – they are primarily focused on providing colocation services for network operators, and most of them are not comparable to CenturyLink’s colocation facilities, Post said. 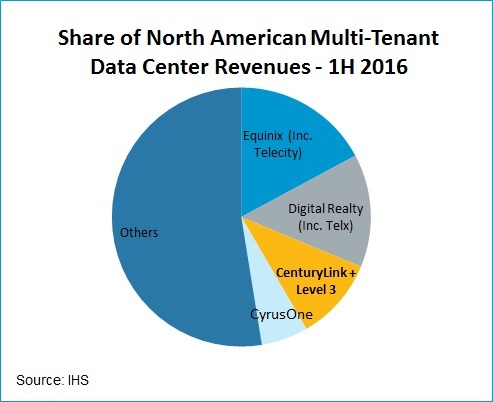 CenturyLink’s current data center operation started taking shape when the company acquired Savvis in 2011, dishing out $2.5 billion for the data center provider. It has been expanding its data center portfolio ever since, including after the announcement of the strategic review.

The company doesn’t own much of the real estate that houses its colocation data centers, leasing space from data center landlords, primarily from Digital Realty Trust, which lists CenturyLink as its second-biggest tenant by annualized rent. The telco has about 2.3 million square feet across 51 locations under contract with Digital, which is also reportedly a major hurdle in the process of divestment of its data center assets.

Last month, CenturyLink announced it was looking to cut 8 percent of its workforce, which amounts to about 3,400 people.