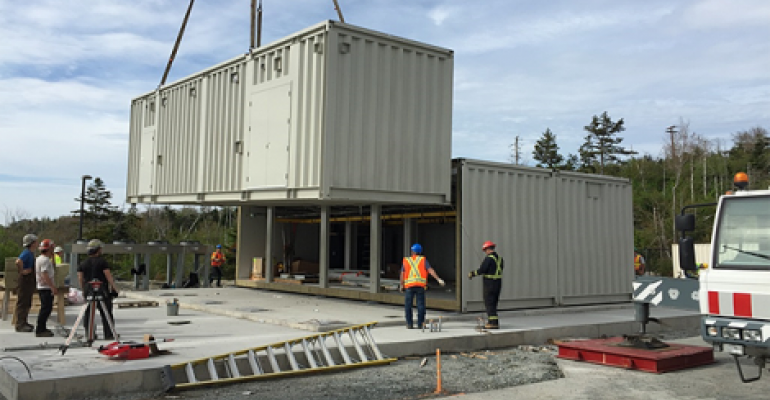 Building entire data centers for customers will be a major focus

Executives at Emerson Network Power, the business unit Emerson Electric has agreed to sell to a group of investors led by a private equity firm, expect the unit to have more freedom to pursue longer-term plays, such as building entire data centers for customers, once the acquisition is closed.

“We feel as though we’re going to have an opportunity to be more nimble, to be more responsive than we might’ve been in the past, and to take on newer opportunities that might be neutral in the short term but very positive in the long term,” Peter Panfil, VP global power at Emerson Network Power, said in an interview with Data Center Knowledge on the sidelines of Data Center World in New Orleans this week.

Scott Barbour, executive VP of the soon-to-be private Emerson, is “very bullish on the acquisition,” Panfil said. “In many cases, companies sometimes decide against their best interests in the long term in order to make sure that the short-term returns make people happy.”

Emerson Electric announced in August an agreement to sell the unit to Platinum Equity and other investors for $4 billion. The companies expect to close the acquisition by the end of this year. Emerson said it would get rid of underperforming businesses last year, after a period of weak earnings growth.

Without the pressure to deliver immediate results, Emerson Network Power will be in a better position to pursue data center projects with a wider scope. Even five years ago, it did not have the capability it has today to build entire data centers for customers from the ground up. Over the past few years, it has done so for Facebook in Sweden, for the telco nbn in Australia, and built dozens of submarine cable landing stations around the world. There is opportunity to do more, which will be a major focus once the spinoff is complete.

While it hasn’t been impossible to pursue such projects in the past, it has been more difficult as a unit of a manufacturing company. Agreeing to build an entire data center means taking on responsibility manufacturers don’t normally accept, Panfil explained. “A manufacturer for the most part wants to build equipment and ship it.”

Builds like the one Emerson did for Facebook in Lulea, Sweden, don’t diverge too much from that inclination. Dubbed Rapid Deployment Data Center, it was built primarily using components manufactured in factories, including components of the building structure itself, and shipped on site for assembly.

On most data center projects, however, Emerson’s involvement has been limited to supplying electrical and mechanical infrastructure components, supporting consulting and specifying engineers, construction managers, and commissioning teams. “We had all the pieces except the implementation piece,” Panfil said.

The soon-to-be-independent company wants to become more of a full-solution provider, which is what companies increasingly prefer to piecing together complex data center projects one contract at a time.

Panfil likes to draw a parallel between this evolution and the evolution of the way we get bread. “We used to grow wheat and grind the flour and bake the bread,” he said. “Now we buy the bread, but tomorrow what you’d like to do is … buy the entire sandwich.”