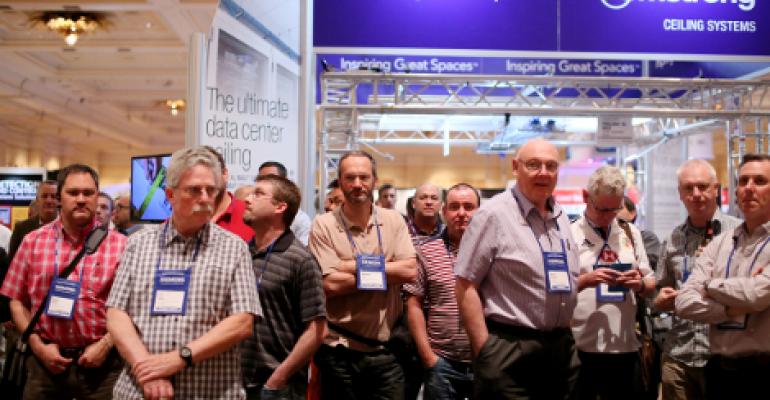 The Data Center Industry Has a Problem: Too Many Men

Of all sectors, the data center sector should be particularly interested in broadening its labor pool.

Every time Lisa Huff attends a session at a technical conference, she scans the room to see how many women there are in the audience. Tuesday morning, during the keynote at Data Center World, there were nine, including herself and her partner.

The huge gender gap in the tech sector overall is not a secret, but in the subsector we refer to as “the data center industry” the issue is more acute than in most of its other corners. And nowhere does the gap reveal itself more than at data center conferences, where hallways and presentation rooms are flooded with middle to late middle age white men.

At Data Center World, taking place this week in New Orleans, Huff, principal analyst at Discerning Analytics, sat on a panel that explored the reasons behind this issue and the ways it could be addressed. She has an engineering degree and, having spent her entire career in technical roles, she is used to being the only woman in the room.

Things aren’t any different in her current role as an analyst. “I can’t even recall a woman data center manager that we deal with – out of hundreds,” she said.

While a Salesforce or a Facebook may feel safe in knowing that there are hordes of college graduates with computer science degrees eager to start plugging away at the keyboards in their offices at a moment’s notice, there’s no guarantee that the pool of qualified workers companies that design, build, and operate data centers can draw from won’t shrink in the near future.

It’s hard to argue that the data center workforce is sustainable when the average data center manager is a male in his 50s. “In the not-too-distant future, you’re going to lose a whole swath of your workforce,” said Dr. Theresa Simpkin, head of department, Lord Ashcroft International Business School, Anglia Ruskin University.

The latter project actually started as a project focused on the data center industry, but she quickly realized that there weren’t enough women to interview for it. “I had to broaden it out to women in STEM, because I couldn’t find anybody to talk to who was a woman [working] in data centers,” she said in an interview with Data Center Knowledge. “I just can’t find a route to them. That in itself is telling.”

Impostor syndrome is a psychology concept. The term describes the fear some successful people have of being outed as unqualified for the roles they have been successful in.

While her study is still in progress and she doesn’t know exactly how common the phenomenon is among women in STEM occupations, it isn’t uncommon, Simpkin said. Many women she’s talked to so far feel like “they’re waiting for the tap on the shoulder, saying, ‘Actually, we’ve made a mistake. You aren’t supposed to have gotten the job; it was meant to be somebody else,’” she said.

Of course, there isn’t a simple solution to the gender gap in the sector.

Children start divesting career options very early on – as early as three or four years old, according to Simpkin – using signals they receive from the culture that surrounds them. And the signals girls receive about their career options are different from the ones received by boys.

One part of the solution would be to “start stripping away these ideas that occupations have a gender bend,” she said.

Those early signals are crucial. Huff said she was encouraged by her parents to get into a technical field, but encouragement from parents isn’t enough. In fact, it often matters less than influence outside one’s home. Teachers and counselors in primary and grade school can have a much bigger impact on a person's career path.

Jennifer Cooke, research director, Data Center Trends and Strategies Group, IDC, who was also on the panel, said somebody simply pointing out what she was good at when she was in college is one of the reasons she is where she is today.

And this response needs to happen soon, because the gender gap isn’t simply a matter of gender. There is a business case for having a more balanced workforce. A lot of research has shown that a more diverse workforce is more innovative, Simpkin said.

This, coupled with the average age of a data center manager, makes for a compelling argument for greater diversity. “The time is ripe for those sorts of conversations to get really pointed, because the sector is maturing,” she said. “The impending exodus of those 55-year-old managers leaving the sector means that there’s going to be a bit of a vacuum, unless there’s a concerted and strategic response.”

Help Dr. Simpkin advance her research by participating in her studies:

Impostor Phenomenon and women in STEM