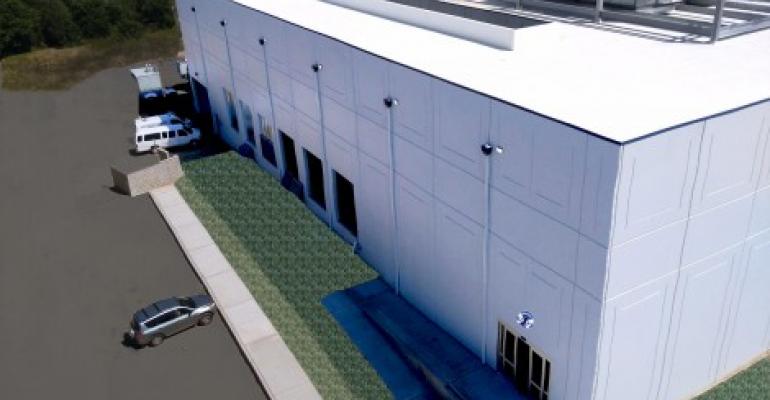 Rendering of the exterior of the NJFX data center in Manasquan, New Jersey (Image: NJFX)
Business

If you want traffic from your data center to reach Europe, you have to get it to one of the submarine cable landing stations along North America’s east coast. There is a couple in Canada, but most of them are in the US, with the highest concentrations in the New York metro and at the southern tip of Florida. Most submarine cable routes to Europe land in the New York metro, while Florida is the primary gateway to Central and South Americas.

Getting your traffic to one of the landing stations in New York or New Jersey isn’t simple. If you’re a bank, for example, it isn’t just a matter of signing a contract with one of the cable operators and getting your technicians to light up a fiber line between your data center and a landing station. You have to go through middlemen, companies that will backhaul your traffic to an access point somewhere in a colocation data center – which can be close to or far from shore – and then to the landing station itself.

If your data center is in Ashburn, Chicago, or Denver, and you want to move traffic to Europe or South America via a landing station in New Jersey, you would normally have to backhaul it first to one of the big carrier hotels in Manhattan – Google-owned 111 8th Avenue, Digital Realty’s 60 Hudson Street, or 32 Avenue of the Americas (which was actually at one time the main AT&T building for transatlantic connectivity) – from where telcos who are members of consortia that operate submarine cables would take it to the New Jersey landing station.

But the company behind a new data center launched recently on the New Jersey coast says your traffic no longer has to take that detour. New Jersey Fiber Exchange has built what its founder, Gil Santaliz, describes as a data center campus around a landing station in Manasquan, a borough in the Garden State’s Monmouth County, where four submarine cables land now and one more is expected to come online next year.

The landing station is owned by Tata Communications, and the NJFX data center provides direct connectivity to submarine cables that land there. It is unique in that it is adjacent to the landing-station facility, which is closed to everyone other than the cable operators, as all cable landing stations usually are, according to Santaliz.

The NJFX founder has been deeply involved in the region’s connectivity market for years. He was a founder of 4Connections, a provider of dark fiber in New Jersey acquired by Cablevision subsidiary Optimum Lightpath in 2008. Prior to that he was general manager for a joint venture between GPU Telecom and Telergy, which leased fiber in the Mid-Atlantic region.

Although there are carrier hotels in New Jersey -- the biggest one being at 165 Halsey Street in Newark, where you can access at least one of the submarine cables that land in Manasquan, called Apollo -- according to Santaliz, the bulk of transatlantic traffic travels through the legacy network hubs in New York City.

This model, he says, was devised before September 11 and before Hurricane Sandy. Both disasters took out significant portions of telecommunications infrastructure in Manhattan, and having an alternative route makes New York less of a choke point.

When he was running 4Connections, all banks he talked to wanted direct access to landing stations, but operators wouldn’t let them, he recalls. And that demand is still there today. “They don’t want to depend on backhaul that’s unpredictable.”

The new cable that’s due to go live next year, called Seabras-1, will connect New Jersey to Praia Grande, Brazil. Banking is one sector “that’s extremely interested in that Brazilian piece, as well as European direct access,” Santaliz says.

Content providers are also interested and of course carriers. These are the three big verticals NJFX is catering to. When the company launched a meet-me room at the site, it inherited 11 carriers that were already connecting to the landing station. Three more carriers came on board since.

Previously, the meet-me room had been limited to carriers only, but now that the official data center launch date is near (September 21), it is open to enterprises, such as banks and content providers. Carriers that are already there are making new deals every day, Santaliz says. “The amount of traffic in that facility is staggering.”