What is the Data Center Cost of 1kW of IT Capacity?

Data center size clearly matters, and now we know how much

It’s no secret that bigger data centers benefit from economies of scale. It costs less to provide X amount of data center capacity in a massive warehouse-scale facility than it does in a small data center.

The number of factors influencing total data center cost is almost countless, but that economies of scale are real is generally accepted as a fact. However, little data has been available publicly on exactly how much of a difference those economies of scale can make. A recent study by the Ponemon Institute, funded by Emerson Network Power, aims to quantify this difference.

And, as it turns out, the difference is huge. Even if you compare a data center that is 500 to 5,000 square feet in size to one that is between 5,001 and 10,000 square feet, it costs as much as 64 percent less on average to provide 1kW of IT capacity in the larger facility, the researchers found.

See also: How Server Power Supplies are Wasting Your Money

The researchers drew their conclusions by analyzing data from a survey of annual costs for 41 data centers in North America, including amortized plant, amortized IT assets, operating costs, and energy.

That 64 percent drop in data center costs when comparing the two smallest size tiers used in the study is the largest. As you go up in size, the cost differences between neighboring tiers shrink but nevertheless remain substantial: 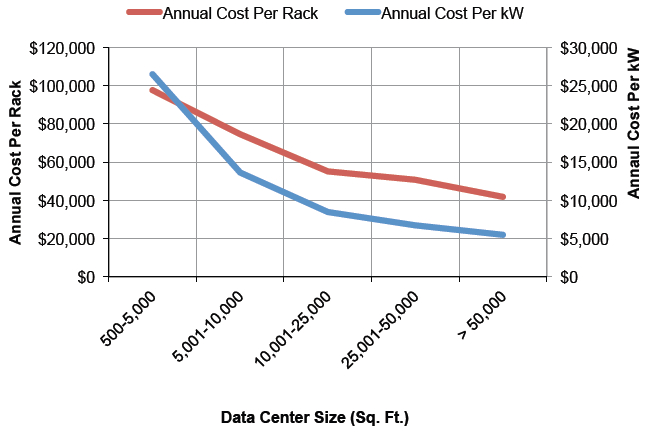 Economies of scale make a difference in all four cost categories the study examined (plant, IT, operating, energy), but the impact is greatest in two of the biggest elements of total data center cost: operating and energy, which together constitute about 80 percent of the total.

See also: Getting to the True Data Center Cost

Energy cost to support 1kW of IT load in the smallest data center was 180 percent higher than in the largest data center analyzed. The difference in operating costs was 129 percent.

Download the report on the study in full here