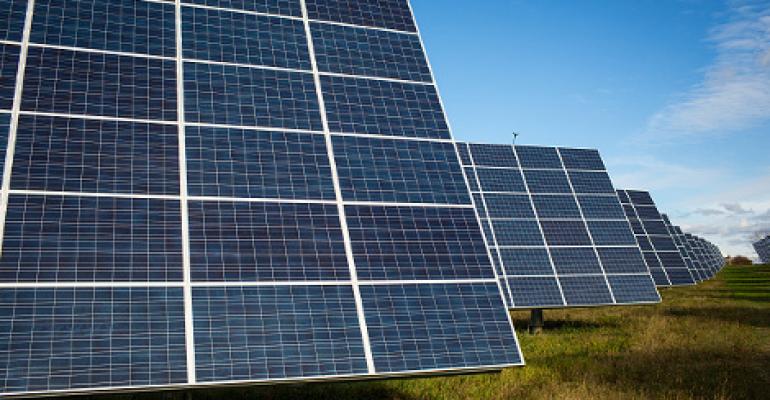 How Renewable Energy is Changing the Data Center Market

The big recent renewable energy push in the US by some of the largest data center providers can be attributed in no small part to rising interest in the market in colocation services powered by clean energy. While good publicity and the promise of energy cost savings sometime down the line are good enough reasons for a company like Google to commit tens of millions of dollars to renewable energy purchase contracts for its data centers, companies that provide various data center services to many users are working with a very different set of considerations. It just has to make business sense for them.

The good news is that renewable energy for data center services does make more business sense today than it ever has, and that’s for two reasons.

The first reason is that more and more of their customers have sustainability goals of their own, and customers that recognize data centers as a substantial part of their operation will look more favorably at a data center outsourcer that can offer them a renewable option.

A recent survey of consumers of retail colocation and wholesale data center services by Data Center Knowledge, found that 70 percent of these users consider sustainability issues when selecting data center providers. About one-third of the ones that do said it was very important that their data center providers power their facilities with renewable energy, and 15 percent said it was critical.

Most respondents said their interest in data centers powered by renewable energy would increase over the next five years. More than 60 percent have an official sustainability policy, while 25 percent are considering developing one within the next 18 months.

Download results of the Data Center Knowledge survey in full:Renewable Energy and Data Center Services in 2016

The second reason is cost. At least on the wholesale markets, renewable energy has become price-competitive with fossil-fuel energy, and data center providers who are able to buy it on the wholesale market don’t necessarily have to pay much of a premium for it. Moreover, data center operators often secure long-term power purchase agreements (PPAs) with wind or solar plant developers at rates that are locked in for the duration of the contracts, protecting themselves from energy market volatility for many years.

Akamai Technologies, operator of the world’s largest content delivery networks, is a good example of a major global customer of data center services that is now actively trying to figure out how to clean up the energy supply of its network, which spans many colocation data centers across close to 130 countries.

Hedging against price volatility with renewable PPAs wasn’t much of an argument in Akamai’s case. While its network consists of about 200,000 servers, it is extremely distributed, most sites housing only a minimal footprint, she explained. Paying to most of its data center providers based on power capacity and not the amount of energy it uses, Akamai isn’t as exposed to energy price swings as some of the bigger energy users are.

Enter customer demand. “We saw a rising percentage of our customers and also investor interest” in using services powered by renewable energy, Peill-Moelter said. Customers wanted Akamai to help them meet their own renewable energy goals, and the company decided to stay ahead of the competition and make renewable energy a feature of its services and a differentiator, which is a goal that’s much easier for management to sign off on, she said.

This past May, Akamai announced a change in strategy, setting for itself the goal of powering at least half of its infrastructure by renewable energy in four years.

Four years may seem like a long time, but considering that renewable energy as a feasible product isn’t available from most utilities, let alone from most data center providers, four years isn’t long at all. Google spent years pushing Duke Energy, the largest utility in the US, to add a clean energy product to its portfolio and create a special tariff for it so that the internet giant could claim it is using renewable energy to power its data centers in North Carolina.

When Switch, the Las Vegas-based provider that operates one of the world’s largest data center campuses, found a developer that would build a large solar farm in Nevada and sell it energy to power its data centers at a low-enough rate, state regulators blocked it from “unbundling” itself from the big Nevada utility NV Energy, instead forcing an agreement where NV Energy would buy clean energy from the developer at the low rate and resell it to Switch at a much higher one. In July, Switch filed a lawsuit against both the state and the utility, claiming the agreement is unfair.

Because any company cannot simply go and buy or sell renewable energy on wholesale markets in any state, Google and Apple registered subsidiaries as energy companies so that they could have that flexibility.

Securing enough renewable energy for any substantial data center operation seems to almost always entail a drawn-out and expensive process of negotiating with utilities and regulators and devising complex work-arounds.

“I don’t think it’s an easy thing for [data center providers] to do,” Peill-Moelter said, but they have more of an incentive to figure it out “because their customers are pushing them to do it.” Her hope is that more providers will see renewables as a way to reduce exposure to price volatility of fossil-fuel energy, but that strategy will only work if data center providers don’t pass the cost of power to their clients (many of them do).

Not All RECs are Created Equal

Adding to the complexity is the many different ways for a data center operator to source Renewable Energy Credits. Some types are acceptable for customers like Akamai, and some aren’t. Google, for example, may buy energy from a wind farm, strip it of RECs and sell it as “dirty” energy on the wholesale market, while applying the RECs to dirty energy its data centers consume. The end result is still more renewable generation capacity added to the grid, since big long-term PPAs of the kind Google signs often help developers secure the financing necessary to build their renewable generation plants.

You can also simply buy RECs on the market, which does little in terms of reducing overall reliance on fossil fuels. “If they’re going off and just buying national RECs, that doesn’t do us any good,” Peill-Moelter said. And other big colocation customers, such as eBay and Salesforce, are on the same page with Akamai about this, she added.

She is involved in an effort to bring some standardization to the way colocation providers offer renewable energy-powered services called Future of Internet Power –one of the projects by an NGO called Businesses for Social Responsibility. The group is hoping to have a proposal drafted by the end of summer.

They Just Want to Pay for What They Use

In addition to the lack of regulatory and business frameworks for large-scale renewable energy purchases by big end users like data center operators, there are many internal problems at colocation companies that make it even more difficult for their customers to have strict control of the type and amount of energy they use in their facilities.

As an energy-conscious customer, you need to have good data on how much energy you are using in a colocation facility, but there are many older colocation data centers that aren’t instrumented enough to provide that data, Peill-Moelter said. It is a common practice in the colocation industry to charge customers based on power capacity they use (cost per kW) rather than the amount of energy they use (cost per kW-hour).

This problem isn’t limited to small mom-and-pop colos. “Pretty much every big colo provider does have data centers that can’t measure energy,” she said. Akamai has started pushing for metered-power colo contracts, but many providers just couldn’t offer that model. “They’re not eager to do that, but that’s changing; colos are getting the message.”