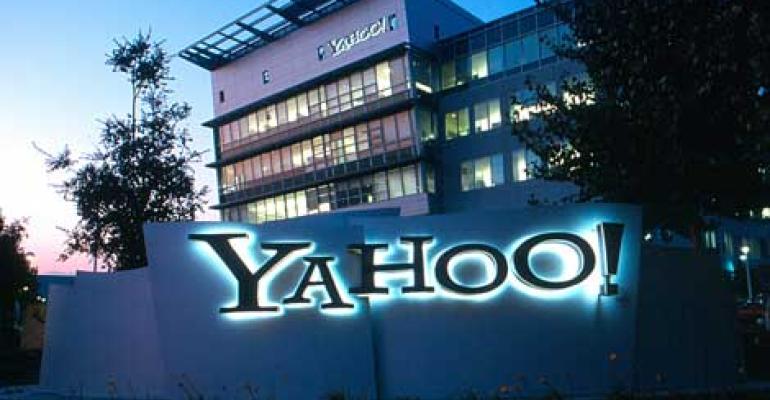 Verizon Communications Inc. agreed to buy Yahoo! Inc.’s web assets for $4.83 billion, ending the company’s two-decade run as an independent business that took it from Stanford University startup at the dawn of the internet age to also-ran behind nimbler online rivals such as Google and Facebook Inc.

Verizon will pay cash in a deal that includes Yahoo real estate, but excludes some intellectual property, which will be sold separately. Yahoo will be left with its stakes in Alibaba Group Holding Ltd. and Yahoo Japan Corp., with a combined market value of about $40 billion. The telecommunications company will add Yahoo web services that still draw 1 billion monthly users, including mail, news and sports content and financial tools, gaining share in the $187 billion digital-advertising market -- though it will nevertheless be a distant third behind Google and Facebook. Verizon, the largest U.S. wireless carrier, also gets smaller but faster-growing assets including mobile applications and advertising technology for video and handheld devices.

“We have enormous respect for what Yahoo has accomplished: this transaction is about unleashing Yahoo’s full potential, building upon our collective synergies, and strengthening and accelerating that growth,” AOL Inc. Chief Executive Officer Tim Armstrong said Monday in a statement. “Combining Verizon, AOL and Yahoo will create a new powerful competitive rival in mobile media, and an open, scaled alternative offering for advertisers and publishers.”

The deal amounts to an admission that Yahoo has lost much of its relevance as modern internet use shifts toward mobile, social networking and messaging. The "portal," officially formed in 1995 by Stanford students Jerry Yang and David Filo, was once indispensable, serving as the on-ramp to the online world for millions of consumers just discovering the internet. Yahoo’s decline, which began with the rise of Google as the preferred search engine for web surfers and advertisers, was hastened in the past decade by management missteps and a failure to keep up with users’ changing habits.

With annual sales forecast to drop to their lowest in more than a decade, an abandoned plan to spin off Yahoo’s valuable Asian assets, and rising pressure from investors, Yahoo CEO Marissa Mayer had no choice but to put the company’s core up for sale earlier this year. Now, Verizon must find a way to turn around a business that, even after strategy shifts and job cuts, remains bloated with costs and held back by a fragmented product lineup.

The deal also ends the turnaround efforts of Mayer, whose appointment in 2012 was lauded by Wall Street and Silicon Valley. Mayer, Google’s No. 20 employee and its first female engineer, was hailed as a potential savior for a foundering company in management disarray. This wunderkind, who gained renown for tending Google’s spartan home page, applied her engineering chops to building new products and restoring Yahoo’s long-lost technological prowess. Yet her four-year effort -- including spending billions of dollars on acquisitions and developing and updating mobile apps -- did little to win a new generation of users, attract more advertising dollars or fend off competition from Google in search and Facebook in social media. Mayer said Monday she would remain at the company.

“I’m planning to stay,” Mayer said in a post on the company’s website. “It’s important to me to see Yahoo into its next chapter.”

Yahoo will be integrated with Verizon’s AOL under Marni Walden, executive vice president of the product innovation and new businesses organization at Verizon. Walden said she and Armstrong planned to meet with Mayer this week.

“Marissa will be very key to successful integration,” Walden said in an interview on Bloomberg Television. “It’s premature to talk about who will be in what roles” longer term, she said.

The shares of Sunnyvale, California-based Yahoo were little changed in early trading Monday at $39.11.

Yahoo will change its name when the deal closes, hanging onto its cash, patents and stakes in Alibaba and Yahoo Japan, with a combined market value of about $40 billion. The company said it will return cash to shareholders and update investors on plans for the other assets later.

In the late 1990s, Yahoo was the site where many people learned how to navigate the World Wide Web by serving up links from a handy search box and aggregating news and other content from disparate sources. The company went public in 1996 at $13 a share, part of a wave of Internet IPOs that included Netscape Communications Corp., Excite Inc. and Lycos Inc. Its stock more than doubled in its first day of trading, buoyed by optimism that the internet would someday become a meaningful advertising medium.

As the web expanded to become a central way people communicate and do business in the new century, traversing its breadth became more difficult, and Yahoo sought to fold in more products and features. That gave an opening to another Stanford company, algorithm-based web-query startup Google, which brought fresh thinking to search and a focus on technology that could scale with the internet’s expansion -- and make money by more precisely targeting advertising based on users’ searches. Consumers soon began to shift to Google, and by 2005 it surpassed Yahoo in overall sales.

“It lasted a whole hell of a lot longer than I thought it would," said Paul Saffo, who teaches forecasting at Stanford, noting that Yahoo was also held back by poor leadership over the years. "It made some right moves, but it could never get ahead of the curve."

An acquisition of Yahoo could have happened sooner. The most high-profile bid came in 2008 when it failed to consummate a potential purchase by Microsoft Corp. The software giant offered more than $45 billion for Yahoo, but then-CEO Yang eventually rebuffed the deal as too cheap. Today, the company is worth less than $38 billion, including its valuable Asian assets.

The latest takeover talks began earlier this year when Mayer -- after keeping investors at bay for years -- said the company would explore strategic alternatives, including selling its main internet operations. Mayer was finally bowing to rising shareholder ire that gained steam after the collapse of a plan to spin off Yahoo’s stake in Alibaba in a way that would minimize tax for investors. Alibaba, the largest e-commerce provider in China, had emerged as the most valuable piece of Yahoo, and investors wanted a way to realize some of those gains. After U.S. regulators failed to give prior approval for the transaction’s tax status, Yahoo jettisoned the plan.

Activist investor Starboard Value LP, a longtime Yahoo critic, stepped up its campaign to pressure Mayer to act, including threatening to oust the board through a proxy battle. In April, Yahoo struck an agreement with Starboard by naming several new directors, including Jeffrey Smith, Starboard’s CEO. As part of the deal, Smith joined the strategic review committee.

AT&T Inc. and Quicken Loans Inc. founder Dan Gilbert were also active in the bidding process, each vying to win Yahoo’s core Internet business, as well as some of its intellectual property and real estate assets.

At the time, the multiple offers valued Yahoo’s web businesses from about $4 billion to $6 billion, except for Verizon, a person familiar with the matter said. Verizon’s bid was lower -- from $3.75 billion to $4 billion -- because it didn’t include Yahoo’s patents and real estate.

Early in her tenure at Yahoo, Mayer focused on hiring and product development to add user traffic and generate more revenue. She expanded online news with big-name hires such as Katie Couric, made several large acquisitions to round out the company’s advertising and video services, and pushed for a shift to mobile.

Her efforts never translated to a financial revival. In the first quarter of 2016, Yahoo sales fell 18 percent to $859.4 million, even as rivals such as Google parent Alphabet Inc. and Facebook posted respective revenue gains of 18 percent and 52 percent. Yahoo is projected to grab just 1.5 percent of the global digital ad market this year, down from 2.1 percent in 2015, according to EMarketer. Google is forecast to command 30.9 percent. Facebook’s slice will grow to 12 percent, the researcher said.

Though Mayer expressed confidence in the turnaround plan as recently as this year, she said such efforts sometimes take five to seven years. Investors weren’t that patient.

“It’s just so unfortunate that it’s kind of ending in a fire sale," said Shar VanBoskirk, an analyst at Forrester Research. “It was such a foundational piece of the current economy.