After Britain's shocking vote, savvy investors have chosen to "vote" with their dollars, driving up the price of most US REITs, including data centers

Brexit has already had many unintended consequences, most notably, a record devaluation of the British pound and a lower Euro valuation versus the US dollar. There has also been a downward spike in interest rates for sovereign debt. The rate of interest for US 10-Year Treasury Notes is ~1.37 percent as of this writing, flirting with an all-time low.

Here is why this fact is crucially important for data center REIT investors.

The conventional wisdom is that most REITs are viewed as being "bond-like" because of the legal requirement to pay at least 90 percent of taxable income to shareholders as dividends. The recent plunge in interest rates means that both bond and REIT investors are willing to accept lower dividend yields.

Since bond prices move in the opposite direction of yield, this has the effect of driving up the price of US REIT shares. 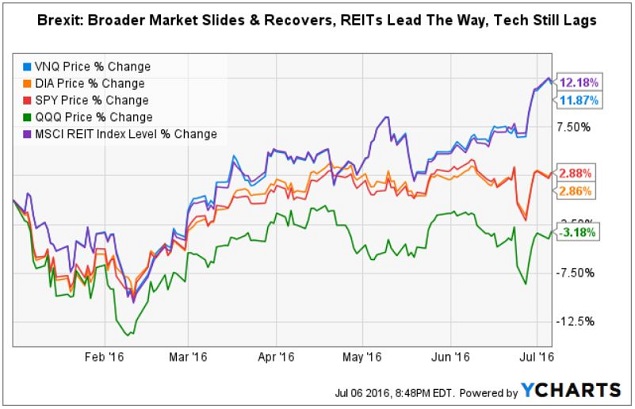 Notably, data centers have been the top performing REIT sector, already up an average of ~50 percent during the first six months of 2016. This is great news if you already own data center REIT shares, and disappointing news if you were waiting for shares to pull back from record high prices prior to initiating or adding to a position.

Equinix, the world's biggest data center REIT, now derives just over half of its revenue from international markets, with substantial operations in the UK and throughout Europe, which became much more substantial early this year, when the company closed its blockbuster $3.8 billion acquisition of the London-based European data center giant TelecityGroup. The deal made Redwood City, California-based Equinix the biggest data center provider in Europe.

Equinix was the only data center REIT that initially exhibited weakness, trading down 2.46 percent to close just under $378 per share on Friday, June 24th (the first trading day after the Brexit vote). 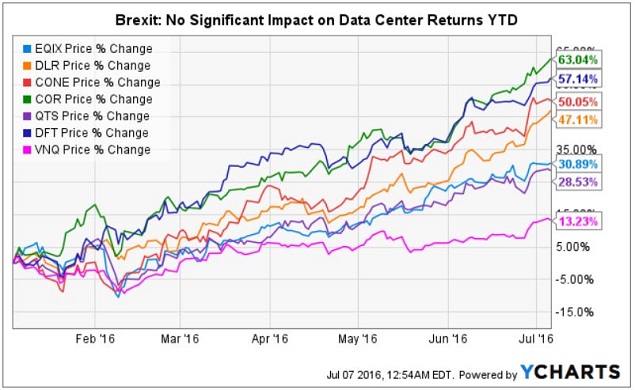 Fast forward a few days, and the entire data center REIT sector, including Equinix, was trading at 52-week highs on June 30, 2016.

This Tuesday, Goldman Sachs initiated Equinix at a Buy rating with a $435 price target, representing another 12 percent upside from the prior close. That same day, Equinix and Digital Realty finalized the sale of the eight data centers which the European Commission required Equinix to divest as part of the approval for the TelecityGroup acquisition.

Why is Mr. Market giving US data center REITs with significant European operations a free pass, despite the gloomy view regarding UK and European commercial real estate?

The fact remains that data center REITs are not levered to employment, GDP, and consumer confidence like offices, hotels, and shopping centers. 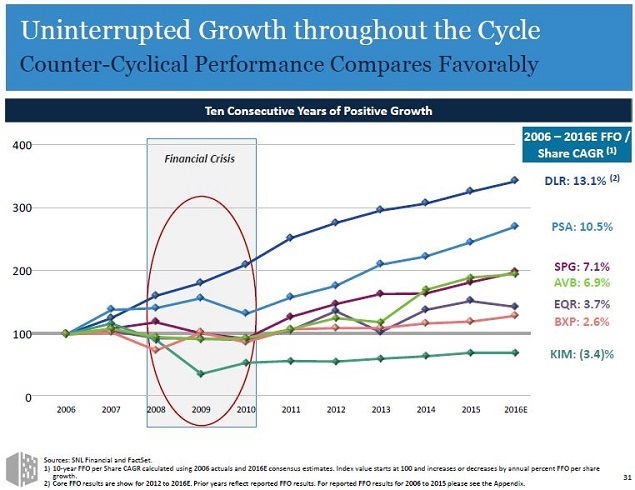 During the Great Recession, Digital Realty steadily grew its earnings and continued to raise its regular dividend distribution each year.

The exponential growth of global data and secular drivers, including cloud computing, Big Data, streaming media, wireless data, and the Internet of Things will continue to drive data center deployments.

Existing customers are not only sticky, they continue to expand and typically account for 50-80 percent of new lease signings every year for data center REITs.

The Brexit vote is an unprecedented event in history. It is still unclear how this drama will play out over time. However, investors currently fear that the European economies will slow down and that the UK will drift into a recession.

Data center REITs provide a cost-effective alternative for corporations to continue to operate and scale up IT operations in uncertain times.

Investors should keep calm and continue to hold onto their data center REIT shares.