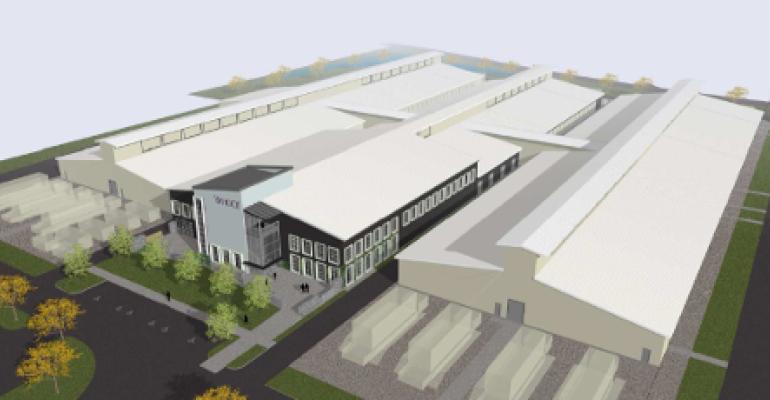 Yahoo garnered a lot of attention in 2009, when it announced the unusual design of a data center it was building in Lockport, New York. Shaped like a chicken coop, the facility would rely primarily on outside air for cooling, use a flywheel-based energy storage system, and have an annualized PUE (Power Usage Effectiveness) under 1.1, which was better than the average data center PUE Google was reporting at the time.

Now, the patents and patent applications describing the design of the Yahoo Computing Coop data center, also known as the Yahoo Chicken Coop, are for sale. The innovations are part of the trove of thousands of patents and applications the troubled internet giant is hoping to sell. Yahoo expects to make more than $1 billion from the sale, the Wall Street Journal reported, citing anonymous sources.

The trove of patents is only one of the assets Yahoo is selling as it continues to wrestle with shrinking revenue. It has been soliciting bids for many of its assets, including its core internet business, according to news reports, with Verizon Communications and AT&T reportedly being top contenders for its core assets.

Technologies described in the portfolio of intellectual property that’s being marketed are what the company considers “non-core,” a Yahoo spokesperson told Data Center Knowledge via email. “Yahoo is exploring the divestiture of a portfolio of more than 3,000 of our non-core patents and pending applications covering a wide range of technology, including early-filed internet search, advertising, and cloud technology.”

Also on the list are social networking, messaging, mobile, video, and data center cooling patents and patent applications, she said.

Yahoo plans to structure the potential transaction in a way that will allow it to continue using innovations in the portfolio, including its data center designs, by licensing them from the future buyer.

The Yahoo Computing Coop has been a key part of the company’s data center strategy in the US, and it plans to continue using it and iterating on it in the future.

“We'll continue to have access to the Chicken Coop design through our license-back and will look for opportunities to continue to leverage that incredibly efficient design going forward,” the spokesperson said. “Equally, we see value in sharing our data center cooling technology patents as part of the portfolio that we're divesting, so architectural design and construction firms can leverage that patented technology.”

Among inventors listed on the applications are Mozan Totani, Yahoo’s manager of infrastructure strategy and data center development, and Scott Noteboom, who led the company’s global data center operations when it kicked off the Computing Coop project. Noteboom, who left Yahoo in 2011 to lead Apple’s infrastructure strategy, now runs his own Internet of Things startup called LitBit.

The Computing Coop design maximizes use of outside air for cooling and supplements it with evaporative cooling when necessary instead of relying on power-hungry mechanical chillers. Cold air enters the building through louvers on one of the walls and fills a plenum, where it is brought to appropriate temperature and humidity.

The design reduces energy use further by omitting air handlers, relying instead on server fans and a minimal amount of facility fans to direct airflow through the servers and into a central “chimney,” through which warm air travels upward by natural convection into the penthouse that gives the building its chicken-coop look. Once at the top, the air is either absorbed for recirculation or pushed outside.

Yahoo has used the design to build data centers in Lockport and Quincy, Washington. The company also owns and operates data centers in La Vista, Nebraska (close to Omaha), and Singapore, using leased data center facilities in other places around the world.