Slow Waning of the Enterprise Data Center, in Numbers

While enterprise data centers aren’t going away completely any time soon, the amount of money companies are investing in these facilities and the IT gear they house is declining quickly. More and more workloads are moving to the cloud or into facilities operated by data center providers of various kinds, while corporate IT budgets, with a few exceptions, are flat or declining.

The latest data center industry survey by the Uptime Institute shows that the shift of enterprise IT workloads from corporate data centers to various versions of outsourced infrastructure is happening faster than previously expected. Survey data from previous years “suggested that the shift to cloud computing would be gradual for conservative enterprise IT organizations,” authors of the report on the latest survey wrote. “However, this year’s data indicate that those assumptions may be incorrect.”

About 1,000 data center operators and IT practitioners responded to the survey. They were split about equally between executives, IT management, and IT facilities staff.

Here are the key numbers from the Uptime Institute Data Center Industry Survey 2016:

71%: Estimated percentage of all IT assets currently sitting in enterprise data centers.

20%: Estimated percentage of all IT assets currently sitting in colocation data centers.

9%: Estimated percentage of all IT assets currently deployed in the cloud.

50%: Portion of enterprise IT budgets that have been either flat or shrinking over the last five years. Only about 10 percent have seen their budgets increase meaningfully, while the rest have seen modest increases.

55%: Portion of enterprise server footprints that have been either flat or shrinking over the last five years.

~50%: Portion of enterprise IT shops that said they were planning to cut spending on Hewlett Packard Enterprise and Dell equipment this year. HP Proliant and Dell PowerEdge are the two most critical server platforms in enterprise IT. Some of the spending will be redirected to converged hardware platforms. (451 Research, Uptime’s sister company)

30%: Portion of companies that said they would cut spending on HP Enterprise servers by more than 50% this year. (451 Research)

~50%: Percentage of senior executives who expect the majority of their IT workloads will be hosted in colocation data centers or in the cloud. Of them, 70 percent say this will happen over the next four years, and 23 percent say it will happen by next year. 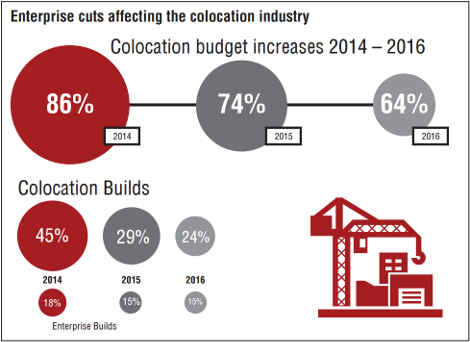 The numbers on builds are especially telling. These are based on responses to a question whether or not the company has built a new data center in the last 12 months.