The company predicts sales will rise at least 48 percent in the year ending March 2017 as it pushes into new markets and businesses beyond e-commerce. Part of that growth comes from Alibaba’s rapid deal-making: it spent about $18.7 billion on acquisitions and stock buybacks over the past year, including on e-commerce site Lazada Group.

Sales should rise more than 36 percent this year if revenue from Lazada and streaming video service Youku Tudou are excluded, CFO Maggie Wu told an investor conference Tuesday. That compares with 33 percent growth the previous year.

Analysts were expecting 40 percent revenue growth on average for fiscal 2017.

“Our core business together with our affiliates pretty much occupy all the building blocks of e-commerce in China. So it’s not just about the markets, it’s also the cloud computing business, the payments business, local services, digital entertainment, and search,” Wu told investors.

Alibaba’s cloud business is its fastest-growing, tripling revenue in the March quarter to more than 1 billion yuan. Like Amazon, the service emerged from the enormous computational power needed to handle millions of online shopping transactions. But unlike its US counterpart, it enjoys home-field advantage in a vast Chinese market where internet-based computing is still novel to many enterprises.

Its push into cloud, where software and services are provided to customers via server farms, prompted a second data center in Silicon Valley in October and preparation for its first in Europe.

The guidance reflects how Alibaba is moving into untapped rural markets, exploring business abroad and investing in new sources of income from online media to cloud computing. The company, which is trying to counter the impact of a slowing Chinese economy, bought Youku to expand into online video and Lazada to gain a foothold in Southeast Asia.

“A growth rate like this would be pretty fast given the base of their business,” said Li Yujie, an analyst at RHB Research Institute in Hong Kong.

Alibaba’s shares rose as much as 4 percent in New York.

Alibaba’s decision to release financial guidance comes after the US Securities Exchange Commission began looking into its accounting practices. The company is cooperating with the probe, which encompasses data reported from the company’s Singles’ Day promotion, Alibaba’s biggest shopping day, as well as how it consolidates results from affiliates such as logistics partner Cainiao. Alibaba had excluded Cainiao from its results to comply with GAAP accounting rules, Wu said Tuesday.

Chairman Jack Ma said in November that times would be tough in the following 15 months, that many companies would fail as China tried to re-balance its economy. 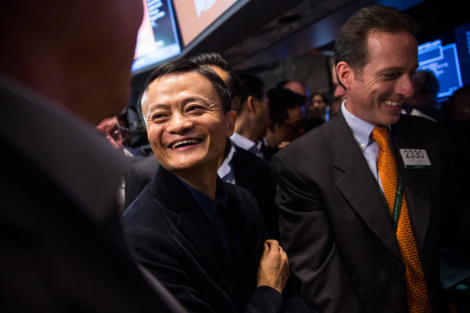 Ma, who’s said he wants more than half of revenue to come from outside China, told investors Tuesday that gross merchandise value -- or the sum total of its e-commerce transactions -- was no longer the best metric on which to gauge Alibaba’s performance. That’s because the web giant is branching out into areas like providing computing to enterprises and growing its advertising revenue.

Instead, the company will henceforth report results for individual segments such as mobile media and entertainment and cloud, Wu said.