The sale of eight European data centers to Digital Realty Trust wasn't an ideal scenario for Equinix, but the company was under deadline pressure, and Digital was both willing and able. As a result, Digital scored a deal that will put the growth of its new interconnection-focused retail colocation business on fast track in Europe.

Data centers are a capital-intensive business, and Digital's CEO William Stein emphasized that the strength and flexibility of the company's balance sheet is a huge advantage, speaking earlier this week at a JP Morgan conference. The Equinix deal was a demonstration of that advantage.

Last week, in conjunction with the $875 million acquisition of the eight-piece European portfolio consisting of Equinix and TelecityGroup data centers, Digital announced a $1.2 billion equity raise. According to Stein, "a clear use of funds opened a window," which then allowed for the sale of even more shares than required to fund the Equinix deal.

Digital is likely to have sold $525 million more in shares than it will need to fund the transaction. That figure takes into consideration about $200 million it will receive when Equinix acquires the Paris data center facilities it now leases from Digital, an option that was agreed to as part of the deal.

Equinix was under the gun to divest these data centers. It agreed to sell them as a condition for approval of its Telecity acquisition by European Commission regulators.

Back in January, Equinix CEO Steve Smith said there was considerable demand for the facilities, and he felt that “…they could be disposed of in a manner which would avoid creating a competitor.” Meanwhile, time was running out to sign a definitive deal with an eligible buyer, and Digital was a company Equinix knew could close the deal.

This was a huge win for Digital, which is looking to grow its interconnection and colocation business with the Telx portfolio it acquired last year at the core. The deal will significantly accelerate expansion of the Telx platform in Europe, where it hasn't been before. It can take many years to create interconnected customer ecosystems from scratch, and it's a completely different data center offering than wholesale, Digital's traditional bread and butter.

However, the deal further increases complexity of the relationship between Digital and Equinix, one of its biggest customers.

Stein was quick to point out during his presentation that Equinix remains a large client and partner. He described the Digital approach to the enterprise market as being "complimentary" and said the firms rarely compete directly for the same deal.

Equinix's Smith presented at the JPM conference the next day and acknowledged that he "never had a premonition that all the assets would go to one provider..." However, he said he felt comfortable being in "coopetition" with Digital, describing it as a rational allocator of capital and a quality organization to transition his employees to.

He also said he views the option for Equinix to purchase the Paris facility as the unique piece which finalized the deal.

What Digital is Getting

The Equinix and Telecity properties that Digital will be acquiring are "highly connected" hubs serving over 650 customers. 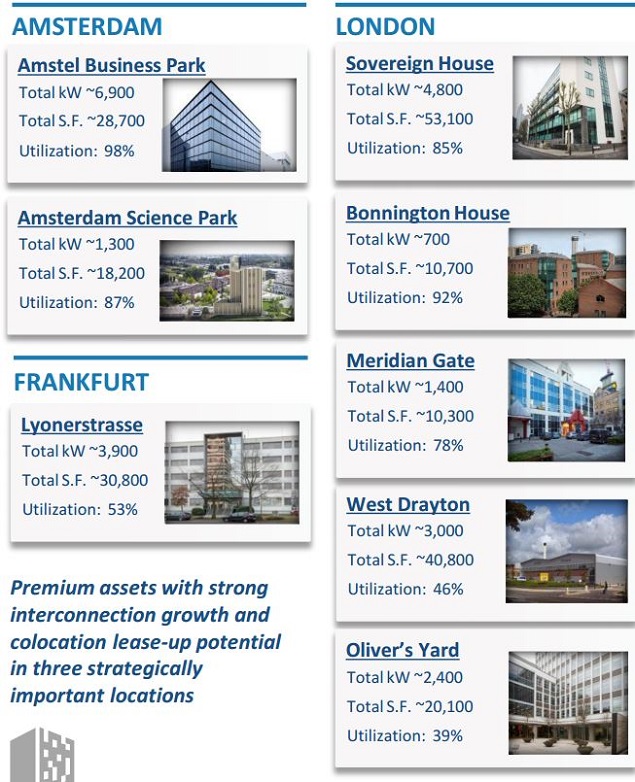 Equinix does not typically offer customers large footprint options, which presents an opportunity for Digital to cross-sell its wholesale "Scale" product offerings to customers in the European facilities it is buying.

The acquisition will be immediately accretive to earnings, even though the facilities only have 71 percent average utilization. This allows for a significant leasing upside. 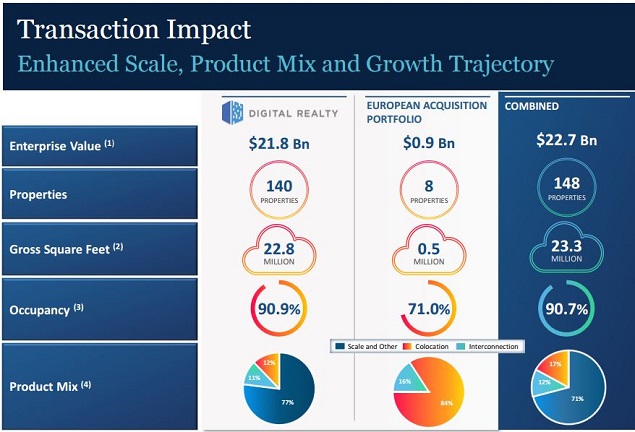 After the entire data center REIT sector had posted strong Q1 results, Digital's shares were trading at new highs, as bullish investors continued to bid up the sector.

This momentum allowed Digital to negotiate a $96 price for a forward sale of 13,225,000 shares (including the underwriter option). During the past 52 weeks, Digital shares traded from just below $60 to $98.49 per share. The last time Digital conducted an equity raise, its common shares were trading in the high $60s.

The company really pulled off a coup by structuring the equity raise as a "Forward Sale." This allows flexibility to take down the $1.2 billion in new shares incrementally, up until May 19, 2017. This locks in the price without the need to rush to deploy capital.

Digital's Equinix deal seems like a great way to get Telx up and running in Europe without taking any huge risks. This seems to fit Stein's vision of conservative growth with an eye on margins while growing cash available for distribution.

Digital already has phased expansions underway in Northern Virginia, Chicago, and Dallas. Stein mentioned that there will be additional expansions "not yet announced" in some US markets.

The $500 million of equity dry powder should also allow for a wholesale-focused acquisition, perhaps in one of the West Coast markets between Silicon Valley and Seattle. An opportunistic telecom data center portfolio might also make sense at the right price.

The bottom line is that after a period of austerity, Digital, the sole data center REIT with an investment-grade balance sheet, is once again flexing its muscles as the "800lb Gorilla" in the sector.