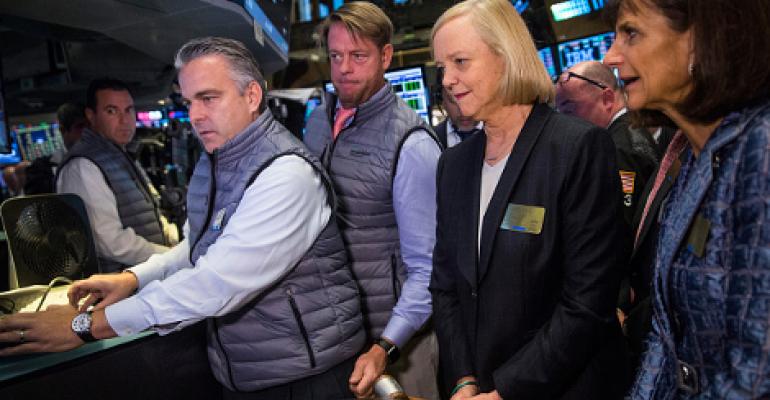 (Bloomberg) -- Hewlett Packard Enterprise will merge its technology-services division with Computer Sciences Corp., moving out of another shrinking business as it focuses on selling hardware and software to corporations.

The combination will be a stock-for-stock exchange with an expected value for shareholders of $8.5 billion, according to a statement Tuesday. CSC CEO Mike Lawrie will lead the new company. Shares of HPE, which also reported better-than-estimated second-quarter earnings, jumped 11 percent in extended trading, and CSC stock surged 23 percent.

HPE CEO Meg Whitman has been pushing to streamline her company by freeing it from sluggish businesses in tough industries. After shedding the personal-computer and printer business last year with the breakup of computing giant Hewlett-Packard Co., she’s now exiting the market for outsourced technology services and consulting. CSC, whose main business is services, will add HPE’s existing customers, and the deal is expected to generate $1 billion in cost savings in its first year, the companies said.

Whitman will have a seat on the new company’s board, which will be split evenly between directors nominated by each company, HPE said in a statement.

For HPE, the deal unwinds an expansion HP made in 2008, when the company purchased Electronic Data Systems for about $13 billion.

Separately, HPE said fiscal second-quarter profit excluding certain items was 42 cents a share, on revenue of $12.7 billion. Analysts on average had projected profit of 42 cents on sales of $12.3 billion, according to data compiled by Bloomberg. In the current period, which ends in July, profit will be 42 cents to 46 cents, the Palo Alto, California-based company said. That compares with an average estimate of 48 cents.