How Long Will the Cloud Data Center Land Grab Last?

US data center REITs reported record leasing for the year's first quarter, attributing their success primarily to a digital land grab by public cloud giants, who are racing to expand capacity.

The biggest data center providers are now operating in uncharted waters. The rising tide of public cloud deployments, combined with the paradigm shift in enterprise IT toward hybrid architectures, which combine cloud services with colocation, has created a perfect storm of demand for providers.

According to Equinix CEO Steve Smith on his Q1 earnings call, "Interconnection-oriented architectures represent a fundamental shift away from centralized, legacy enterprise IT models to distributed and dynamic models."

Demand for large data halls and connectivity to multiple clouds from one location has never been higher.

While a good problem to have, it presents a different set of challenges for data center providers moving forward: Will this trigger a building boom that will result in oversupply?

The unprecedented demand by the Big Three public cloud providers has changed the supply-demand dynamic in major US markets. 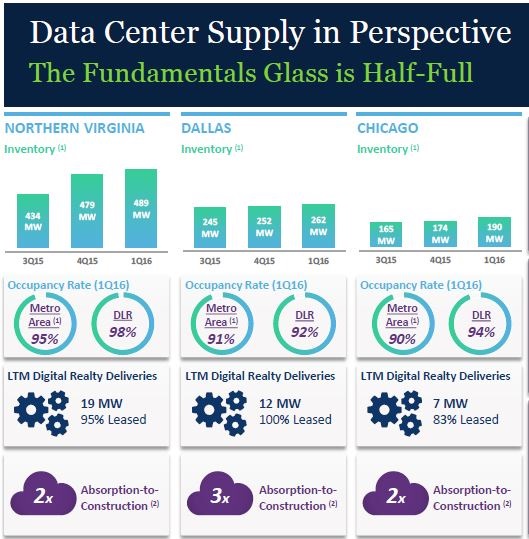 Essentially, customers have been leasing space at a faster rate than the industry can provide it.

Notably, Chicago wasn't one of the top data center markets in 2015, because of a lack of product available to lease. However, that situation will be remedied in just a few short months.

Digital began development in February of a 180,000-square foot phase there, which can accommodate an IT load up to 16 MW. This space is planned to come online in the first half of 2017.

QTS Realty is bringing the initial phase of its 30-acre Chicago Sun-Times campus online this summer.

Also in Chicago, DuPont Fabros Technology is accelerating its CH-3 redevelopment, because 89% of CH-2 is already committed, with leases scheduled to commence during the third quarter of this year.

CyrusOne made the biggest splash in the Chicago market, announcing a 15-year sale-leaseback of the 428,000-square foot CME Group Globex data center.

On its earnings call, CyrusOne CEO Gary Wojtaszek announced the intention to build a single 500,000-square foot data center on the 15 acres of land acquired from CME as part of the deal. While the timing of this project was not revealed, CyrusOne has received unprecedented interest from financial firms since announcing the CME deal.

Lease it While You Still Can

During the past twelve months, DuPont Fabros leased 78 MW of wholesale space compared with a 30 MW historical average, notably including a 16 MW build-to-suit in Santa Clara, leased at an initial yield 200 bps higher than previous phases.

According to DuPont CEO Chris Eldredge on his Q1 earnings call, "We are in the early stages of cloud; I'd say we are in the first inning…" His major concern was not having enough space to satisfy customer demand.

QTS recently announced it had leased 4 MW to a hyperscale cloud customer in Dallas, and then revealed that the customer requirement had doubled to 8 MW.

In response to the high demand, CoreSite has accelerated the development of its entire 236,000-square foot SV7 facility.

There was also significant activity in Asia Pacific, EMEA, and Latin America.

In addition to major projects in New York and Silicon Valley, Equinix announced expansion in Hong Kong. Equinix has over 16 expansion projects underway, including Sao Paulo, Amsterdam, London, and Sydney.

CEO Smith said they were "…seeing a resurgence of subsea cable projects to support global cloud deployments and growth of international data traffic, which are creating new opportunities for Equinix." He mentioned there were more than 50 global submarine cable projects under consideration over the coming two years.

Digital Realty pre-leased the entire first phase of its new Osaka data center to a cloud customer, and is expanding into the Frankfurt market in Germany.

While it might seem like marketing 101, design changes have also made a huge difference in the willingness for large cloud providers to lease space from third-party landlords. Most notably, the flexibility to deliver different levels of resiliency (N, N+1, N+2) within the same large building shell has been a major factor.

Digital's SVP of sales and marketing, Matt Miszewski, addressed this on the Q1 2016 earnings call:

"I think over the past six months they have been satisfied that multitenant data center providers like us have the ability to hit their needs, and their capital is better spent focusing on the strategic imperatives that they have in front of them. While they may have hit a gap with their own builds, they all have sort of come to the realization that leasing is something that they need to not just explore but execute on."

Previously, wholesale landlords provided generally an N+2 product, which is what they thought most customers wanted based upon past experience.

How long will this upswing in demand from public cloud providers last? Unfortunately, there is no easy answer to that question.

However, a major takeaway from the 2016 Q1 earnings season was that despite record leasing for two consecutive quarters, the pipeline of new deals remains as robust as ever.

While the potential exists for overbuilding in some markets, it appears unlikely to become a major issue for any of the publicly traded data center REITs. Streamlined construction methods allow for phased developments to provide just-in-time data halls. This contributes to high utilization of facilities, which helps to drive double-digit returns on invested capital.

Wall Street has forced the sector to become good at allocating capital carefully, which imposes development discipline. This is reflected in the sector continuing to hit all-time highs, as investors are confident management will navigate these uncharted waters with one eye towards the horizon and the other on the bottom line.