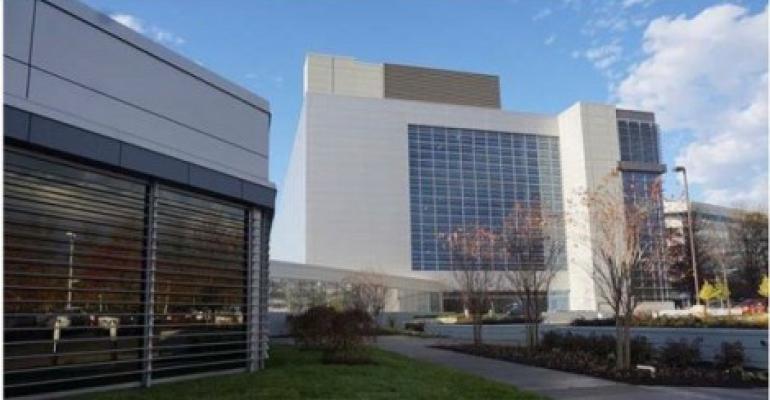 CoreSite Realty knocked the cover off the ball last year, and it appears that leasing momentum has continued to accelerate into Q1 2016.

The major takeaway from the Q1 conference call Thursday was how quickly the company will be converting signed deals into lease commencements to drive earnings growth in 2016.

Most companies would be pleased to announce a penny or two increase. CoreSite eclipsed its prior guidance by $0.14 at the midpoint, or a 4.1 percent increase in just over 90 days.

In a bit of symmetry Mr. Market bid CoreSite shares up by 4.19 percent, ending the day at an all-time high of $75.33 per share. There are very few REITs that deserve to trade at 21x 2016e FFO, but CoreSite has continued to deliver the growth to back it up.

Hyperscale public cloud providers have amped up their deployments significantly in 2016 in a digital land grab to compete for market share. This has become a windfall for data center REITs which have powered shell space available to deliver data halls quickly.

While the paradigm shift of enterprise IT stacks to the cloud is in the early innings, large cloud providers are helping data center REITs like CoreSite hit leasing home runs right off the bat.

Enterprise customers accounted for 53 percent of the deals, with 24 new logos added during the quarter. CoreSite's focus on high-performance, low-latency requirements remains its bread and butter.

Core Site's ability to deliver large data halls quickly has paid off handsomely for shareholders in 2016. However, management is keenly aware the "cloud burst" of leasing in Q4 2015 and FY 2016 could be a one-off anomaly rather than a trend. 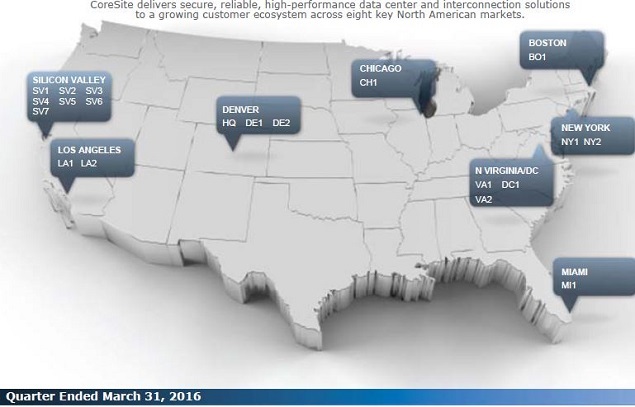 Data center REITs are faced with the challenge of balancing the recent spike in demand and space absorption in key markets over the past couple of years.

CoreSite has 15 percent of its net rentable square feet available for lease, with another 30 percent of portfolio capacity currently being built out.

CoreSite will essentially have built out its entire Santa Clara and Northern Virginia inventory after it delivers and leases this latest round of space. However, due to existing tenants not exercising right of first refusal on adjacent space, the company appears to have overshot the mark in Los Angeles.

Santa Clara: The CoreSite SV6 facility is a powered shell, 100 percent leased to a build-to-suit customer signed in April 2015, scheduled to be delivered Q2 2016.

Available space at CoreSite's SV7 in this tight data center market became the epicenter for leasing and construction activity during Q1:

Virginia: CoreSite has a small amount of capacity left in 80 percent leased VA2 Phase 2, which was completed in Q4 2015.

Notably, the LA market is still CoreSite's largest source of revenue at 27.6 percent, closely followed by San Francisco Bay at 24.4 percent, and Northern Virginia at 21.6 percent.

While the Los Angeles data center market has only been growing ~2 MW per year, CoreSite is a major player in this media/content distribution-focused market.

During the conference call, CEO Tom Ray said in retrospect, the large LA2 expansion may have been premature. However, LA2 is an owned by CoreSite, while LA1 is a leased facility. During Q1 2016 leasing in CoreSite's LA2 eclipsed the iconic LA1 One Wilshire facility for the first time.

One of the major dilemmas facing data center REIT investors and management alike is trying to understand how the enterprise paradigm shift to public, private, and hybrid cloud will play out over time.

However, it is becoming increasing clear that data center REITs positioned to deliver space quickly are a valuable piece of the puzzle for cloud providers battling it out for market share.

CoreSite's connectivity strategy of providing on-ramps to Amazon Web Services and other hyperscale cloud players continues to drive outperformance. The flexibility to deliver high-performance space cabinet by cabinet, along with the capability to selectively lease wholesale space -- and deliver it quickly -- has paid off handsomely for investors.

On the earnings call CoreSite acknowledged the need to put new pins in the map in Santa Clara, Northern Virginia, and Chicago; but similar to last quarter, management continues to keep those cards close to the vest.