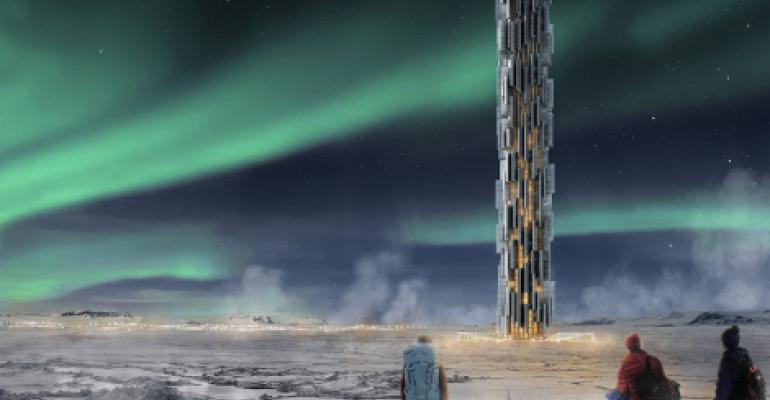 While Microsoft’s infrastructure researchers investigate how deep they can sink a data center pod in the ocean, two Italian architects propose trying to push the limits in the opposite direction.

One of the three designs to win this year’s skyscraper design contest by the eVolo Magazine is a 65-story cylindrical data center that looks like something Saruman the White would have built to keep his data in. The Data Tower, created by architects Marco Merletti and Valeria Mercuri, is a radical new take on the use of space, energy efficiency, and elegance in data center design.

The architects have imagined a tower where server-filled pods are lifted up to take their spots automatically, coming down when needed for technical work. The pods with IT gear sit outside of the tower, while the inside acts as a giant chimney, where they exhaust hot air that gets pulled from outside. A massive fan at the top expels some of the hot air, while the rest of it gets recycled for comfort or greenhouse heating.

Merletti thinks we should treat data centers the same way we used to treat libraries as a society in the past. Old libraries had grand designs to reflect the importance of their function as repositories of human culture and knowledge, a function data centers are taking over today, he told Computer World. 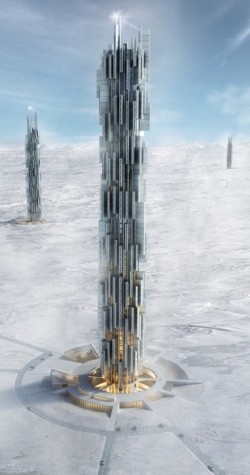 The design was inspired by motherboards, with their swappable components, Vokswagen’s Car Towers in Wolfsburg, Germany, and the Apple Mac Pro tower, Merletti said. It also uses many key data center design concepts, such as free cooling. The tower is designed to maximize the amount of surface in contact with outside air.

The hot-air chimney in the center is similar to the novel data center design concept created by a startup called Vapor IO, whose cylindrical IT pods, called Vapor Chambers, also feature a hot column inside with a fan on top that helps get hot air out of the pod.

The architects propose Iceland as the ideal place to build their Data Tower. The country’s location close to North America and Europe, its cold climate, and abundance of renewable energy make it a good fit. 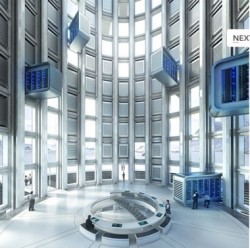 As our society increasingly relies on digital services, the unique problems in data center design attract attention from designers outside of the data center world, who propose unorthodox design ideas in attempts to envision new, better ways to build data centers in the future. Another example of this trend is an Estonian startup called Project Rhizome, which is thinking of ways to better integrate data centers into densely populated urban areas.

eVolo, an architecture and design journal, has held its futuristic skyscraper design competition since 2006. The other two winners in this year’s contest were a design that proposes a continuous horizontal skyscraper around New York City’s Central Park, which is sunken to create more space for housing with unobstructed views, and a vertical control terminal for drones that would provide services to New York residents.

In addition to the three winners, the jury selected 21 honorable mentions out of about 490 projects received.