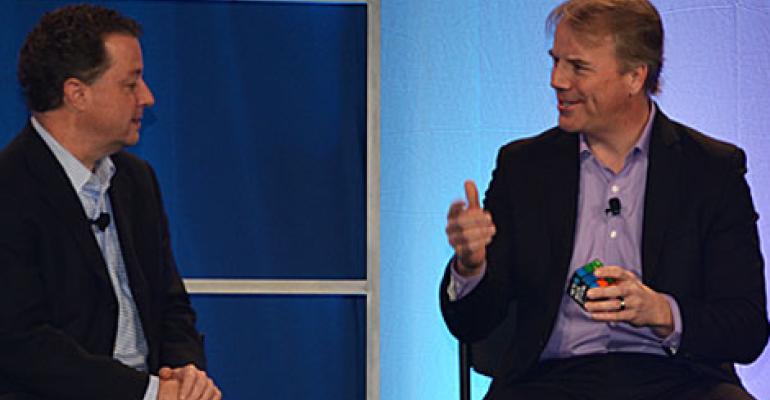 Gartner analyst Ray Paquet interviews Dean Nelson (left) of eBay&#8217;s global foundation services about what impacts the recent deployment of eBay&#8217;s dashboard metrics have had on the organization in 2013. (Photo by Colleen Miller.)
Companies>eBay

Starts collaboration group with top infrastructure execs from Google, Microsoft, and other firms

Dean Nelson, who has overseen eBay’s global data center strategy for more than six years, has left the company. Eddie Schutter, a former top infrastructure and product development engineer, who joined eBay last year, has stepped into Nelson’s role, a company spokesperson said in an email.

Nelson has been the face of data center innovation at eBay during his time there. On his watch, the company deployed in production some of the more unusual critical infrastructure ideas, such as containerized, or modular data centers, ultra-high-density power and cooling infrastructure, and fuel cells.

One of his more recent projects, a data center eBay designed and built in South Jordan, Utah, is likely the world’s only data center powered entirely by fuel cells. The facility, which came online in 2013, has no diesel generators, using the local utility grid as its backup power source.

Before Utah, the company launched a data center in Phoenix, which had both traditional raised-floor space inside and data center containers on the roof of the building for rapid, high-density capacity expansion.

It was also a showcase for energy efficient design – a high-density data center that relied primarily on outside air for cooling in the hot Phoenix climate.

Nelson joined eBay after about six years at Sun Microsystems, where he started as a technical manager at the company's data center engineering labs and worked his way up to senior director of global lab and data center design services. In 2010, Sun was acquired by Oracle.

Nelson’s LinkedIn profile says he has founded a new organization called Infrastructure Masons, a non-profit collaboration and information sharing group for infrastructure professionals. Other “masons” in the group, making up its advisory council, include data center heads from Google and Microsoft, Switch founder and CEO Rob Roy, former Digital Realty Trust CTO Jim Smith, and eBay’s Schutter, according to the description on LinkedIn.

“These leaders have personally developed more than $1B of technical infrastructure each,” the description reads.

We have reached out to Nelson and will write an update with more details once we hear back.

Schutter started at eBay in July 2015 as head of global data center network and security services, reporting to Nelson. He joined the company after more than four years at AT&T, where he first worked as lead principal technical architect of global technical space operations and later as director of new technology product development engineering for AT&T Labs.