Geographic expansion and abstraction of infrastructure for developers are the frontlines of today’s cloud war; machine learning is the next step

In Google’s first big public attempt to build the case that it is a formidable competitor to Amazon and Microsoft in enterprise cloud services, some of the company’s top execs took the stage at its first cloud user conference in San Francisco Wednesday.

From Google CEO Sundar Pichai and chairman and former CEO Eric Schmidt to senior VP Diane Greene, senior VP of technical infrastructure Urs Hölzle, and VP of product management Brian Stevens, it was an all-hands-on-deck kind of keynote at Google Cloud Platform Next 2016.

“We are dead serious about this business,” Greene, the founder of VMware who joined Google last year to lead its enterprise business, said during a press conference after the keynote. The company has invested a lot of money in its data centers and continues to do so, and “we’re going to put them to work as much as we can.”

Reiterating what he has said before, Hölzle said during the press conference that cloud and IT services have the potential to become a much bigger business than online ads for Google, since the addressable market is “much larger.”

Google execs were careful not to mention the competition by name during the keynote, referring to Amazon Web Services only once, when they announced Stackdriver, the new cloud management tool that combines monitoring and logging for both Google Cloud Platform and AWS.

They built their case primarily by focusing on high performance of Google’s infrastructure, low cost of its cloud services, and the variety of services and features, all designed to let developers do what they do without worrying about infrastructure.

Google also highlighted some new big customers, inviting Coca-Cola CTO Alan Boehme and Spotify’s VP of infrastructure Nicholas Harteau on stage to talk about their use of its cloud services. The Walt Disney Company was another major recent customer win.

Competing with the other cloud giants means trying to keep up with them in geographic scale. While Google’s data center infrastructure is already enormous and global in nature, the number of physical locations, or availability regions its cloud services can be hosted in, is well lower than Amazon’s or Microsoft’s.

“Our data centers and our systems infrastructure are invisible to our customers and partners, but they really underpin everything we do,” Greene said.

Google and its biggest cloud competitors have been lowering prices of their cloud services over the past several years, and data center efficiency has been one of the primary weapons in this cut-throat price war. It is the efficiency of Google’s infrastructure that enables the company to deliver a leading price-performance ratio, Greene said, echoing what Amazon CTO Werner Vogels has said about AWS.

The company did not say where those 10 upcoming regions would be. It generally doesn’t announce cloud locations too much ahead of time, Hölzle said.

Asia will be an important focus in this expansion, however. “You can definitely expect quite a few [cloud data center locations] in Asia as well,” he said. 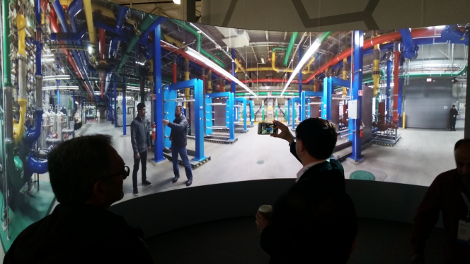 If it thinks geographic reach is important for competing in the cloud services market, Google has a lot of catching up to do. Today, it has only four cloud regions, Central US, Eastern US, Western Europe, and East Asia. There are four availability zones in the Central US region, and three in each of the other ones.

Microsoft’s Azure cloud runs in 22 regions around the world, including sites in North and South America, Europe, and Asia Pacific, and five more are in the works.

Amazon Web Services provides 12 regions, including a region dedicated specifically to serving US government agencies. AWS also has plans to add five more regions before the end of 2017.

Focus on Containers and Machine Learning

According to Schmidt, two key technologies will shape the next wave of innovation: application containers and machine learning. Google execs spent a lot of time during the keynote talking about them.

Docker containers take that work of orchestrating infrastructure resources out of the equation, Schmidt said. Containers are the next step in abstraction, and Kubernetes, the open source version of Google’s own container orchestration system, and Google Container Engine, the cloud-based container management and orchestration service, will play a key role in Google’s cloud strategy.

Application containers, which Google has been using internally for years, are what will ultimately enable developers to not worry about the infrastructure their code will run on.

The next step in evolution of applications, according to Schmidt, is machine learning. Google’s own use of machine learning in its products has tripled over the last year, Jeff Dean, a Google senior fellow, said.

Al Hilwa, program director for software development research at IDC, said in an emailed statement that it was not too late for Google to compete in the enterprise cloud market.

“The cloud wars are still relatively nascent, and while a couple of other players like AWS and Azure have been more enterprise focused and have garnered early leadership, the situation is fluid, and it is definitely early days,” Hilwa said.

Google’s cloud data center expansion plans are the biggest indication that the company is serious about this market, he said. Another major indication is the focus on new capabilities to support developers in using DevOps processes.

“The battle continues on two major dimensions; one is data center reach and scale, and the other is PaaS functional richness.”