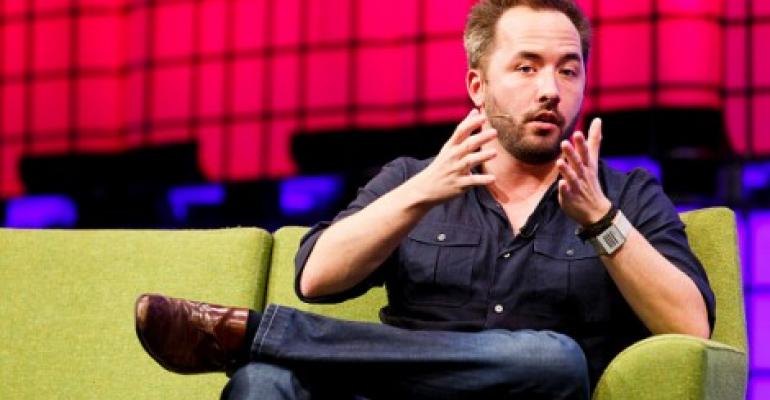 Drew Houston, Founder and CEO of Dropbox, in conversation with Laurie Segall from CNN on the center stage at the 2014 Web Summit in November 2014 in Dublin, Ireland. (Photo by Tristan Fewings/Getty Images)
Shared

Moving Away from AWS Cloud: Dropbox Isn’t an Anomaly, and Here’s Why

With 500 million users, Dropbox has grown considerably since its launch in 2008, and now 90 percent of its data is stored on its custom-built infrastructure

As Amazon Web Services was blowing out the candles on its 10th birthday cake, AWS customer Dropbox was not afraid to be a bit of a party pooper.

Let me explain: WIRED published an article on Monday outlining how Dropbox had decided to move most of its infrastructure away from AWS cloud. Essentially, the San Francisco-based cloud storage company has mostly outgrown AWS cloud, and for the past two-and-a-half years has been building its own infrastructure. With 500 million users, Dropbox has grown considerably since its launch in 2008, and now 90 percent of its data is stored on its custom-built infrastructure.

If you’re wondering how it’s possible to outgrow a global infrastructure like AWS, which spans 12 geographic regions with 5 more to be added this year, it’s a fair question. Dropbox, and others, are doing what they can to answer it.

It Costs How Much?

A big factor is cost. While AWS is convenient and enables customers to spin instances on and off, it is not cheap. This narrative certainly is nothing new; several years ago marketing software startup Moz started to move away from AWS cloud in favor of its private cloud. In 2014, Moz CEO Sarah Bird said that it was spending “$6.2 million at Amazon Web Services, and a mere $2.8 million on [its] own data centers.” Simply put, the cloud killed its margins.

Despite the AWS price drops over the years, Dropbox told WIRED that it gets “substantial economic value” by operating its own infrastructure. Dropbox VP of engineering Akhil Gupta rightly said “[n]obody is running a cloud business as a charity…there is some margin somewhere.”

On the other hand, hiring and retaining the people to create a custom-built infrastructure is expensive. Hardware costs add up. So does cooling. And real estate. And so on and so on. You have to seriously consider all of the costs involved before you start moving data around.

“Dropbox stores two kinds of data: file content and metadata about files and users,” Gupta said in a blog post. “We’ve always had a hybrid cloud architecture, hosting metadata and our web servers in data centers we manage, and storing file content on Amazon. We were an early adopter of Amazon S3, which provided us with the ability to scale our operations rapidly and reliably. Amazon Web Services has, and continues to be, an invaluable partner—we couldn’t have grown as fast as we did without a service like AWS.”

Indeed, a hybrid approach is what Dropbox’s infrastructure will look like for the foreseeable future. The company said it plans to invest in its own infrastructure and it will partner with Amazon “where it makes sense”; for instance, later this year Dropbox will expand its partnership with AWS to store data in Germany for European business customers that request it. It’s unclear how many customers we’re talking about, or how much data, but Germany is a known for being particularly complex and stringent when it comes to data security so having a partner to navigate that is helpful.

With Tech, Could What’s Old be New Again?

If you follow fashion trends, you may know that a common school of thought is that trends cycle every 20 years. It does help explain the recent resurgence of 90s choker necklaces.

So if what’s old is new again, could tech trends like colocation have a comeback? Is owning a data center cool again? Not necessarily. Technology and the cloud are not one-size fits all. I expect we’ll continue to see companies augment their investments in their own infrastructure with AWS, and consultants and others that serve particular markets, enterprise for example, add on more services around moving workloads away from, and not just to, the cloud. This is where hosting providers and others come in. You know how hard it is to run a data center. You know what it takes to migrate a ton of data from one place to another. Capitalize on that knowledge and it could pay off big time.

Of course, Dropbox and Apple are among a special breed of companies. Moving away from AWS may not be a macro trend. For as many companies that move away from AWS, there are companies like Netflix going all-in. Then again, I never thought I’d regret throwing out a tattoo choker necklace I wore in the 90s, but here we are.

This first ran at http://www.thewhir.com/blog/moving-away-from-aws-cloud-dropbox-isnt-an-anomaly-and-heres-why