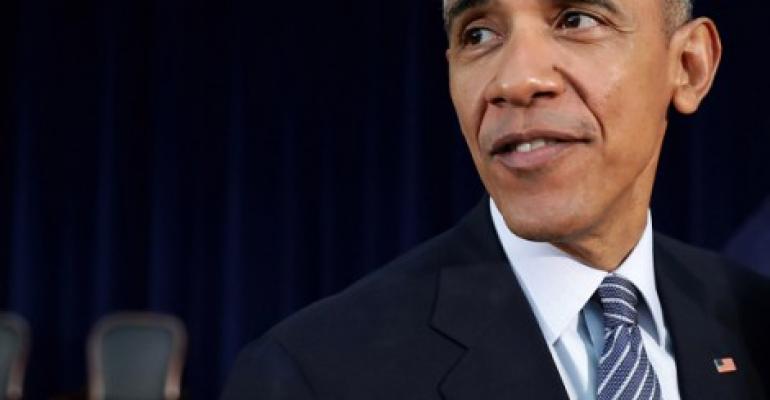 US President Barack Obama made a stop at Torchy’s Tacos in Austin, TX, before presenting a keynote at the South by Southwest Interactive (SXSW) festival on Friday afternoon.

“I love Austin, Texas,” Obama said to a cheering crowd as he sat down with Evan Smith, founder, CEO and Editor in Chief of the Texas Tribune to discuss 21st century civic engagement in a conversation that touched on encryption, the digital divide, and the private sector’s role in modernizing government’s use of technology.

Obama said that at this moment in history where technology, globalization and the economy is changing so fast, there are enormous opportunities, but the disruptions can be unsettling. In an hour-long conversation, Obama weighed in on several topics, including the controversial Apple v. FBI encryption case.

For obvious reasons, Obama couldn’t comment on the specific case between Apple v. FBI, but he did talk about privacy v. security at a broad-level – the delicate balancing act of ensuring citizens are safe while respecting their fundamental right to privacy.

“All of us value our privacy, and this is a society that is built on the Constitution and the Bill of Rights, and a healthy skepticism of overreaching government,” he said, noting that the Edward Snowden revelations have elevated awareness of these issues, despite the dangers to US citizens being “vastly overstated.”

Read more: Only 5% of Americans Unaware of Government Surveillance Programs in Post-Snowden Era

“Our intelligence agencies are pretty scrupulous about people on US soil,” he said, though they did identify “excesses overseas.” Of course, this is to be taken with a grain of salt as many reports over the past few years have found otherwise, for example, in 2014, The Washington Post ran an investigative report that found the NSA had been tracking communications of ordinary US citizens.

Obama said: “I am of the view that there are very real reasons that government can’t willy-nilly get into everyone’s smartphones that are full of very personal data.”

“The question we now have to ask is if technologically it is possible to make an impenetrable device or system – the system is so strong; there is no key or no door – then how do we apprehend the child pornographer, how do we disrupt a terrorist plot; what mechanisms do we have available?”

Part of the government’s plan here is to engage the private sector, as it has done in other areas with initiatives like the US Digital Services.

The US Digital Services team is “world-class technology office inside of government” that helps across agencies, Obama explained. It was brought forth after the botched government rollout of the Affordable Care Act website.

“This was a little embarrassing for me because I was the cool, early adopter president. My entire campaign had been premised on having really cool technology,” Obama said.

He said the private sector, and top talent from companies like Google and Facebook, are making an “enormous difference” in areas like making sure veterans are getting services on time and fixing clunky and bloated government systems.

“The reason I’m here really is to recruit all of you. It is to [ask] you as I’m about to leave office how can we come up with new ideas, platforms, approaches to solve some of the big problems we’re facing today.”

“I want to make sure that the next president and government from here on out is constantly in improvement mode.”

Read more: Where do the presidential candidates stand on encryption?

Whether it’s encryption, addressing the digital divide where many Americans don’t have access to Internet at home, or other issues, Obama said these are “solvable problems”: we just have to be willing to participate and not wait passively for someone else to solve it.

This first ran at http://www.thewhir.com/web-hosting-news/what-obama-thinks-of-privacy-vs-security-in-the-age-of-apple-vs-fbi