The race for data center customers seeking connectivity in Europe remains hotly contested, and Interxion Holdings, one of Europe's heavyweights in the space, is now competing with two US data center giants with global reach.

Interxion has been enjoying success in its core Western European markets, but now that Equinix has closed the acquisition of Interxion's major rival TelecityGroup, and Digital Realty has acquired Telx and now pursues a global strategy in which interconnection plays a key role, competition has gotten a lot hotter in Europe.

Notably, Equinix has agreed to sell eight Telecity data centers to secure a green light for the merger from EU antitrust regulators.

In October 2015, Digital Realty closed its $1.9 billion acquisition of the US colocation and interconnection heavyweight Telx. Its new strategy can be bad or good news for Interxion, depending on what Digital does next.

Just two months ago, a report circulated that Digital Realty might be eyeing Interxion as a way to scale up its European data center presence and the new big interconnection business it acquired in the Telx transaction.

Interxion was well on its way to a merger with Telecity before Equinix wedged itself in with a successful bid of its own. An acquisition by Digital could be a good way to bulk up for Interxion as it takes on its rival, which was a rival in Europe before but not nearly as big as it is now.

Interxion continues to focus upon controlling its own destiny as a pan-European data center provider. However, as more enterprises look to deploy new applications in the public cloud and compete in the global marketplace, Interxion may need to carefully consider its options, or risk being left behind.

On March 2, Interxion announced four expansions to go along with its Q4 earnings release and conference call. The expansion locations included:

These builds are expected to cost a total of €50 million, adding a total of approximately 3,900 square meters of equipped space and approximately 5MW of customer power in European data center markets.

These expansions were included in the Interxion 2016 CapEx budget of €210 million to €220 million. 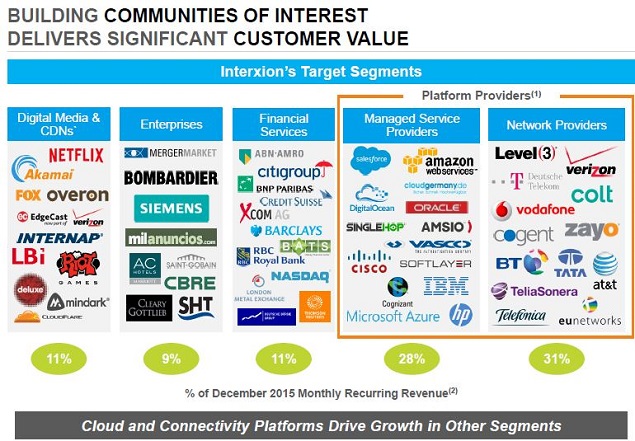 Subsequent to the end of Q4, Interxion opened the first phase of its FRA10 data center in Frankfurt.

On the earnings call, Interxion CFO Josh Joshi highlighted the initial results from the shift over to a recurring revenue model for cross-connects:

"In the fourth quarter, the company transitioned away from charging solely on a one-time nonrecurring fee for cross-connects and moved to recurring-fee model across all countries for all new cross-connect sales… We do expect our quarterly nonrecurring revenue to continue to be lumpy in nature and return to the slightly lower range of between €4 million to €5 million per quarter."

This transition is one area which investors should closely monitor moving forward.

Interxion CEO David Ruberg was upbeat regarding leasing momentum for 2016: "Trends in IT continue to be in our favor, and Interxion spent most of 2015 strengthening our position by attracting cloud magnets to our data centers across the widest footprint in Western Europe. We believe that we are still at the beginning of the next major IT investment cycle as billions of IT dollars shipped from legacy IT deployments to the cloud over the next several years."

In an increasingly competitive EU environment, will the Interxion local market focus, or "Communities of Interest" strategy, be enough to carry the day?

Equinix president and CEO Stephen Smith said global businesses were increasingly relying on interconnection to provide rich user experience everywhere around the world. These trends will only accelerate as more data is stored in edge markets to support the Internet of Things.

Interxion appears to have an excellent foothold in many European edge markets. It owns nine of its 41 data center locations and is currently exercising purchase options for PAR7 and AMS7.

One question investors must answer for themselves: Will the Interxion piece of the pie become more attractive, or less attractive to potential suitors over time?

Want to know how other data center providers did in the fourth quarter? Curious about investing in data center companies in general? Visit the Data Center Knowledge Investing section for everything you need to know about this high-performing sector.