February was the last of three consecutive losing months for the NASDAQ, an event investors have not experienced since 2011. Seemingly immune to broader stock-market troubles, all data center REITs reported record leasing and earnings growth for the fourth quarter of 2015.

"Data center demand is not directly linked to job growth, household formation, or even the price of oil, although the drop over the last 18 months is striking," Digital Realty Trust CEO William Stein said on the company's earnings call last week. "We have the good fortune to be levered to secular demand drivers that are both somewhat independent from and growing faster than GDP." 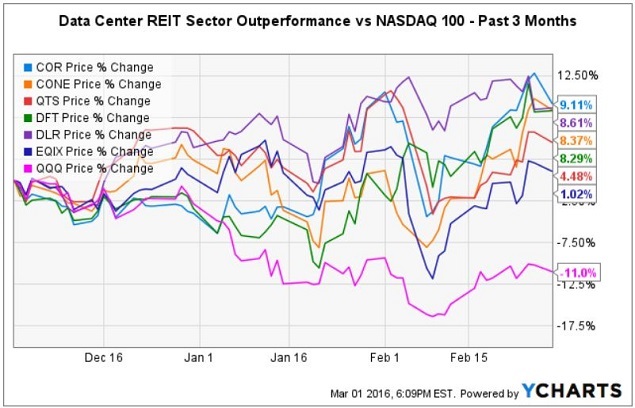 Data center REITs are also benefiting from the fact that many of the enterprises moving to cloud adapt a hybrid cloud approach -- a combination of public cloud services and dedicated data center infrastructure they control and manage themselves.

DFT reported a record 47MW in signed leases for 2015, including 12 leases for a combined 32MW in the fourth quarter. The results exceeded its previous annual leasing record by more than 5MW.

The company confirmed that Toronto expansion plans would impact earnings by early 2017, while management continues to evaluate potential expansion into Phoenix and Portland markets.

Currently, the company only has 1.5MW of available capacity, with another 30MW expected to be placed in service during 2016.

Notably, DFT was able to achieve a return on investment of 13 percent on its latest leasing activity, a full 100 basis points above its target return.

Colocation and connectivity focused CoreSite signed more revenue in 2015 than it has in any previous year. During 2015, CoreSite added 95 new customer logos, a 16 percent year-over-year increase, including 41 net new logos during Q4 2015 alone.

While the entire data center REIT sector performed well last year, CoreSite delivered sector-leading 50 percent in total returns to investors. However, CoreSite will be maxing out its existing powered shell and building capacity in some key markets, an important issue management will need to address in 2016.

Global interconnection and colocation giant Equinix, a Fortune 500 company with $18.5 billion market cap, is now the largest member of the exclusive data center REIT club. Equinix had a lot of changes to report during 2015, including, REIT approval mid-year, the acquisition of TelecityGroup in Europe, which made it the biggest data center provider in the region, and of Bit-isle in Japan.

Additionally, Equinix made substantial investments in its own IT platform to support hyperscale public cloud providers and to fund its sales and marketing initiatives targeting enterprise hybrid cloud customers moving forward.

This Wednesday, Equinix announced a four-continent expansion, planning to launch new data centers in Dallas, São Paulo, Tokyo, and Sydney in the near future.

Read more: Equinix: the Complicated Math of a Technology REIT

Previously, Digital had reported the six Telx leased locations at 100 percent occupancy. Now that Telx is a part of Digital, the space available for colocation and interconnection customer expansion is reported as inventory offered for lease. While there has been a lot of recent M&A activity in the data center REIT space, the $1.9 billion Telx acquisition was the only true game changer.

Digital Realty's Top 20 customers accounted for 44 percent of revenues at the end of 2015, while tenants who occupied less than 2,500 square feet each accounted for just 5.6 percent of revenue. Telx has beefed up Digital's colo and connectivity options to complement its global wholesale data center footprint, including a 152,650-square foot internet gateway in Atlanta.

Digital recently added a whole new market to its portfolio, buying 27 acres of land in Frankfurt, which will eventually house three data centers in this European financial center.

QTS continued to leverage its flexible suite of customer solutions and large-scale infrastructure to deliver 15.8 percent returns on invested capital. Management expects that core organic revenue growth for 2016 will be in the mid-teens.

QTS will be entering the Chicago data center market this year, launching the repurposed 133,000-square foot former Chicago Sun-Times press facility located on 30 acres near downtown. Management anticipates the mid-year 2016 opening of the initial 14,000-square foot phase will be a short-term drag on overall portfolio returns.

The company has been working through a backlog of large multi-megawatt contracts, where the deployments are phased over several quarters. These booked-not-billed contracts give QTS earnings visibility and the confidence to move forward with its current development plans.

CyrusOne pretty much hit the cover off the ball, reporting record leasing of 30MW, or more than 200,000 colocation square feet, in the fourth quarter. Cloud computing wins accounted for a large part of CyrusOne's leasing success.

CyrusOne expects to book between $19 and $24 million of annualized revenue in the second half of 2016, with the balance recognized in 2017.

Last year CyrusOne closed its $400 million acquisition of Cervalis, a colocation and disaster recovery data center provider with extensive operations in the New York market. On the earnings call, CEO Gary Wojtaszek revealed that CyrusOne is now looking to expand its operations into northern New Jersey.

Wojtaszek is agnostic regarding the New Jersey expansion and is willing to purchase land for ground-up development if a suitable facility can’t be bought at an attractive price. But, DuPont Fabros may just have a facility in New Jersey for sale that fits the bill.