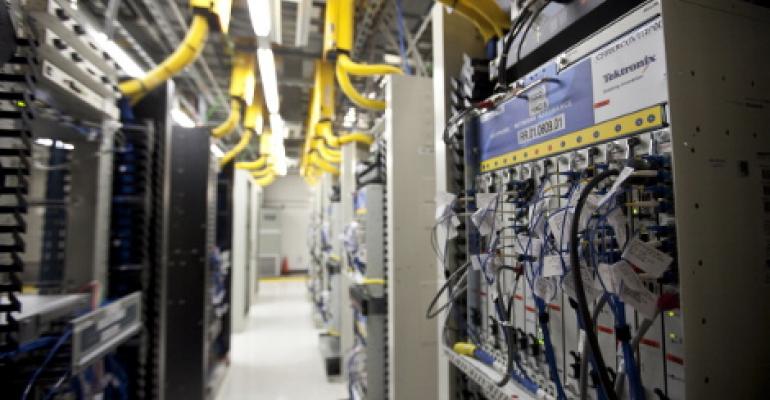 As telcos virtualize their networks, their switching facilities will look more and more like web-scale data centers

Two years ago, AT&T said 75 percent of its entire global network would be virtualized by 2020. What it didn’t say back then was what implications this wholesale network virtualization project would have for the facilities where that network lives – the countless central offices, or exchanges, in cities and rural areas built over the years to deliver the telco’s services.

As AT&T and other major telcos, such as Verizon, upend their sprawling network infrastructure to make it more agile through software, most of those facilities will eventually look less like typical central offices and more like cloud data centers. Sophisticated software running on simple commodity servers and switches will replace expensive specialized hardware appliances; customers will consume telco products as cloud services; and the facilities that support this infrastructure will be converted accordingly.

“We’re going to use already existing footprint of central offices across the country as kind of a distributed cloud,” Igal Elbaz, VP of innovation and ecosystem at AT&T, said.

A “significant number” of central offices will get electrical and mechanical infrastructure upgrades to convert them to data centers, he said.

It’s unclear how many of these facilities AT&T has exactly – the company doesn’t share that number publicly – but the gray, windowless concrete buildings are a familiar sight to most US city dwellers. The central offices vary in size: the ones in densely populated areas tend to be smaller, while remote aggregation facilities are larger.

AT&T calls the ones that have been converted “integrated cloud nodes.” The company has so far created about 70 of them, Elbaz said.

Learning from the Best

For ideas on the types of hardware that will go into those facilities, the big telcos have turned to none other than companies that have perfected the art and science of building cloud data center infrastructure on a global scale.

Together with data center services giant Equinix and the network technology vendors Nokia and Nexius, they formed a whole new group under OCP focused specifically on data center technology for network operators. The OCP Telco Project will serve as a way for these companies to tap into the innovation ecosystem and supply chain that have saved Facebook billions of dollars in data center costs.

Apple and Microsoft are OCP members, and so are major financial services companies, such as Goldman Sachs, Fidelity, Bank of America, and Capital One. Nearly all major IT vendors, such as HP, Cisco, Juniper, and IBM, participate, along with design manufacturers they compete with for the hyperscale data center business – companies like Taiwan’s Quanta Computer or Hyve Solutions, the division of Silicon Valley’s Synnex created specifically to supply hardware to the likes of Facebook.

The wide pool of vendors is important to what the telcos are doing. If Facebook found standard off-the-shelf HP or Dell servers too expensive for its scale, those who can build, or afford, specialized telco hardware comprise one of the most exclusive clubs.

There have traditionally been very few vendors a company like AT&T has been able to work with because of the sophistication of the appliances, Elbaz said. If open source network software and hardware for telcos gain traction, that pool of vendors will widen substantially, as the barrier of entry to the market will lower. For telcos that means one thing: lower cost.

Turning to Open Source for Answers

There’s also the benefit of having a group of engineers from different companies collaborating to solve technology problems specific to the telco industry. Software Defined Networking and Network Function Virtualization are key to delivering modern high-bandwidth network services to customers and making them easier to consume.

Regardless of the shift from hardware to software, these are still extremely sophisticated technologies, and a single company has to spend a lot more time and resources to develop them on its own. Now, in addition to participating in the multitude of open source networking software projects, telcos are turning to open source hardware.

Leveraging the open source ecosystem is a “fresh way” of designing and operating networks, Gagan Puranik, director for SDN architecture planning at Verizon, said. “The biggest thing for us is to create faster innovation. We have a great opportunity to redefine how we design our data centers,” he said, and the vendor pool that will help them do it will be a mix of traditional and non-traditional vendors.

For Equinix, joining the OCP Telco Project is a way to future-proof its business model, which relies heavily on interconnecting service providers, enterprises, and partners inside its data centers. “All these networks [the telcos that recently joined OCP] are our customers today, and they all connect to each other and to the cloud using IP protocol in our data centers,” Equinix CTO Ihab Tarazi said.

The data center provider, which has already built a sophisticated interconnection platform, wants to be part of the process as key decisions about the next generation of telco networks are made.

“What we see is an evolving architecture under OCP that supports the high scale and performance needs of applications and cloud, especially in the age of SDN and the explosion of mobility and (Internet of Things),” Tarazi said. Equinix has to make sure its platform supports this evolving architecture, because it needs the likes of AT&T, Verizon, and Deutsche Telekom to continue using its data centers to connect to each other, their customers, and cloud service providers.

“We continue to innovate with all of them today,” Tarazi said. “I suspect we’ll continue to evolve our interconnection model with them as well.”