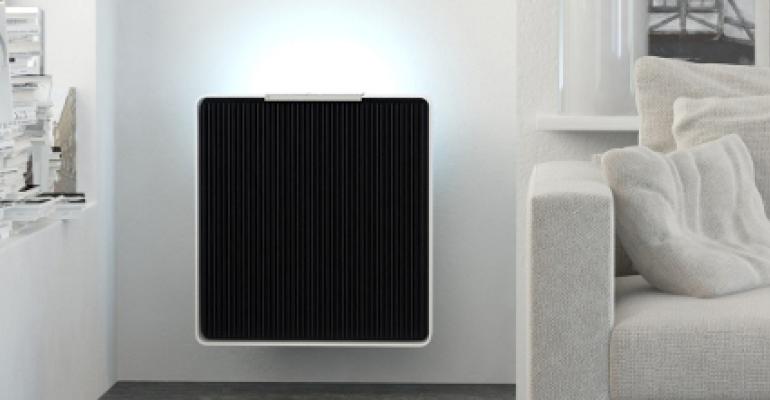 Hundreds of Qarnot&#8217;s Q.rad digital heaters in European homes act as a distributed computing grid that heats the homes with no cost to the residents (Image: Qarnot Computing)
Blades

The French company has teamed up with data center service provider DATA4, which operates 30MW of IT capacity across thirteen data centers in France, Italy, and Luxembourg, to create the system. As part of the partnership, DATA4 has also taken a majority financial stake in Qarnot, the companies announced Friday.

Qarnot places its server heaters, called Q.rad, in regular homes, offering residents a free heat source. The company refunds them the cost of electricity Q.rads consume, while renting the computing capacity of the distributed system to clients with high-performance computing needs, such as banking risk calculations, 3D animation, and scientific research.

A single Q.rad server can heat a room between 150 and 300 square feet in size, as long as the room meets modern insulation standards, the company claims. It says it has deployed 350 of them.

The point is to use computing capacity to reduce carbon emissions that would otherwise be associated with running space heaters. DATA4 is working on another waste heat reuse project, planning to build agricultural greenhouses next to its data center in Paris suburbs that will be heated by exhaust heat from the facility.

Now that Qarnot’s Q.rad system is integrated with HPC horsepower in DATA4 data centers, it can take on many more workloads and better handle spikes in demand. It will also offer DATA4’s network and storage services to its clients, while DATA4’s customers will have access to the computing capacity of Qarnot’s residential computing grid.

Its new financial stakeholder will also help the company grow and place its “digital heaters” in more homes.

The distributed system is managed by Q.ware, Qarnot’s software that manages and distributes loads across the infrastructure. It ensures calculations are distributed optimally across centralized clusters in DATA4 facilities and Q.rad servers in European homes.

DATA4 will integrate a Q.ware software layer into its hosting services.