You won’t find hot SDN, cluster management, flash, or application container startups on this list. We specifically chose to narrow it down to companies we feel are addressing some of the biggest pain points in data center design and management.

This isn’t meant to be an exhaustive list, but the startups listed here are trying to solve big problems in interesting, innovative ways. Feel free to suggest other companies that should be on this list by submitting comments below or on our social media channels: Twitter, Facebook, LinkedIn, Google+.

Few companies have attempted to challenge the way people think about data center design as radically as Austin-based Vapor IO, which came out of stealth in March, has. The startup proposes that straight rows of IT racks and hot and cold aisles between them is not actually the most efficient way to use space or energy in the data center.

Its alternative, the Vapor Chamber, which consists of six wedge-shaped server racks arranged in a cylinder. Cold air comes into the servers from outside, and warm air gets exhausted into a “hot column” inside, which replaces the hot aisle. Exhaust air gets sucked out at the top of the chamber.

Vapor, which announced its first funding round earlier this month, claims its chamber saves space and offers a way to deploy a high-density data center anywhere with enough air conditioning and power. The company’s founder Cole Crawford likes to say that a defunct video rental store will do.

The startup also has developed a commercial server and rack management software product called Vapor Core and open sourced a portion of it as OpenDCRE, or Open Data Center Runtime Environment.

TSO can collect data from DCIM underneath, tap directly into CPU power, temperature, and utilization metrics through Intel’s Data Center Manager middleware, analyze data from the virtualization platform, and know who within the organization a VM or an application belongs to using data from ITSM software. The wider the variety of data the platform ingests, the more useful its output will be.

Be it a physical host or a VM, if it’s idling or being underutilized, TSO says it will find it and let you know.

Integration with Amazon Web Services is in the works, so customers can track their usage of cloud VMs, and integration with Microsoft Azure and numerous smaller cloud service providers are on the company’s to-do list.

One of TSO’s key strengths is its ability to show people in the organization who do not manage data centers but who hold a financial stake in the business how well their data centers are performing. It presents the information in a way they can understand. It gives them a clear picture of what it costs to run their applications.

Earlier this year TSO teamed up with Stanford research fellow Jonathan Koomey on a study that attempted to assess the amount of underutilized servers in the world’s data centers. They found that about 30 percent of all servers deployed worldwide are not doing any useful work, representing about $30 billion in sunk investment.

Croydon, UK-based Romonet came out of stealth in 2010 with the first iteration of its data center management platform that uses predictive modeling to pinpoint what effect any particular decision about data center design or management will have on performance or the bottom line. Its key strength is analyzing information about a data center from the financial perspective.

In another example, Iceotope, a company that sells immersion cooling systems for IT, used Romonet to prove the effectiveness of its technology to an investor to secure funding.

This year, the company added an element of Big Data analytics to its platform – a NoSQL-based analytics architecture that collects data from devices on the data center floor and makes predictions in near-real time about the facility’s health. The enhancement adds new day-to-day management capabilities the software didn’t provide before. 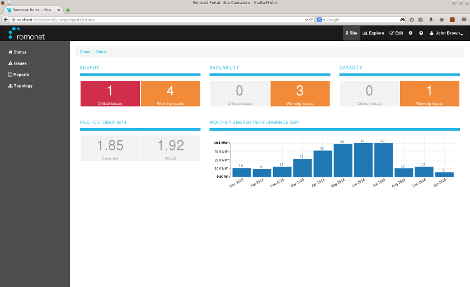 Romonet’s founders, CEO Zahl Limbuwala and CTO Liam Newcombe, were both involved in the formation of the Data Center Specialist Group within BCS – The Chartered Institute for IT (formerly known as the British Computer Society). BCS is a 50-year-old professional body that promotes study and use of communications and computing technology.

It’s no secret that most of the world’s data centers don’t run as efficiently as they could. There are issues of underutilization, inefficient use of power and cooling resources, poorly timed hardware upgrades, and so on. These inefficiencies result in overspending, and several startups have emerged to help data center operators find ways to get more efficient and save money. One of those startups is Coolan, which came out of stealth earlier this June.

Using historical operational data in Coolan’s database, the platform can tell you the failure rate of a particular server you may be thinking of buying. It can warn you that a group of hard drives in one of your data centers is likely to fail within the next couple of weeks, or alert you that someone has deployed new servers to a particular cluster in a particular data center. Those are just a few examples.

Coolan’s founder Amir Michael is a co-founder of the Open Compute Project. He’s worked on hardware and data center engineering teams at Facebook and Google.

Also on the founding team is Jonathan Heiliger, a long-time engineer and entrepreneur who led the teams that built the data center infrastructure that supported Facebook’s growth from 35 million to 800 million users between 2007 and 2012.

In December Megaport went public, raising AU$25 million in an IPO on the Australian Securities Exchange. Its shares were up 75 percent on the day of the debut.

Using software-defined networking technology, the company has made purchasing connectivity services as easy as purchasing cloud VMs from an Amazon Web Services or a Microsoft Azure. You can use a web interface, a mobile app, or Megaport’s open API to provision connectivity from any Megaport-enabled data center to any of the 250 or so service providers, clouds, or enterprises.

You can connect from an Equinix data center in Manhattan, for example, to AWS, choose what speed that connection needs to be and pay by the hour, day, or month of using the link.

Connectivity to all three of the major infrastructure cloud providers – AWS, Azure, and Google Cloud Platform – are available through Megaport. Other service providers include Rackspace, CloudFlare, Orion VM, and Servers Australia.

Megaport-enabled data centers are currently in the US and Asia Pacific, but the company has plans to expand into Europe next year.

The US locations are some of the most network-dense colocation facilities, such as 350 Cermak in Chicago, 111 8th Avenue and 60 Hudson Avenue in New York. In the US, the company is in data centers operated by Equinix, Telx, and CoreSite, among others.

It also has presence in many data centers in Sydney, Melbourne, Brisbane, and Auckland, as well as in Singapore and Hong Kong.

Also offering a simpler way to provision network links between your servers and servers of your cloud providers or partners in data centers around the world is Silicon Valley-based IIX. Its Software-as-a-Service platform called Console makes it easy to establish connections between any of the 150 data centers on its list.

The platform automates Layer 2 and Layer 3 BGP configuration and auto-assigns Autonomous System Numbers. It can be used through a graphic interface or a RESTful API.

The company, whose early adopters include Box and LinkedIn, has raised $65 million total, including a $26 million funding round earlier this year from a group of well-known Silicon Valley venture capitalists, such as New Enterprise Associates, Formation 8, Andy Bechtolsheim, Drew Perkins, and AME Cloud Ventures.

IIX has points of presence in data centers across North America, Europe, and Asia Pacific. The data center providers include Equinix, Telecity, and Interxion, as well as vXchnge, Hurricane Electric, and T5 Data Centers.

While Schneider Electric, Emerson Network Power, and Nlyte Software continue to dominate the DCIM software market, some players that do a really good job addressing big DCIM pain points have emerged. One of them is five-year-old Device42.

Device42 offers a “low-cost way to get started with DCIM,” Jennifer Koppy, who covers DCIM software at IDC, told us. DCIM is notorious for the huge amounts of money companies have to spend on deploying the solutions and the lengthy deployment schedules. Device42’s focus on this problem has helped the relatively small company grow faster than many others in the space.

The company has closed deals with companies internationally, including Apple, Splunk, Verizon, Activision, Cisco, Carnegie Mellon, NCAA, and Mercedes Benz, among others.