As more people get mobile devices and as people and businesses use more cloud services, cloud traffic will grow faster than data center traffic.

The latest update to Cisco’s Global Cloud Index, an annual assessment and future projection of global network traffic trends, forecasts that while data center networking traffic will triple from 2014 to 2019, global cloud traffic – considered a subset of data center traffic by Cisco – will more than quadruple within the same timeframe.

In fact, five years from now, cloud traffic will account for most data center network traffic, according to Cisco.

Here are 10 key figures from the latest cloud index:

26 months: The length of time the world’s entire population in 2019 would have to stream music to generate the amount of traffic Cisco expects to travel to, from, and between the world’s data centers that year.

16 terabytes: Data storage capacity of a Samsung flash drive currently considered to be the world’s largest hard drive. A zettabyte is about 1 billion terabytes.

3.2: Workload density per physical server in traditional (non-cloud) data centers expected in 2019 – a small increase from 2 workloads per server in 2014.

44 percent: Percentage of cloud workloads that will run in private cloud data centers in 2019 – down from 70 percent last year. 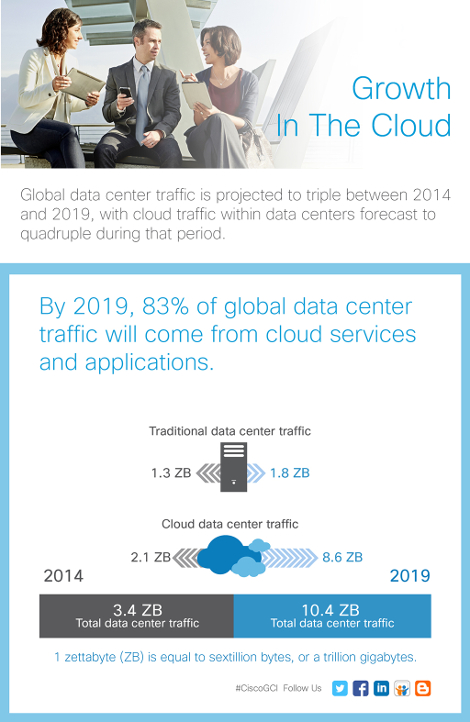