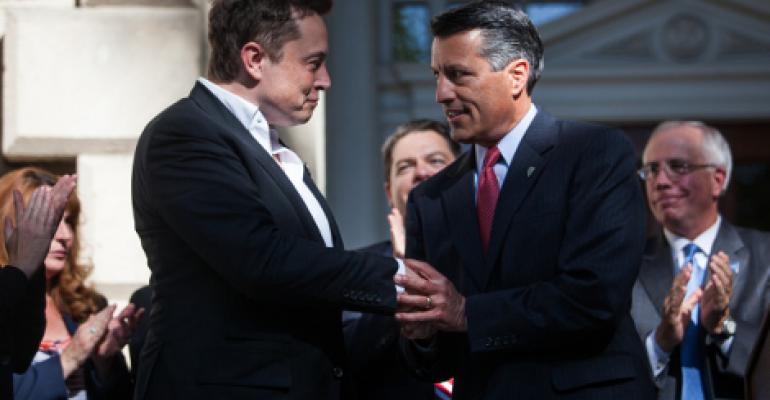 Elon Musk, CEO of Tesla Motors, is introduced by Governor Brian Sandoval of Nevada during a press conference at the Nevada State Capitol, September 4, 2014 in Carson City, Nevada. Musk and Sandoval announced a plan to build a Tesla Gigafactory in Nevada to produce batteries for electric vehicles providing 6,500 jobs to the state. (Photo by Max Whittaker/Getty Images)
Business

Report: Tesla Battery Plant in Reno to Include Data Center

The massive Tesla Motors battery plant that’s currently under construction just outside of Reno, Nevada, will include a data center, adding to the data center cluster that’s forming east of the city.

The future $5 billion Tesla Gigafactory’s footprint will be 10 million square feet, some if which will be used to build a data center, Reno Gazette Journal reported, citing permits the electric-car company filed with local officials. The data center project will involve robotics, according to the publication.

Tesla has been picking up pace at the site. It has applied for more than 20 construction permits in the last four months alone, which is as many as it applied for in the first year since it started construction in Reno.

The Reno site neighbors a rapidly growing Apple data center campus. Also nearby, Las Vegas data center provider Switch announced plans to build a $1 billion data center, which it claims will be the biggest in the world. eBay has signed up as anchor tenant for the Switch facility. Rackspace has been exploring the area as a potential location for its next data center.

While Tesla will be using the data center it is planning to build in Reno, it is also trying to break into the data center market as a vendor. Earlier this year, the company introduced an energy storage solution for buildings, announcing a pilot deployment at an Amazon Web Services data center on the West Coast.

Aiming to provide energy storage to help companies use intermittent renewable energy sources, such as solar and wind, the solution isn’t only for data centers – Target, Enernoc, and Jackson Family Wines have also launched pilots – but data centers could become a primary category of end users, if Tesla can demonstrate that economics of the technology makes sense for mission critical facilities that not only consume a lot of power but also require high levels of reliability.