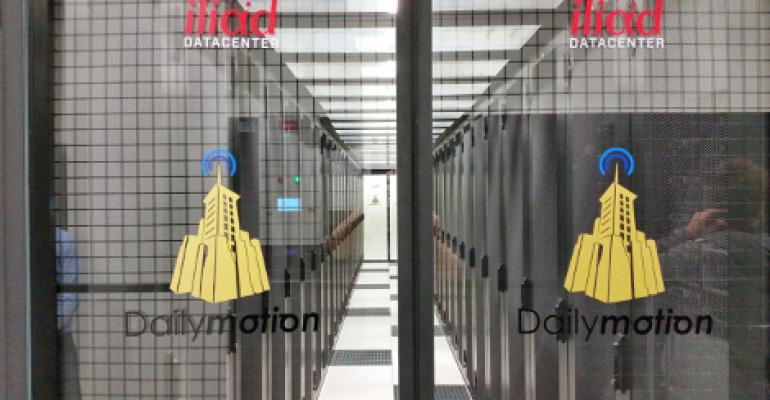 A pod filled with Dalymotion&#8217;s caching servers at an Iliad data center outside of Paris (Photo: Yevgeniy Sverdlik)
Blades

One accusation nobody can level against the team behind French service provider Online’s hosting and cloud services business is being hesitant to think outside the box.

Following April’s launch of a bare-metal cloud service underpinned by ARM-powered servers and cloud software, both designed in-house, Online this month announced another bare-metal cloud offering, this time for high-performance workloads, built on IBM servers run by Power, the processor architecture that is Big Blue’s challenge to Intel’s x86 chips that dominate the data center market.

Online, subsidiary of the French telco Iliad, launched the ARM-based service into preview last year. It came out of preview this April as Scaleway. While Scaleway’s sweet-spot workloads are scale-out web applications, the Power-based offering is there for heavy lifting, such as processing database transactions or Big Data analytics. Customers can provision both ARM and Power platforms as they would provision VMs in public cloud, such as Amazon Web Services or Microsoft Azure.

Here's a photo tour of one of Iliad's Paris data centers

Now that IBM has gotten out of the x86 server business – after having sold its System x product line to Lenovo – Power is its main focus as far as non-mainframe servers go. It’s taken an unusual approach to growing this business, launching the OpenPower Foundation together with a handful of other tech giants: Google, Nvidia, Mellanox, and Tyan. It has also “opened” the architecture, meaning companies can license processor IP if they want to build chips of their own, while foundation members, through an interface, get direct access to system memory to integrate Power chips with FPGAs or GPUs for acceleration.

Sumit Gupta, VP of OpenPower alliances at IBM, said such integrations were a way to address the recent slowdown in CPU performance advances. “Fundamentally, if you look at what’s happening in the data center, we’re just not seeing the rate of innovation that used to be there in the past,” he said. As CPU progress slows, accelerators become increasingly important, because users have grown accustomed to annual 20- or 30-percent performance improvements.

Gupta joined IBM this May after seven years at Nvidia, where he led the graphics processor maker’s GPU Accelerated Data Center Computing unit.

The Accelerator Race against Intel

The use of GPUs and FPGAs in tandem with CPUs is on the rise, with GPUs becoming a mainstay in high-performance computing and FPGAs making their way into big global cloud providers’ data centers. Nearly 90 systems on the latest Top500, the biannually updated list of the world’s fastest supercomputers, were powered by the combination of CPUs and GPUs. Almost 90 percent of all systems on the list, however, use Intel chips.

Intel also appears to be dominating the nascent FPGA market for cloud servers, and if its recent $16.7-billion acquisition of Altera, the leading FPGA supplier, is any indication, it has every intention to hold on to that position. FPGAs, or Field Programmable Gate Arrays, are semiconductors that can be reconfigured based on specific application needs. Intel uses them to create custom platforms for some of its biggest customers. The latest spec for its cloud servers Microsoft has contributed to the Open Compute project, for example, includes support for FPGAs, in combination with Intel Xeon chips.

OpenPower’s big differentiator that sets it apart from Intel in this accelerator race is openness, according to Gupta. Users like Google or vendors like Tyan or Mellanox can build custom solutions based on Power with their own feature sets while keeping their source code to themselves, he said.