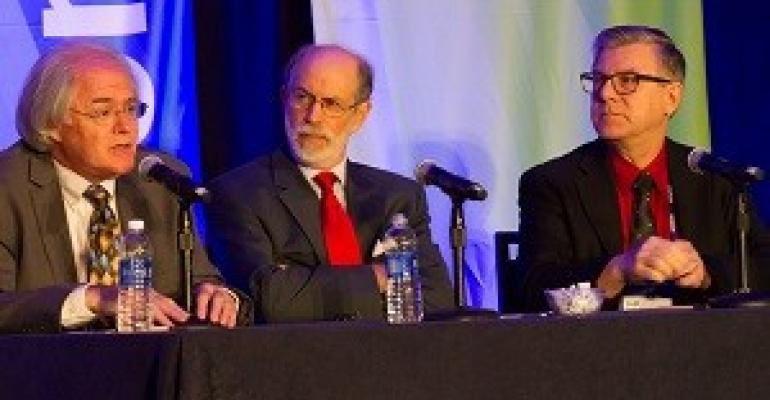 NATIONAL HARBOR, Md. -- Data center managers used to be relegated to the bottom floors and only showed their faces when end users experienced computer problems, but things have changed for them. Today, they participate in board meetings and have a tremendous influence on C-level decision makers.

With that in mind, the three panelists who spoke at the Data Center World conference here Tuesday about their growing concern with the potential impact of an Electromagnetic Pulse (EMP) attack on critical infrastructure called upon attendees to use their influence to bring awareness to a critical issue that could literally “take down our nation.”

“Can you imagine a United States without electricity?” Frank Gaffney, founder and president of the Center for Security Policy, a conservative national security think tank in Washington, D.C., asked the audience.

It may be hard to conceive, but that’s what would happen if the US electrical grid suffered an EMP attack, Gaffney said. If a terrorist or a terrorist nation got hold of a conventional nuclear weapon and detonated it high in the earth’s atmosphere over a specific target, the resulting powerful current would fry and disable all electrical equipment for thousands of miles, he said.

Considering that a “recently translated military doctrine from Iran mentioned EMP as a weapon more than 20 times,” and that the US has already experienced attempts to bring down parts of the grid before, it’s a very real threat, Gaffney said. Besides, if a terrorist doesn’t strike, it’s just a matter of time before the sun does. On July 23, 2014—the second anniversary of a near-miss with a Carrington-class solar storm—NASA reported there was a 12-percent probability one would hit the earth in the next decade.

“Every 850 years solar flares grow very large and one hits us,” Gaffney explained. “The last time it happened, one hit the earth square on in 1859. Do the math. We’re in the zone. Three years ago, one came within a week to where the earth would have been in its rotation.”

“It would, in effect, reduce our technology-based society to pre-industrial modes of communication and subsistence,” he said.

Lloyd’s of London, one of the world’s largest insurance providers, published a “what-if” scenario in July. If 15 states were blacked out for up to two weeks, as many as 93 million people would be affected, causing up to $1 trillion in economic damage. In the event that power stays out for an entire year, elaborated Gaffney, nine out of 10 people would die without food, water, and medication.

Calling a failure of the US grid both a nation-ending event and a data center-ending event, he stressed the importance of data centers taking measures to protect critical infrastructure and data should the grid go down.

“Data centers are quickly replacing telecommunication centers. Everything’s a data center,” said Michael Caruso of ETS-Lindgren Inc., a company that provides solutions for detecting, measuring, and shielding EMP waves. “Folks that operate them are absolutely critical to the survival of our society. This subject should be on the table in board meetings when talking about disaster recovery and abatement plans.”

While the US military is protecting nuclear assets from EMP threats, the government has been slow to create legislation to make it mandatory for utilities. Ironically, they resist because of the cost; yet they have the most at stake, he said.

The good news for data centers is that the technology that can protect from EMP threats exists and is in use today. Caruso said RF shields and Faraday cages are affordable ways to protect either new facilities or existing ones. Both deflect electromagnetic energy.

He also outlined three levels of protection: Level One would use a Faraday cage to house data center equipment and protect all points of entry during an event. The facility, support, and utilities might go down, but the actual equipment would be protected and be able to be brought back online once the utilities were restored.

Level Two is an auxillary-protected building where a Faraday cage would house power units, back-up generators, and cooling systems. This would allow a facility to operate through an event without disruption.

Level Three represents a multi-story facility that could be retrofitted with a number of small Faraday cages that house the most critical equipment or infrastructure.

All three levels should be discussed with an organization’s senior executives, especially with non-government and non-military entities—most of which are not even aware of the threat, said Caruso.

“We could use your help to spread the word,” concluded Scott Tucker, an architect who builds data centers. "All of us have a stake in getting these problems resolved. I hope we have moved you to become part of the solution for your own personal and corporate good.”