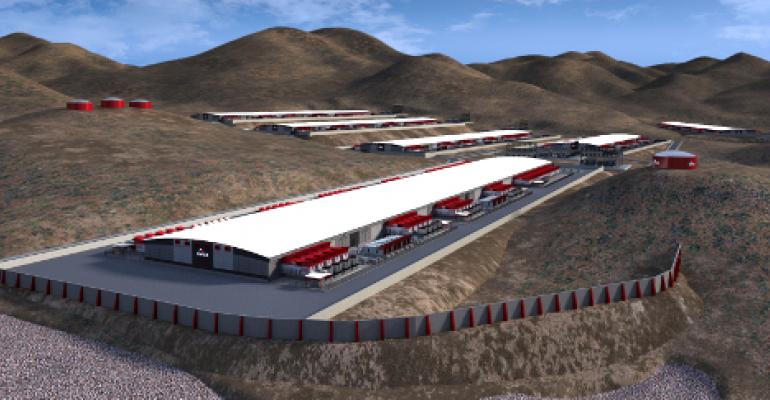 Switch, the Las Vegas-based data center provider that’s building a massive campus in Reno, Nevada, said the first facility there will be the largest data center in the world. The company, known for its huge SuperNap Las Vegas data center campus, with a futuristic interior design and ex-military security personnel, announced plans to build the $1 billion Reno data center earlier this year with eBay as the anchor tenant.

SuperNap Tahoe Reno 1 is only the first phase of development. Switch’s future plans call for as many as seven buildings, mostly of comparable size. The campus will neighbor a Tesla battery manufacturing plant currently under construction.

A mega data center hub of sorts is forming in Reno, which has not historically been a major high-tech destination. Right across the highway from the Switch site is a growing Apple data center campus. Rackspace is eyeing the possibility of building a large data center there as well.

Because companies that don’t sell data center services tend to keep details about their mission critical sites under wraps, it’s nearly impossible to verify with 100-percent certainty that there isn’t a bigger data center somewhere in the world. Switch spokesman Adam Kramer said the company used a dedicated internal team of researchers to confirm that the capacity of the future Reno facility will be bigger than any other data center facility out there.

While companies periodically claim that they are building or have built the largest data center in the world, square footage or amount of utility power available at the site don’t say much about the data center’s actual capacity. What’s more important is the ability to supply enough cooling and conditioned, UPS-backed power.

Switch plans to provide 82,000 tons of cooling for its 150-megawatt data center, which will have a 300MVA substation. A power capacity of 150MW converts to about 43,000 tons of refrigeration. In a typical data center, IT loads contribute about 70 percent of the total thermal output, according to a white paper by Schneider Electric’s data center infrastructure subsidiary APC. The rest of the cooling capacity is consumed by UPS systems, lighting, power distribution, and personnel.

Bigger of course doesn’t necessarily mean better in the data center market, but data center providers and web companies with massive facilities do benefit from economies of scale. Scott Davis, executive VP of operations at DuPont Fabros Technology, said during a presentation at Data Center World in National Harbor, Maryland, this week that the annual cost of operating a 6MW data center would cost about $4 million more than operating 6MW of capacity within DuPont’s latest 42MW facility Ashburn, Virginia. It costs about $5.4 million to operate a stand-alone 6MW data center, compared to $1.3 million to provide 6MW of capacity within the 42MW building, he said.

Operators save primarily because a larger data center doesn’t mean a larger supporting staff, such as security personnel. “A lot of [the savings] is manpower,” Davis said. “Staffing doesn’t need to scale with the size of the facility.”

Much of the savings achieved gets passed on to the data center provider’s customers in the form of lower rates, he said.

Switch’s high-speed network loop will interconnect the Reno and Las Vegas campuses and link to connectivity hubs in Los Angeles and San Francisco. Customers will be able to use the connectivity between Reno and Vegas for the “active-active” resiliency topology, where infrastructure and applications are replicated at two sites and stay on around the clock in both locations.