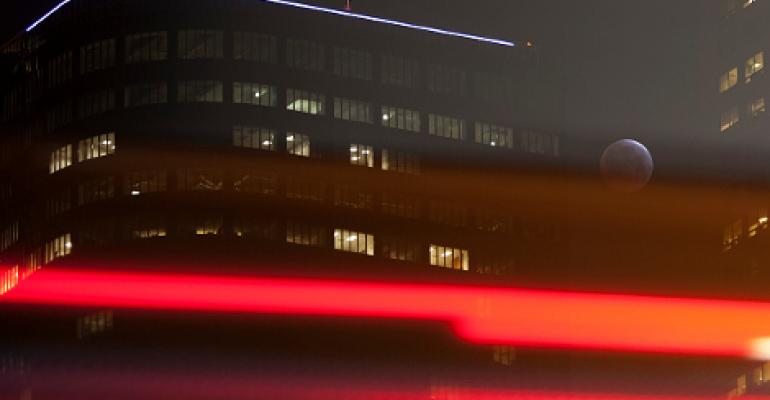 The lights of a transit bus pass before the moon, seen behind downtown high-rise buildings, during the shortest total lunar eclipse of the century before dawn on April 4, 2014 in Los Angeles, California. (Photo by David McNew/Getty Images)
Colocation

The guarantee that customers’ IT equipment will be supplied with air of certain temperature and humidity levels is one of the most important services data center providers offer, on par with the guarantees of uninterrupted supply of power and physical security. Loss of cooling capacity for an extended period of time can lead to failure of customer equipment and prolonged outages.

“CoreSite’s LA1 data center’s customers’ critical power was not affected by the loss of utility power, however, the data center did experience an associated mechanical outage that resulted in increased temperatures exceeding our SLAs (Service Level Agreements),” CoreSite representatives said in a statement emailed to Data Center Knowledge. “Corrective action was taken, and temperatures were restored to normal operating levels.”

Multiple companies operating data centers in the area affected by the blast on Thursday evening reported loss of utility power and said they had switched to backup generators without power interruption to their customers. The biggest impact of the explosion felt by data center customers seems to have been interruption of connectivity on Level 3’s network.

The explosion, whose cause is still under investigation, took place in the basement of a 22-story commercial building at 811 West Wilshire Blvd. around 10 pm on August 20, according to a statement by the Los Angeles Fire Department. Firefighters discovered smoke, blast damage, and a large volume of water from damaged pipes when they arrived on the scene.

Four people suffered minor injuries, and two of them were taken to a hospital, one with a headache, and the other with back pain.

The blast damaged an on-site power station and caused power outages for 12 buildings in the area. The Los Angeles Department of Power and Water restored power to all affected buildings other than 811 Wilshire by Friday evening, according to an LADPW statement.

Level 3’s downtown Los Angeles facility is at 818 W. 7th St. – one block away from the site of the explosion. According to a statement issued by Internap, a data center service provider that provides network connectivity services in the area out of Level 3’s facility, connectivity was interrupted because the facility did not successfully switch to generator power when it lost utility service.

“Level 3 experienced a delay in restoring power via backup generators and, as a result, some customers of Internap's network services were impacted by the outage,” Internap’s statement read. “The site has returned to full utility power.”

A Level 3 spokesperson confirmed it had experienced a network outage in Los Angeles because of a utility power outage but did not provide any details. In an email Monday afternoon, the spokesperson said Level 3’s network was operational and “performing as it was designed to do.”

One of Internap customers who experienced an outage as a result of the explosion was LogMeIn, a Software-as-a-Service company. Craig VerColen, a LogMeIn spokesman, told us the company contracted for data center services in an Equinix facility in Los Angeles through Internap. Internap and Equinix have a partnership whereby Internap provides connectivity services to Equinix customers.

The Equinix data center downtown, called LA2, was in one of the buildings that lost power Thursday night, an Equinix spokesperson said via email. It switched to generator power without impacting customers, he said.