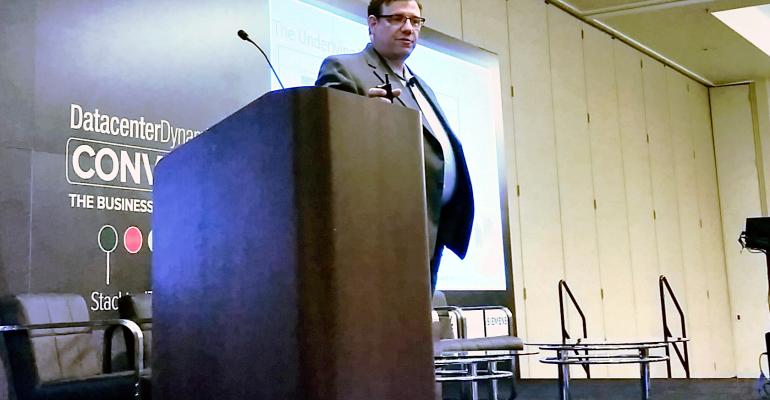 Will report to Dean Nelson after 20 years in AT&amp;T’s massive data center org

Eddie Schutter, who until recently has overseen AT&T’s enormous data center fleet, has joined eBay as head of global data center network and security services. Schutter has been at AT&T for about 20 years.

In his new role, he will be managing the online auction giant’s Global Foundation Services organization, which is responsible for the the entire eBay data center infrastructure. He will report to Dean Nelson, who has led the organization for more than three years.

Nelson is a well-known data center executive who spearheaded eBay’s adoption of some of the industry’s most innovative approaches to data center design, including the use of data center containers, water-cooled IT cabinets, and on-site fuel cells as the primary source of data center energy.

Schutter announced his new role at the DCD Internet conference in San Francisco Thursday. The move is a “big shift for me, obviously,” he said, adding that AT&T’s is a “great data center organization” that has done a lot of things for the data center industry in the past and is doing a lot of things now that will impact it in the future.

AT&T and eBay are obviously two very different businesses, but they both have some common data center challenges. Around-the-clock availability, global scale, and data center energy consumption are challenges most companies that provide services worldwide share.

While most people know AT&T as cellular network carrier, the company has a massive portfolio of data center and cloud services for enterprises. And both telephone users and enterprises demand that their devices and services are always on.

eBay’s Global Foundation Services has traditionally pursued innovative technologies to increase energy efficiency of its data centers. The eBay data center in Phoenix, for example, has a mix of traditional raised-floor space and data center containers by both HP and Dell on the roof.

The newest eBay data center in Salt Lake City, Utah, uses fuel cells by Bloom Energy, fueled by natural gas, as its primary source of power. It relies on the local utility grid for backup and has no diesel generators or UPS systems – both mainstays in most of the world’s data centers.

eBay is currently building a new data center in Reno, Nevada, together with Switch SuperNAP, a data center provider known for its massive Las Vegas data center campus. The facility, Switch’s first outside of Las Vegas, is in the Reno Technology Park, a large site with access to a variety of renewable energy sources that’s also home to an Apple data center campus and neighbors a Tesla battery manufacturing plant.