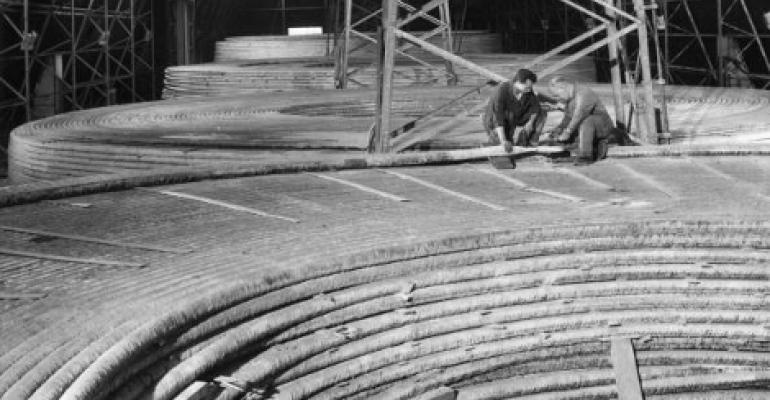 May 1956: Coiled submarine cable in storage at the specially constructed Coiling Down Shed at Trafford Park, Manchester. The cable is part of a $3 million order that will supply electricity between Vancouver and mainland British Columbia. (Photo by Fox Photos/Getty Images)
Colocation

Moving to give customers a more options for connecting data center facilities on the West Coast of the US with Asia, Telx announced support for a new transpacific cable system called Faster. The network of submarine cables will span the Pacific Ocean by 2016, and a Telx data center in the Pacific Northwest will be one of its termination points.

The Faster consortium promises to provide access to the submarine cable system that’s being developed by China Mobile International, China Telecom Global, Global Transit, Google, KDDI, and Singtel. The consortium announced the $300-million project about one year ago. The system is expected to be operational by the second quarter of next year.

New York-based Telx has been a national player and has never had data centers in Asia. But that will change once the acquisition of Telx by its new parent company Digital Realty closes. The $1.9-billion deal was announced earlier this month. Digital has a substantial presence across the Asia-Pacific region, including data centers in Singapore, Hong Kong, Osaka, Sydney, and Melbourne.

Don Schuett, vice president of business development and strategy for Telx, said that by connecting Faster cables to a distribution Point of Presence (PoP) in PRT1 data center that Telx operates in Hillsboro, Oregon, customers will have access to initial capacity of 60 Tb per second.

“Most of the cables crossing the Pacific terminate at a carrier facility,” said Schuett. “We want to be able to give customers access to a carrier-neutral option that terminates inside our facilities.”

Since 2007 the volume of traffic moving between the US and Asia has increased 37 percent. As more businesses become truly global, conducting business in real time across multiple countries, the volume of network traffic moving across the Pacific is only expected to increase, said Schuett.

In fact, scaling up to meet those demands is one of the primary factors driving a wave of billion-dollar mergers involving companies like Telx and Digital. In addition, the nature of the traffic is changing, as organizations begin to embrace multimedia technologies needed to support, for example, video. As such, IT organizations are looking for more direct access to cabling systems around the globe.

While telephone companies have been laying submarine cable between continents since the 19th century, the Faster Consortium is laying fiber optic cable carrying 100 wavelengths at 100 gigabits per second across the world’s deepest ocean. That requires using a new lightweight polyethylene that is only 17 millimeters thick.

Once operational, that level of capacity should not only make it more feasible for organizations to expand their IT operations into Asia, but conversely make it possible of many companies that operate in, for example, China to expand their IT operations into North America. The end result would be a rapid acceleration of globalization enabled by direct access to unprecedented amount of network bandwidth at costs that should be substantially lower than what most carriers provide today.

Correction: A previous headline for this article said Telx had joined the group building the Faster cable system. The company did not join the group, but announced support for the project, and the headline has been changed accordingly.