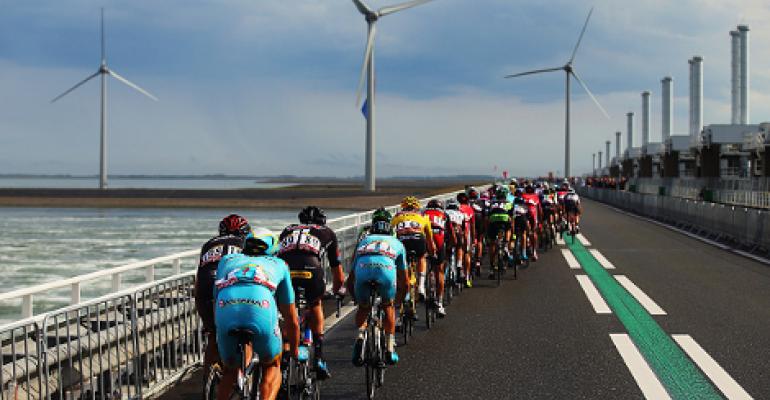 Use of renewables by large data center operators is on the rise, but it’s not easy

The tech sector’s investment in renewables is on the rise, growing faster than any other sector’s, and some of the biggest investments are in connection with massive data center projects.

Just this month, Facebook announced a 200 MW wind-power contract for its upcoming Texas data center, and Amazon said it had invested in a wind farm of similar capacity in North Carolina to address the energy use of its expansive data center cluster in Virginia. Announcements of investment in huge renewable-energy projects by web-scale data center operators like Facebook, Amazon, Google, Microsoft, and Apple are becoming more and more frequent as they try to deliver on their carbon-neutrality commitments.

The household-name tech giants are not the only ones in their sector investing in renewables, but they are in the group of companies that drive the bulk of the spending. “There are a lot of pretty big purchasers, and then it falls off pretty dramatically,” Jenny Heeter, senior energy analyst at the US government’s National Renewable Energy Laboratory, said.

Heeter was one of the authors of a report on renewable energy investment in the ICT sector published by NREL today. Only very rough estimates of the sector’s energy consumption are available, since companies aren’t required to disclose that kind of data. Some, however, disclose it voluntarily through various industry and government programs, and estimates used in NREL’s paper are based largely on that voluntarily disclosed information.

Citing other studies, NREL researchers said US data centers consumed about 91 million MWh in 2013. For levels of renewable-energy consumption, they turned to the Carbon Disclosure Project, a UK organization that promotes corporate disclosure of greenhouse-gas emissions, and the US Environmental Protection Agency’s Green Power Partnership.

There are 113 ICT companies reporting data on their use of renewables through one or both programs. Combined, their operations in the US consumed 59.2 million MWh in 2014 total. Of that, 8.3 million MWh was renewable energy. The researchers acknowledged that the list was not comprehensive, pointing out that data center service providers in particular were largely excluded from the sample.

Out of the 113 companies, 27 used renewables to power 100 percent of their operations. Among them were Intel, SAP, Datapipe, and Motorola. Intel used more renewable energy than anyone else on the list: a little over 3 million MWh. Because it operates its own manufacturing facilities, the chipmaker consumes more energy than others.

Microsoft is the second-largest user of renewables, having consumed 1.4 million MWh in 2014 or half of its total energy use that year, followed by Google, which consumed about 890,000 MWh of renewable energy – about 40 percent of its total.

If one was to use this data to derive an average amount of renewable energy consumed by a tech company in the US, the result would be misleading. Only two companies used more than 1 million MWh last year; one consumed more than 500,000 MWh, and eight consumed more than 100,000 MWh. The list of top 30 consumers ranges from 12,000 MWh to 3 million MWh, with the amounts tapering off steeply as you go down the list.

There are several ways for a company to be able to claim it is using renewable energy, but “unbundled” Renewable Energy Credits are the most common method, responsible for 61 percent of all reported use of renewables last year, according to NREL.

These are credits sold or used separately from renewable energy that’s generated to create them. A company can use 1 kWh of coal energy but buy a REC to apply to that 1 kWh and make it carbon-neutral. One of the ways Google gets RECs is buying clean energy, unbundling and keeping the RECs, and then selling the energy as non-renewable on the wholesale market.

Google gets the energy through long-term power purchase agreements, or PPAs, with producers. Such PPAs are gaining popularity in the ICT sector, especially among web-scale data center operators. One of the big benefits they bring is providing developers with the funding they need to bring more large-scale clean-energy generation capacity online.

Direct PPAs between a customer and a producer that circumvent the local utility aren’t allowed everywhere. In traditionally regulated energy markets, users have to negotiate with utilities, but not all utilities sell renewable energy, which is where it becomes complicated.

In North Carolina, for example, Google and other data center operators lobbied the utility company Duke Energy to create a renewable-energy tariff – a special renewable-energy rate for big customers. Integrating renewables into the overall fuel mix, turning renewable energy into a product, and creating rates for it that make sense for the customer, the utility, and all of its existing customers is a delicate, complicated process, Gary Demasi, director of operations at Google who oversees the company’s data center energy and location strategy, said.

Among web-scale data center operators, Google has one of the most sophisticated strategies for getting renewables. It even has a subsidiary that’s registered as an energy company and has an authorization from federal utility regulators to buy and sell power on the wholesale market.

The Problem of Location

Most of the complexity that’s involved in buying renewable energy for data centers stems from the issue of location. One place may be ideal for a data center, while another is ideal for a utility-scale wind farm. “Those two places are rarely the same,” Demasi said.

Because every state in the US has its own energy market, it’s extremely difficult for a customer to source renewable energy in one state but use it in another. Unbundled RECs and Google’s energy subsidiary are ways around this problem of location.

It’s not this difficult everywhere. According to Demasi, one of the easiest places to buy renewable energy for large-scale data center projects in the world is northern Europe, where Finland, Sweden, Norway, and Eastern Denmark operate a unified utility grid and have deregulated energy markets. There, Google can tap renewable energy in Sweden and apply it to its data center in Hamina, Finland, without much bureaucratic intervention.

Google is now working on getting renewable energy for its data centers in Asia. It also has a data center in Chile, and while the country has “world-class” wind, solar, and geothermal resources, the renewable-energy market there is in its infancy. “We’re very excited about the long-term prospects there,” Demasi said.

It Should Be Up to the Utilities

Sourcing renewable energy on its own or acting as an energy company is not the way Google prefers to go about it. It’s just that in some places it’s necessary. “In markets where utilities are our partners we do believe that they are best-situated to get us the products that we want,” Demasi said. Nobody is better at sourcing energy and delivering it to customers than utilities are.

Having observed it, he empathizes with the painstaking rate-making process utilities have to go through if they want to add renewable energy to their product portfolio. It’s not a small challenge, he said, but “I don’t think it’s a challenge you can’t overcome.”

Visit NREL's website to read the full report on renewable energy use by the ICT sector.

Corrected: A previous version incorrectly stated that Jenny Heeter was the lead author of the NREL report. She was one of the authors, but not the lead author, and the article has been corrected accordingly.