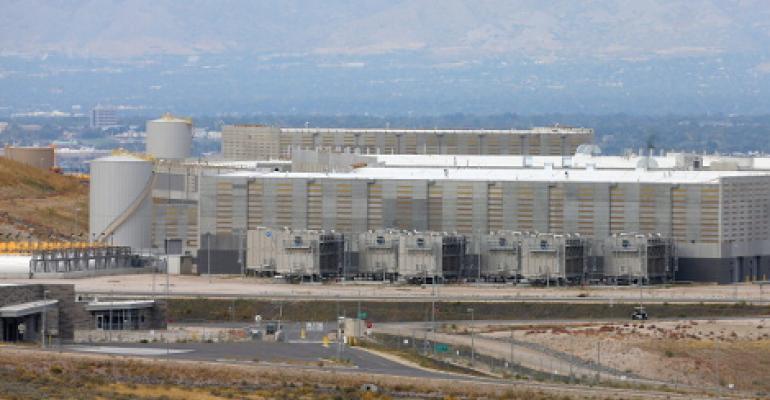 The NSA data center with the Salt Lake Valley in the background in Bluffdale, Utah, in 2013. The data center has reportedly been plagued by power surges that destroyed hundreds of thousands of dollars worth of equipment and delayed the opening of the center for a year. (Photo by George Frey/Getty Images)
Business

Yesterday’s massive United Airlines and New York Stock Exchange outages served as a reminder of just how much the world today depends on reliability of IT infrastructure.

NYSE traced its 3.5-hour outage to a “configuration issue,” and United said it had to ground all of its flights around the world for hours because of a malfunctioning network router. Both were IT problems, but a lot of thought and money also goes into designing resilient underlying data center infrastructure – the power and cooling systems – to make sure IT systems stay online.

The way the most important rating system for data center reliability works has been changed recently. Starting at the beginning of this month, Uptime Institute, a division of the 451 Group, will no longer issue Tier certification for design documents to North American companies that provide commercial data center services, from colocation to cloud.

The Uptime Tier system, which rates data center efficiency on the scale of I (least reliable) to IV (most reliable) has long been criticized for numerous reasons, but the biggest complaint has been the proliferation of misuse of its terminology.

Many data center providers have claimed that their data center design is Tier III or Tier IV without actually going through the expensive process of having Uptime certify their facility. Market benefits of such claims for service providers are clear: higher reliability means more sales.

Complicating things further has been Uptime’s practice of issuing separate certifications for design documents and for constructed facilities. A company could get design documents certified without actually building the facility to those designs. And some did, proceeding to market their facilities as something they weren’t.

All design and constructed-facility certifications are listed on the organization’s website, so it’s very easy to verify data center providers’ Tier claims.

Uptime spokesman Matt Stansberry said the two-year limit was the first step in stopping abuse; this month’s changes were the second.

“The main reason is to prevent folks from using a certification of their design (as) a marketing tool for their facility, when they haven’t actually certified the facility,” he said. “There’s a lot of things that can change between that plan and the final facility.”

Uptime has received lots of complaints from data center providers that had gone through the expensive facility certification process and were competing for the same business with providers that had not certified their facilities but claimed that they had high tier ratings, Stansberry said.

Colorado-based ViaWest was the subject of a complaint that came to the State of Nevada Attorney General, accusing the data center provider, owned by a Canadian telco called Shaw Communications, of misrepresenting the Uptime Tier rating of its Lone Mountain data center in Las Vegas.

Chris Crosby, CEO of Compass Datacenters, which has received Tier III constructed-facility certification for six data centers, said in a blog post that the practice of claiming Tier III or IV certification based on design documents alone was “patently deceptive, since customers believe the facility has been constructed to meet certification criteria, when in fact it hasn’t.”

Another data center provider that has been complaining actively is Switch, a Las Vegas-based company with a massive campus there called SuperNAP. Switch is currently building another huge SuperNAP in Reno, Nevada, where eBay will be the anchor tenant.

The company has been complaining about abuse of the Uptime Tier system and even indicated to the organization that it would not pursue facility certification in the future if it doesn’t change its rules, Rob Roy, Switch founder and CEO, said in an interview.

“It’s really sad that our industry has devolved to the point where (many) data centers misrepresent something about their sites,” Roy said.

The recent changes by Uptime were a welcome development for Switch. “We’re 100 percent behind this,” Roy said. “Really happy that Uptime’s doing stuff.”

Changes in the Uptime Tier certification policy apply only to companies that make money by providing services out of their data centers and only to companies in North America. They apply to “folks who basically sell computing capacity in some form,” Stansberry said.

It’s not beneficial for enterprises that operate their own data centers to support their IT needs to misrepresent their facility Tier rating, because they don’t compete for customers. A design certification is a useful benchmark for enterprise data center operators and can be an “important milestone,” Stansberry said.

Uptime will not annul design-doc certifications it issued before the changes went into effect on July 1 retroactively, Stansberry said.

Similarly, design certifications that were issued before the two-year expiration period was put in place in 2014 will not expire.

“That doesn’t mean we will not find a way to identify all ‘stranded’ design certifications in the future,” he said. “It just means that they won’t expire.”