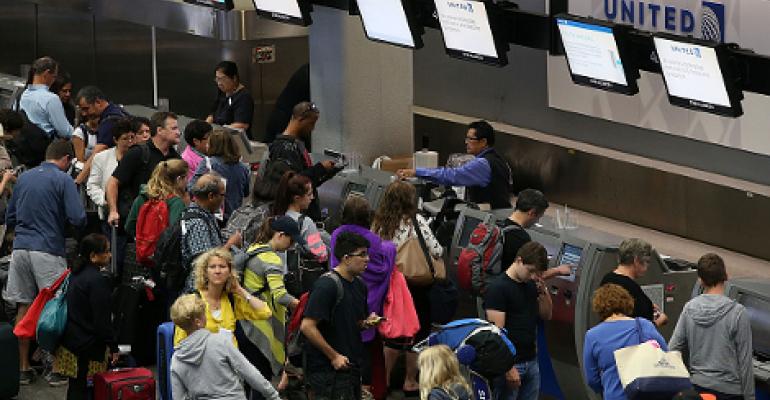 United Airlines passengers wait in line to check in for flights at San Francisco International Airport on July 8, 2015, in San Francisco, California. Thousands of United passengers around the world were grounded Wednesday due to a computer glitch. (Photo by Justin Sullivan/Getty Images)
Design>Networks

United Airlines Grounds Flights Due to IT Issues

United Airlines’ US flights were grounded for over an hour due to “automation issues,” according to the US Federal Aviation Administration.

The airline issued a statement saying a network connectivity issue kept flights grounded, however, little more information has been made available so far. The ground stop began around 8:30 am EDT Wednesday and was finally lifted around 9:50 am. The airline is in the process of looking into the issue and flight delays continue into the day.

A lack of “proper dispatch information” kept flights grounded for less than an hour last month as well. In 2012, issues with the merger between United and Continental were credited with causing significant systems outages in August and again in November.

Any issues with individual airlines often have a butterfly effect, affecting air travel beyond just the airline.

IT issues disrupting air travel is a periodical occurrence. As we wait for more information on United's debacle, let's take a look back at a few incidents from recent history:

A Sprint cable cut in Wisconsin hobbled Alaska Airlines’ connection to Sabre, a reservation and ticketing system. It was a good example of how something as simple as a fiber optic cable cut can be felt thousands of miles away.

An outage in a key reservations system kept flights grounded for a day. An early tweet from the company blamed downtime problems with the Sabre reservations network but was later corrected to say it was an issue in its ability to access Sabre -- a network issue. Sabre said it was up and running fine with all other airlines.

This entry also appeared on our strangest outages countdown. A leap second is a one-second adjustment that is occasionally applied to Universal Time to account for variations in the earth’s rotation speed. The latest leap second happened June 30 this year.

A leap-second bug in 2012 caused computer problems with the Amadeus airline reservation system, triggering long lines and traveler delays at airports across Australia. More than 400 Qantas flights around Australia were delayed by at least two hours as staff switched to manual check-ins. The outage at Amadeus, one of the world’s major reservation systems, lasted about an hour but had a longer impact on air travelers and airline staff.

For more of a feel-good story, also check out Amerijet's discussion of modernizing its IT at a Data Center World conference put on by our sister company AFCOM. Senior director of technology Jennifer Torlone spoke about where the company was when she arrived on the scene and how it ultimately modernized its systems.